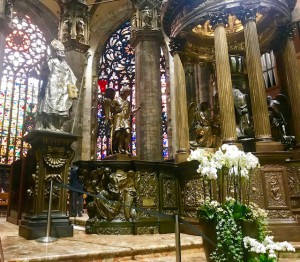 With 24 hours to experience Milan, the fashion capital of Italy, I could not wait in a long line of tourists to enter the dramatic Duomo di Milano, so I decided I would enter by attending Mass the next morning – when there is no line or entrance fee to enter the world’s fourth largest cathedral. With much more patience than I had, the soaring Duomo was built over six centuries beginning in 1386. Thanks to the trusted advice of ICBellagio.com, Italy’s top custom, personal tour designer, I was staying right around the corner in the city center off the piazza in a former palazzo now known as the Park Hyatt Milan. I checked the posted Mass schedule outside the Duomo and planned to return for 7:15 a.m. Mass the next morning. I then spent the remainder of the evening checking out Milan’s fashion scene, eating arancini and drinking Peroni Nastro Azzurro at street side cafes. My day culminated by luxuriating in the steam room and heavenly, candle-lit soak tub of the Park Hyatt’s soulful spa. (The Hyatt’s concierge also managed to procure for me the most elusive ticket in town: a viewing of Leonardo da Vinci’s 15th century mural “The Last Supper.”)

7:15 a.m. came early, and I had to delay enjoying the Park Hyatt’s elaborate breakfast buffet (included with the room) in La Cupola under a 30-foot glass dome in order to get around the corner to Mass. I discovered all the main front doors of the cathedral were sealed, though. The historic Duomo’s massive footprint covers more than a city block, so by the time I found the small open door around the building’s backside and made my way through the vastness to creep up to the elevated back altar, I was very late for Mass. My rubber shoes squeaked with every step on the marble floor, which disrupted the small group of worshippers gathered. (I know because they all turned their heads to look.) When I finally found a pew, the Lord’s Prayer (which comes late in the Mass) was already being said. That’s when I realized my mistake – the Mass, for which I was already late, had started at 7 a.m., not 7:15 a.m.. (Arriving when I did was like turning on Star Wars after a light saber fight.)

Mass, which was spoken in Italian, ended quickly, so I decided to stay and wander the now empty Duomo. The Mass-goers were gone and the tourists had not yet been allowed in. So, I gazed at the 40 gothic columns supporting the ceiling 148 feet above which covered the sculpted statues, compelling works of art, and relics – including a nail from the crucifixion below it. The Duomo’s design has been controversial; Mark Twain liked it, but Oscar Wilde didn’t. I, full of solemn wonder, had the place to myself and was snapping photos until an attendant seemed to come from nowhere and took his turn snapping. . . at me: “No photo, per favore. No!”

Embarrassed yet again, I began to sulk toward the exit. The sunrise light was streaming through the 68-foot colored stained-glass windows, but it was a tiny green light way back in one of the empty side altars that caught my eye. When I got close to investigate it, I realized it was one of the old-fashioned signal lights over an ornate, wooden phone booth-sized confessional box. I admired the craftsmanship by peeking into the darkness behind the curtain, but was then started by a sound coming from inside.

My Duolingo app study of remedial Italian had taught me “pronto” means “ready.” Someone sensed I was there, so I felt compelled to respond and enter the box. Once inside, I found myself kneeling in front of a window face to face with an old, Italian priest. It’d been two years since I’d done this, so I began wobbly reciting the customary formulaic recitation of, “Forgive me, Father, for I have sinned. . .”

The white-haired priest stopped me, gently, and asked me with a shrug and a heavy accent, “Please-a. . . speak slowly. My English is, eh. . .”

In the subsequent confession of my sins I spoke as much Italian as I could manage – and the priest conveyed his inspirational message of reconciliation effectively in his broken English. At the end he gave me a card and instructed me to read the “Act of Contrition” aloud in Italian, which we did, with him guiding me, together. It was a divine duet. My sins, even being late for Mass in squeaky shoes and snapping forbidden photos (among others) were forgiven.

I emerged from the confessional box touched and surprised. Upon reflection, which the Duomo easily inspires, I became amazed at the chain of events which steered me to that solitary moment. I misunderstood the Mass time, and because I was extra late after initially being unable to find an open door, I lingered longer in other areas of the huge but empty cathedral (instead of hustling back to the Park Hyatt’s breakfast.) It was then and there I “saw the light” (the green one) and “heard the calling” (“pronto.”) Coincidence? You decide.

Visit ICBellagio.com to maximize your visit to Italy.