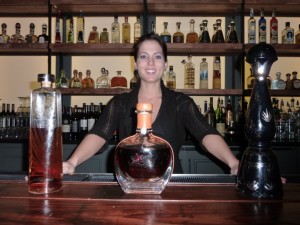 My TAP Golf Road Warrior pals (broadcaster and golf historian Peter Kessler and writers Jeff Wallach, Tom Bedell, and Terry Moore) are heading off  to Scottsdale so I thought I’d wish them well and post this blog about the fun I had last year at the Phoenix Open. And although I know you’ll do your research guys, keep in mind that Fairmont’s tequila bar  at La Hacienda offers nightly artisan tastings and features over 200 varieties of tequila from 36 different labels presented by a Tequila Goddess. If you’re going to drown your sorrows, do it with a Goddess.

Among its many attributes, the Fairmont Scottsdale Resort is located beside the famous TPC Stadium Course, home to the Phoenix Open, also known as the Greatest Show on Grass.

Last winter I attended the fabled Waste Management (formerly FBR) Phoenix Open. I assure you that it’s not like any other major golf tournament on the planet. Imagine frat house revelry at a football game.

On the par -three 16th hole, the bleachers are packed with fans who cheer or boo the golfers depending on whether or not they nail the green. Carrying an alcoholic drink seems to be mandatory.

After the game, a huge tent called the Bird’s Nest becomes party central. As one local observed, “it’s the greatest concentration of cosmetic surgery on earth. I was wondering if perhaps there was a two-for-one (pardon the pun) on breast implants. There’s nothing staid about this event and that’s just fine in my books; anything that gives golf a friskier, sexier image is good for the game. (Tiger excepted).

Dates for the 2012 Waste Management Phoenix Open are January 3 to February 5.