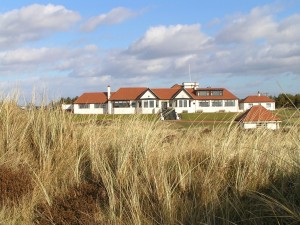 Most North American golfers who make the pilgrimage to Scotland have the usual bucket list of courses to play before they take up curling. But I’m willing to bet that Western Gailes Golf Club isn’t usually on their radar. Oh, but it should be.

Formed in 1897, Western Gailes has hosted plenty of championships and has been often used for final qualifying rounds when the Open is played at Turnberry or Royal Troon. It’s been rated 35th in the Top 100 courses of the British Isles.

If you talk to a knowledgeable Scottish golfer, he’ll probably tell you that Western Gailes is one of his favourite courses on the Ayrshire Coast. Take heed.

Who designed it remains a bit of a mystery. The credit goes to four golfers from clubs in Glasgow who discovered this prime piece of links land between  the Glasgow and South-Western railway and the sea. Back in the early days, members arrived from Glasgow by train.

Probably it was the happy collaboration of some of the founding members who laid in out in a racetrack-style pattern around the clubhouse. This means that you usually get to combat the winds from multiple directions. There isn’t a weak or forgettable fairway at Western Gailes which has a wee bit of everything—from undulating greens set  in the folds of the Oceanside dunes to a  meandering burn to a plethora of pot bunkers.

Even though Western Gailes is a traditional style club and members must arrive and depart wearing jackets and ties, it’s by no means stuffy; guests are given a very warm welcome (and they don’t have to adhere to the member’s dress code; so don’t bother packing your blazer and tie).

When we Road Warriors arrived, Jerry Kessell, the club manager and secretary, had arranged for caddies and some members to play with us. On the first tee, with luck, you’ll meet Henry, the starter, who has been with the club for several decades. Rain or shine, the ever-beaming Henry hands out scorecards and tees and wishes you a merry round.

I must say that it was a jolly round indeed, made all the more fun by my caddie, Hamish Gaffney, who has been shouldering the bag at Western Gailes for almost 30 years. Hamish has caddied for Tom Watson, Wayne Gretzky and Bubba Watson, to name a few. He sized me after the first hole and from then I just took the club he handed me and endeavoured to follow his sage strategic advice. He elevated my game. He also kept me smiling with his corny jokes (“That’s a Clark Gable. Why? Because it’s gone with the wind.”) Despite his excellent advice I managed to land in so many bunkers, Hamish offered to sign the rake, “as a souvenir of our time together.”

We finished our round late afternoon and spent a very convivial few hours in the clubhouse bar with Jerry and our new friends. I doubt that there’s a lovelier place to knock back a couple of gin and tonics than here with the sun-drenched view of the 18th hole, the Atlantic Ocean and windswept dunes beyond the window.

The course plays hard and fast but the clubhouse should be enjoyed at a leisurely pace with good company and a few libations. When you come to Western Gailes, try to book Hamish as your caddie. Please give him my best and wish him well in his next darts competition.