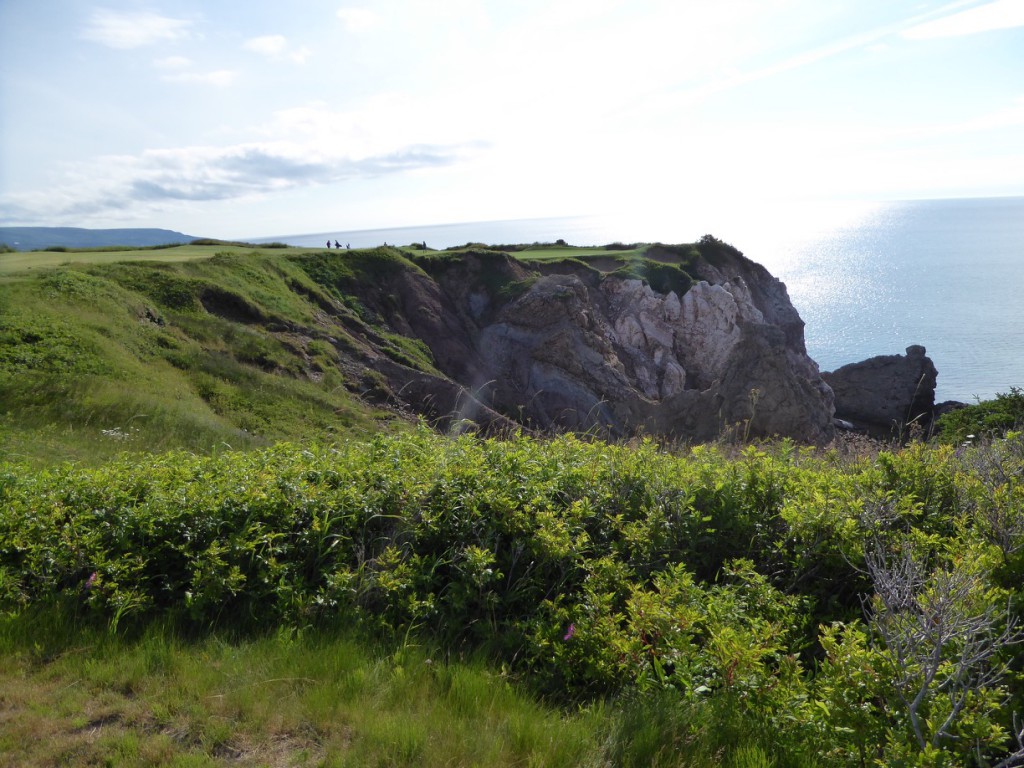 When Cabot Links opened in 2012 it caused a sensation in the golf world as Canada’s first and only true links course. How fitting that the game that was born in Scotland traversed the ocean and took root in Inverness, Cape Breton, first settled by Highland Scots in the 1800s and still a place with strong Celtic traditions.

This summer, the folks who own Cabot Links (Toronto-born Ben Cowan-Dewar and Mike Keiser of the highly ranked Bandon Dunes in Oregon) opened Cabot Cliffs by the acclaimed design team of Bill Coore and Ben Crenshaw. Global Golf Post described it as reminiscent of “Pebble Beach on steroids.” The official opening is next summer, but some lucky golf writers and resort guests had a sneak preview this summer. If Cabot Cliffs isn’t ranked the number one course in Canada, if not North America, I’ll eat my putter.

Golf architect Bill Coore remarked about his design of Cabot Cliffs, “the greatest curse in life is extreme potential.” His partner, Ben Crenshaw added, “We’ve seen a lot of golf courses, but I don’t think I’ve ever seen a prettier sight than this one right here. Right on the Gulf of St. Lawrence, it’s got gorgeous undulations and the movement of the ground is graceful. 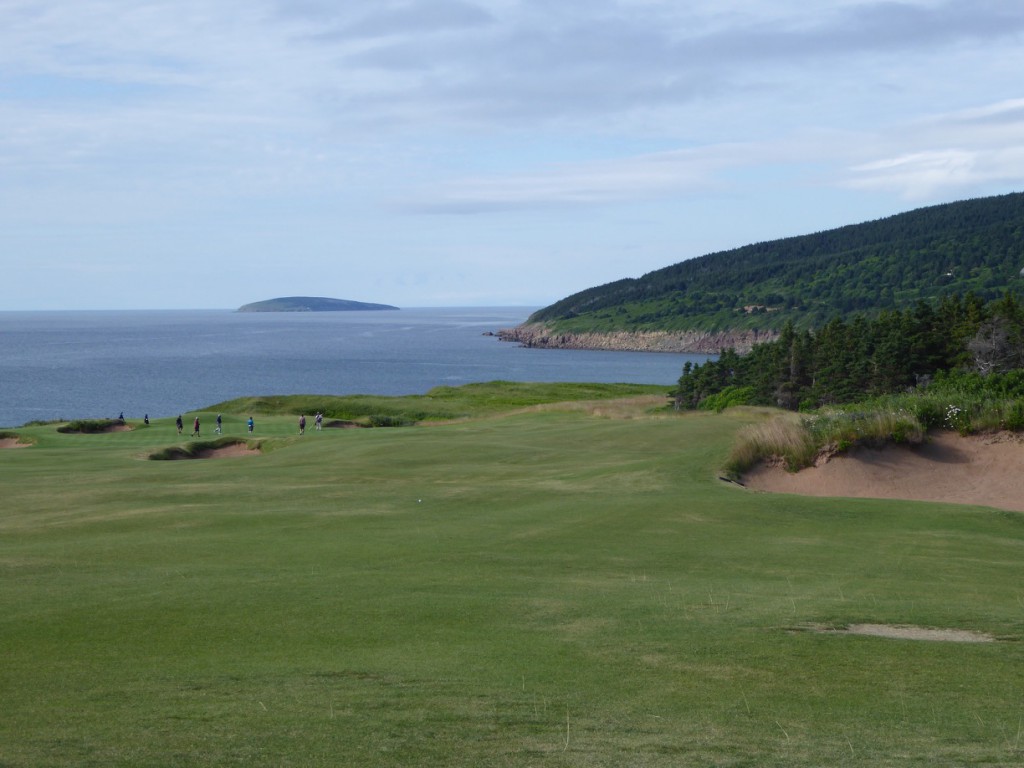 In the Gulf of St. Lawrence Margaree Island looks  like Ailsa Craig

Indeed, the fairways tumble and twist down from a forested glade high above the sea. They meander up and over dunes, cross meadows and ravines and skirt ragged cliffs. There’s an empathetic harmony between the golf course design and the rollicking terrain—an ebb and flow with endless sea views. And although there’s no lack of WOW factor, a romp over Cabot Cliffs feels natural. There’s a rhyme, a reason and a natural rhythm to this masterpiece. 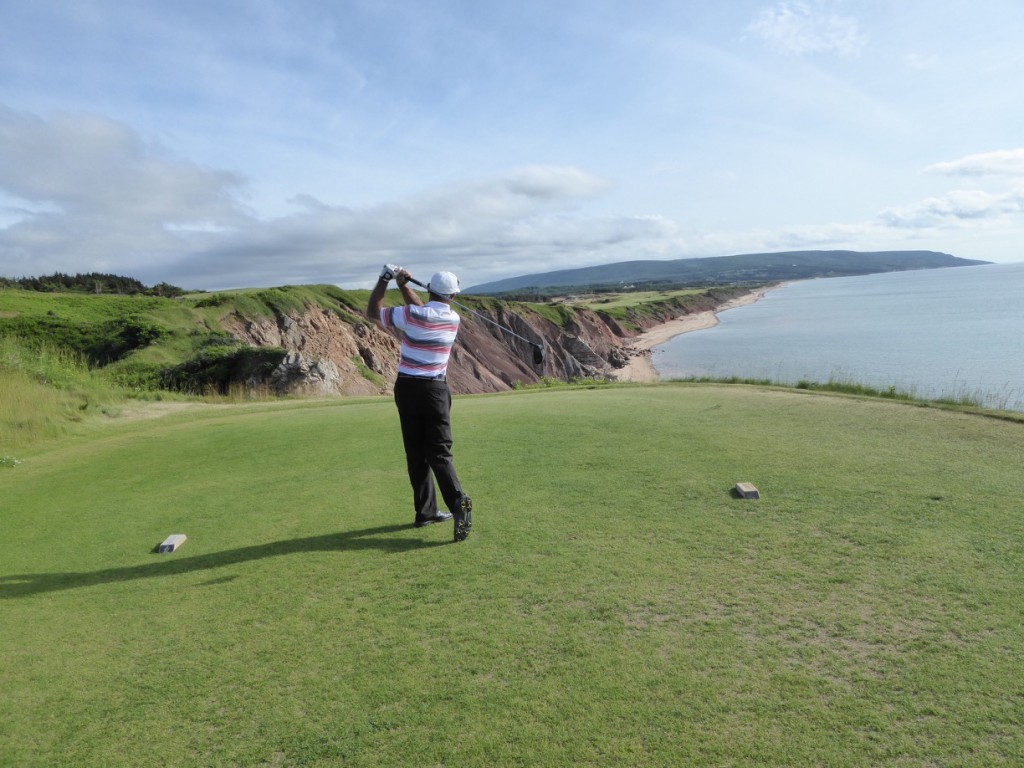 I played with golf director Joe Robertson one fine afternoon this past July. The temporary clubhouse is a yurt and the driving range is still to come, but the course was in remarkably good condition considering it had been open for one week. Standing on the first tee at Cabot Cliffs, inhaling the briny air, feeling the wind rustle my hair, watching the russet fescue swaying, I wondered if maybe I’ve been transported to Scotland. Furthermore, that round island in the Gulf sure looks like Ailsa Craig at Turnberry on Scotland’s west coast. It’s uncanny.

“Is Mike Keiser so rich that he can afford to tow the Ailsa Craig across the Atlantic Ocean?” quipped another golf writer. No, the locals call this Ailsa clone Margaree Island (it’s real name is Sea Wolf).

There’s not a weak hole at Cabot Cliffs and many you will never forget. Number six, a par-three 186-yard gem resembles something you’d play in the British Isles. The green is positioned in the bowl of a cluster of dunes—memories of the Dell at Lahinch in County Clare, Ireland.

What differentiates Cabot Cliffs from typical Old World links courses is that along with the ocean, fescue, craggy bunkers and dunes, you will encounter a forest starting on the spectacular 7th hole, plus the most intimidating tee shot on the course with a forced carry that looks longer than it really is. 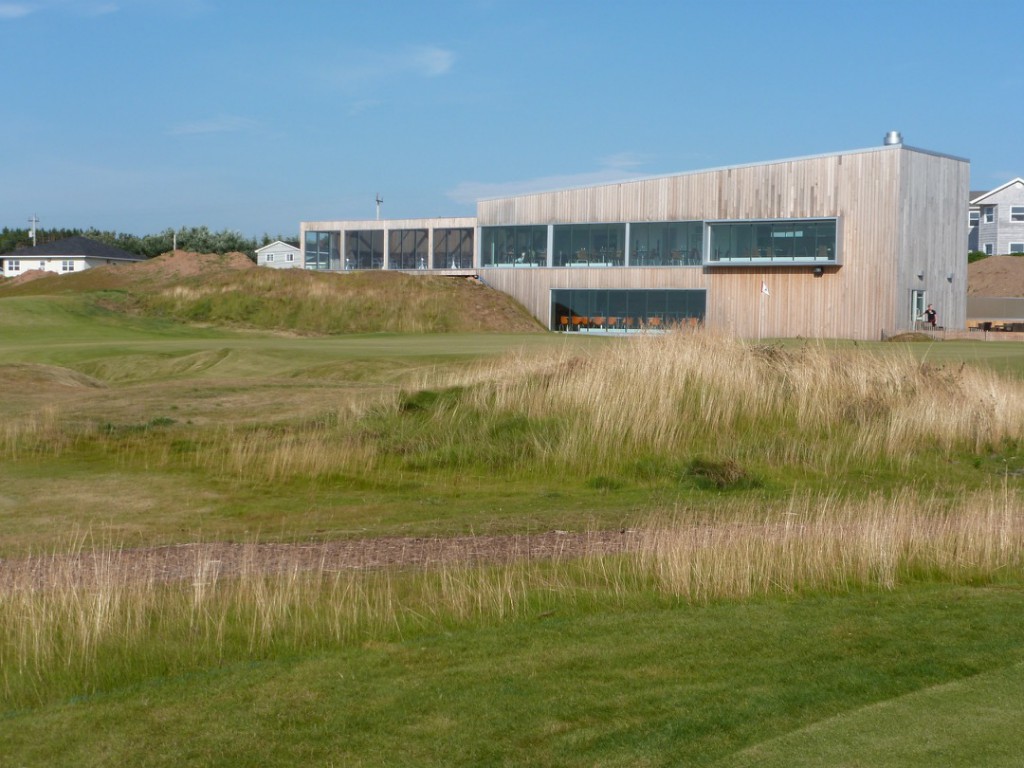 On the par-three, 14th, a huge rock outcropping surrounded by bunkers to the right of the green stands ready to deflect any errant shots. The designers could have bulldozed this rocky attraction out but wisely opted to make it an integral part of the design.

The most photographed parts of Cabot Cliffs are the green at 16 and the tees at 17, both located on jagged, windswept promontory. Number 17 is a cliff-hanging drivable par-four. Once you tee off over the chasm, the roll of the fairway propels your Titleist towards the green. Birdie this one and you’ll be on cloud nine. 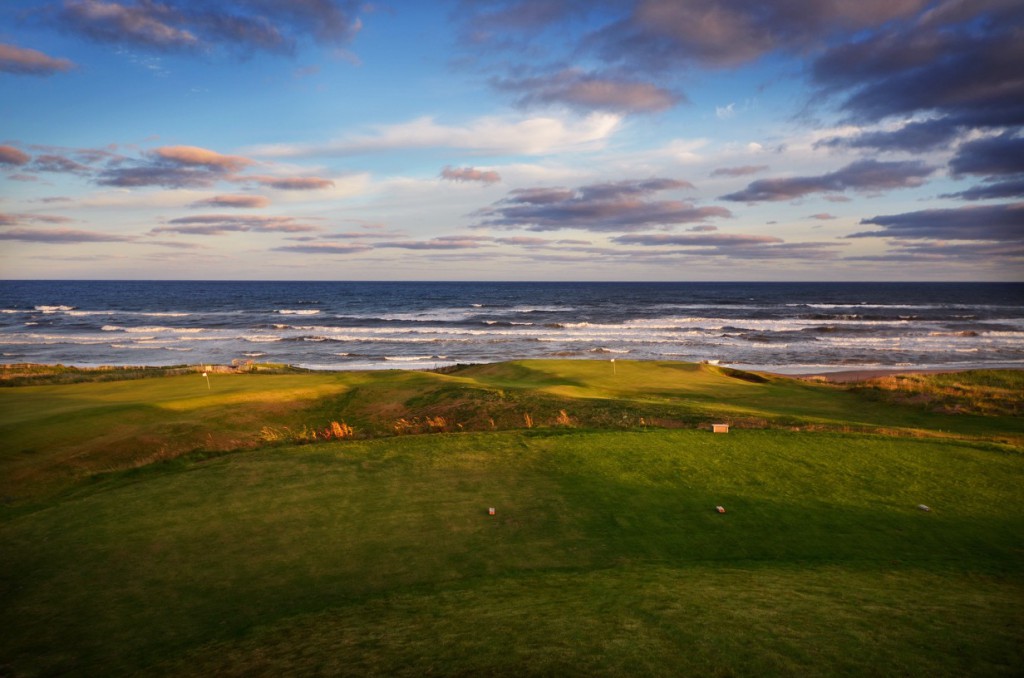 I believe the first course, Cabot Links, is now even better due to new routing. The first four holes were previously numbers six to nine. Actually, the present routing was in the original plan. Now the first hole offers a gentler handshake to your round and if you only want to play nine holes, you now finish back at the clubhouse.

In keeping with true links traditions, Cabot Links is planted from tees-to-greens with 100 percent fescue. Drop your first putt and you’ll be rewarded with the sound of it clinking into a tin cup. You don’t have to hire a caddy but I highly recommend doing so the first time playing both tracks. Our caddies, Steve and Keith from Inverness gave us lots of valuable tips, especially about how to negotiate the cleverly contoured greens. They also provided local colour. Commenting on one of my badly struck shots, Keith remarked, “That’s what we call a mother-in-law. It looked good leaving but didn’t go far enough.”

Unless you have a medical condition, you do have to walk both courses. And what a joy that is, especially around numbers five and six that play around MacIsaac’s Pond where lobster and crab boats bob in the harbour. Numbers 14 to 16 play right along the beach. With luck you’ll spot dolphins or whales while you practice your bumps and runs, plus every other shot in the book. Number 14, a nod to the famed seventh at Pebble Beach, is a short 100-yard, par-three with a downhill pitch to a peninsula green jutting into the water.

The philosophy at Cabot is similar to that at Bandon Dunes. Nothing supersedes the fantastic golf experience. That said, guests enjoy well-designed rooms with floor to ceiling windows overlooking Cabot Links and the Gulf of St. Lawrence. The building incorporates local materials, such as cedar and heavy timber combined with a timeless and modern aesthetic. Stenciled on every door are clever quotes by famous golfer characters. Mine, by Harry Vardon, read, “Don’t play too much golf. Two rounds a day are plenty.” The heavenly Beltrami bed linens are custom-made for the resort in Italy. Amenities such as walk-in rain showers, l’Occitane toiletries and Nespresso coffee machines all add up to a top-notch resort experience.

In addition to the 48 rooms, new two and four-bedroom villas are for sale. These units will also be available in the rental program. Each villa is totally equipped with top end appliances, tasteful furniture and state-of-the-art kitchens and bathrooms.

The management team fully intends to make Cabot Links a world-class golf destination where everything, including the cuisine, scores a “ten out of ten.” They are obviously doing things right: at the 2014 Canadian Tourism Awards, Cabot Links took the “VISA Canada Traveller Experience of the Year” prize.

John Haines and Tracy Wallace, Cabot’s husband/ wife chef team, both born in nearby Antigonish, are fully committed to the owners’ lofty mandate. John was trained in the classical French style. Tracy is self-taught and brings a more modern dynamic to her dishes. Tracy also loves foraging for local ingredients, something she learned from her grandmother. They make absolutely everything from scratch and butcher every piece of fish caught daily in the Gulf of St. Lawrence. Meat and poultry are sourced locally and most produce comes from their spring-fed garden. 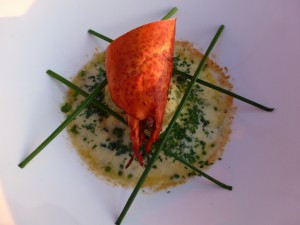 Everything on the menu is good but some dishes are outstanding. The award-winning chowder will never go off the menu. Some guests, including yours truly, request it for breakfast. The lobster ravioli is so rich and decadent it should probably be declared illegal. Go for it.

Panorama is the main restaurant, but now you can enjoy casual fare until the wee hours at the recently opened the Cabot Public House on the property. They bought a Moretti Forni, the Italian “Lamborghini” of pizza ovens. Specialties include thin crust Italian-style pizzas and local craft beers. Also new, The Downstreet Coffee Company on the main street of Inverness, serves baked goods, coffees made by baristas, soups, sandwiches some specialty items such as truffle and olive oils. It’s a great spot to mingle with the locals over a coffee and scone. You can also buy a fresh baguette and fixings to take a picnic to the beach. Who could have ever guessed that Inverness, a former coal-mining outback would become a world-class golf destination with cappuccino baristas and truffle oil on the main street?

At the end of a memorable day on the links, tucking into some fabulous seafood in the Panorama restaurant, watching the sun slide into the St. Lawrence while the last golfers sink their putts on number 18, is about as good as it gets. The folks at Cabot Links deliver golf as it was meant to be played and life as it was meant to be lived.