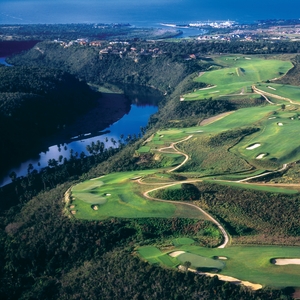 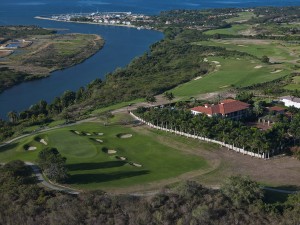 Dye Fore is humongous. Think wide tilting fairways, massive greens teetering over cliffs, whopper bunkers and flat lies few and far between. Maybe mega numbers on your scorecard. Seven holes plummet 300 feet down to the Chavon River. Warning: not for those with fear of heights. Hal Phillips described a round here as “extreme golf.” It’s a brilliant contrast to the seaside Teeth, thus affording golfers a drastic change in scenery and strategy on all three nines: Marina, Chavon and Lagos. Assistant golf director, Raul Cendoya, played a few holes with us and confirmed that scenes from both Rambo 11 and Apocalypse Now were filmed here. We warriors felt right at home.

Gilles Gagnon whose has been director of golf at Casa since 1980 succinctly sums up the golf here: “When you finish playing The Links you usually have some energy left. When you walk off Teeth, you’re tired. But at the end of a round on Dye Fore, you’re exhausted, the tank is empty.”