Consider this remarkable risk/reward scenario. Back in 2007, Rich Mack, a golf fanatic and mining executive with The Mosaic Company, has the brainwave of building two courses in the middle-of-nowhere Florida. Keep in mind that the state is already glutted with courses, the golf industry is in a big slump and the site is a 16,000-acre former phosphate mine. The odds don’t sound promising for Streamsong.

But Mack hires the current “rock stars” of golf architects: Bill Coore and Ben Crenshaw of Coore & Crenshaw and Tom Doak of Renaissance Golf Design. He recruits Alfonso Architects to construct a hotel that some might describe as industrial modern. Others have likened the stark exterior architecture to a hospital, prison or insurance building.

Lo and behold, the Coore & Crenshaw Streamsong Red and Doak’s Streamsong Blue both open in January 2013 to rave reviews.  In 2015 Golf Magazineranks them in the “Top 100 Courses in the U.S.” Golf Digestnames Florida’s Streamsong “Best Public Golf Courses in Florida,” also in 2015.PUBLIC GOLF COURSES IN

The accolades continue to pour in and this risk/reward long shot proves to be such a success that a third Streamsong Black by renowned architect Gil Hanse (who built the course for the 2016 Rio Olympic Games) opened in September 2017 and was named “Best New Course of the Year, 2107,” by Golf Magazine.

Golf at its Purest

To make room for the first 36 holes the architects collaborated on the routing at the same time. A bit of trivia: the Red and Blue courses were so named because Coore and Doak were working side-by-side on their drawing boards and those were the colors of the markers each was using.

Millions of years ago the land that is now Streamsong was covered by oceans and giant sea creatures. Thick forests and grassy plains provided refuge for mastodons, rhinos and huge crocodiles. Warm waters were filled with prehistoric marine life including the giant shark whose skeleton is on display in the hotel lobby. Glacial activity caused the oceans to rise and fall over a million years. My caddie Greg told me that he has picked up hundreds of sharks’ teeth along the paths.

The Streamsong Red and Blue courses are kind of like cousins in that they bear a family resemblance: Red is tighter off the tee and easier on the greens; Blue is more forgiving off the tee but with tougher more undulating greens. Both are links-style with firm, fast fairways and greens thanks to the sand base.

By the third hole on Streamsong Red, my caddy had pointed out eight sizeable alligators and several rusted pipes left from mining days to preserve historical context. Tee blocks are made from railway ties from the track shipped the phosphate.

For me the Red’s signature hole has to be the 240-yard par-three 16th with a carry over water, some of the deepest bunkers at Streamsong and a Biarritz-style green that’s 78 yards long with a nine-foot swale. “Aim towards the wooden stairs as balls will funnel downhill to the green and do not go left,” instructed my caddy. From the tips, and 520-yard 18th, its green framed by gargantuan sand dunes, creates a grand finale for the 7,148-yard romp. 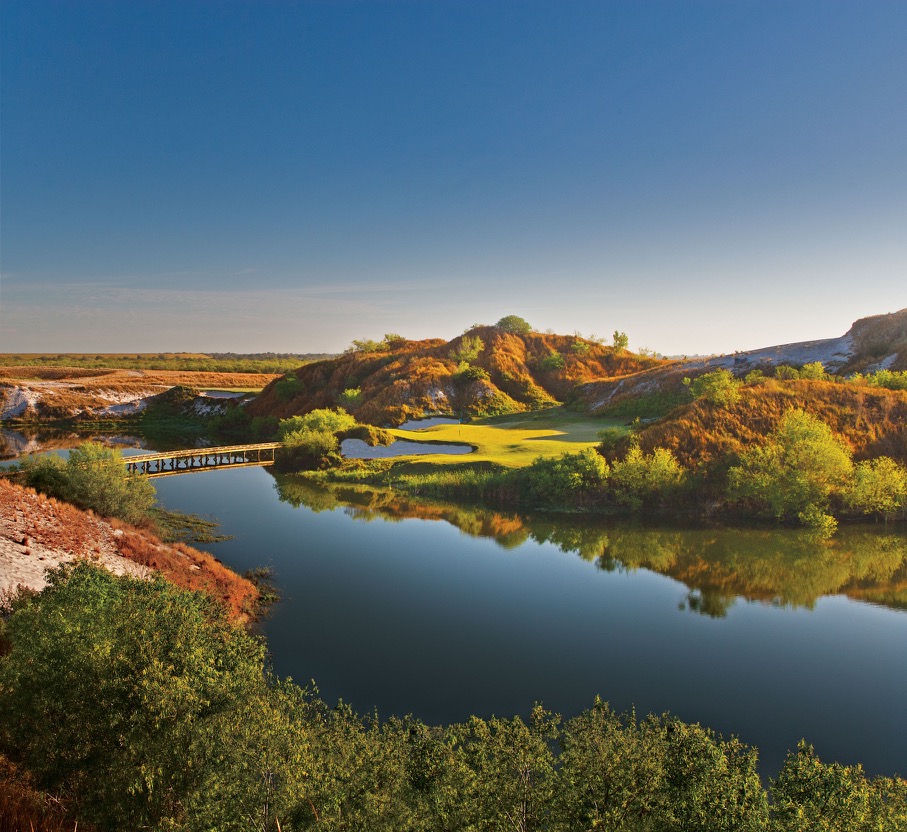 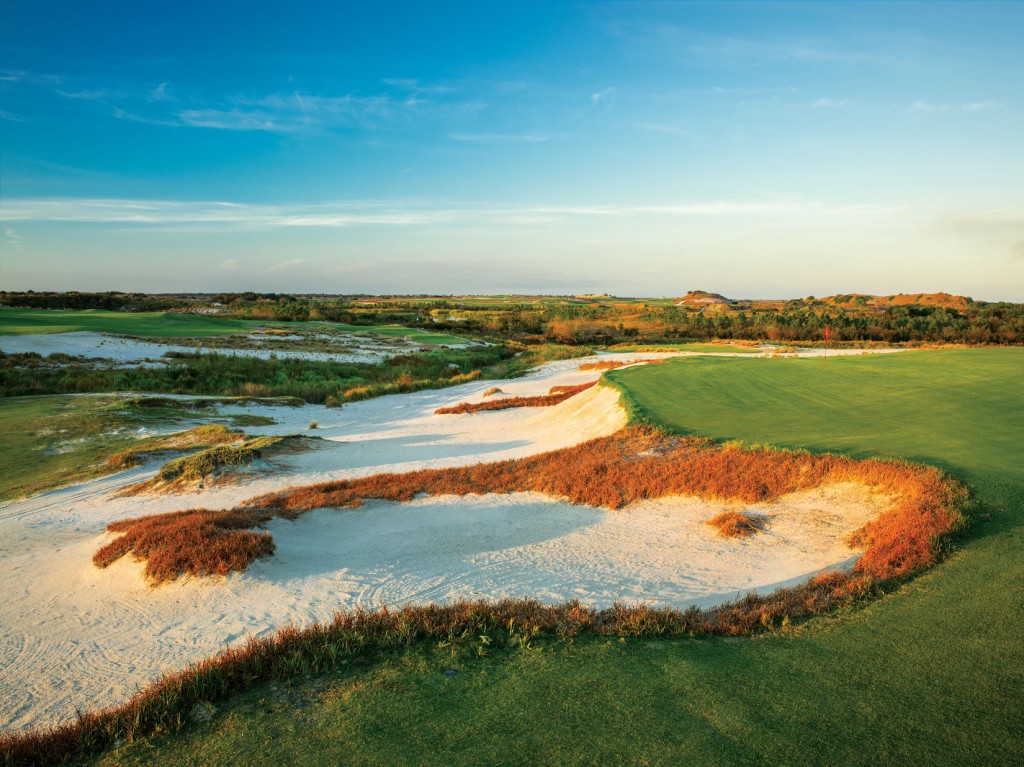 In the spirit of “golf at its purest,” the Streamsong management encourages players to walk its courses with caddies. There are certain tee times for walking only and other times when carts are allowed. And there is not a real estate community in site to detract from the experience, reminiscent of the wild ancient links of Scotland. I honestly had to give myself a shake and remind myself that I was in “nowhere Florida,” and not in the Scottish highlands.

After the round, golfers head to the Streamsong Clubhouse for more fun and games. Upstairs there are twelve guest rooms and a “man cave” Albatross Room outfitted with billiard and poker tables, board games, television and all the amenities a group of swingers would want to unwind after a day on the links. 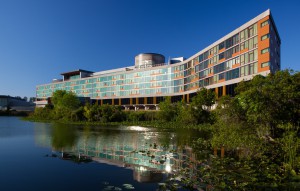 There’s nothing superfluous about the 216-room hotel. Some might opine that the exterior looks more like a hospital than a luxury resort. But step inside and the floor-to-ceiling windows fill the lobby with light and a view of a sparkling lake. Most rooms have unobstructed views of the water and are outfitted with quality everything—from fine bed linens to handsome furniture and plush robes. Dollies and fluff are not part of the Streamsong vision.

There is nothing streamlined about the dining options at Streamsong. The main resort has two restaurants and a poolside bar called Hemy’s. P205 (that’s chemistry speak for phosphate) offers plenty of southern specialties. If calories aren’t an issue, order the buttermilk fried chicken with mashed spuds and Tabasco gravy. Sotto Terra serves fine Northern Italian fare. Restaurant Fifty-Nine in the Clubhouse for Red and Blue specializes in prime aged beef and seafood. The Bone Valley Tavern at the Black course serves gastro pub dishes, such as wings, nachos and burgers.

The AcquePietra Spa is a grotto sanctuary with six pool experiences and a menu of relaxing and rejuvenating treatments.

In addition to trophy golf, Streamsong offers tennis, clay shooting, archery and catch-and-release fishing. I went angling with a guide named Eric and after about five minutes I caught a four-pound Big Mouth bass. The lakes, created by the excavations for the phosphate mining, are connected by a stream—maybe that’s how the resort got its name. 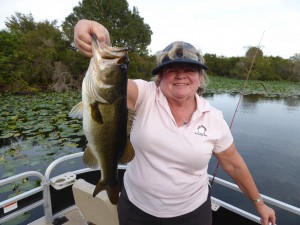 CATCH OF THE DAY