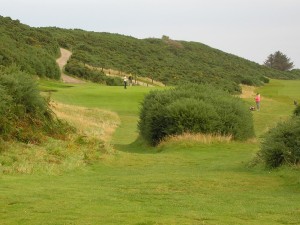 A spirited romp through Scotland’s Links and Whisky Trails

A sign in the Glasgow Airport proclaims that Scotland is the best small country in the world. Aye, especially if your idea of heaven is hitting true seaside links by day and enjoying a wee dram and genuine Scottish hospitality in a snug pub or castle by night.

In fact, it was over a few amber elixirs with my friend Margaret that the idea for our Highland fling was born. I should explain that Margaret, an expert on all things distilled and fermented, makes her living writing and opining on wine and spirits. She was keen to do Scotland’s fabled Malt Whisky Trail. I’m a self-confessed golf fantatic. Ever since reading “A Season in Dornoch” by Canadian golf journalist Lorne Rubenstein, I’d been salivating to play Royal Dornoch and neighbouring Highlands links.

So we thirsty travellers began our jaunt last fall, witnessing all four seasons as we drove north from Glasgow, past Inverness, over the Firth of Moray. We arrived at the Royal Burgh of Dornoch late afternoon when the sun shone a welcoming glow on the neatly kept cottages and shops Across from the imposing 13th century Cathedral (where Madonna had her son, Rocco, christened) we entered the quaint reception area that doubles as a pub at the Dornoch Castle Hotel. King of the Castle, Charlie the tabby cat, reluctantly left his usual spot near the fireplace to give us a sniff. 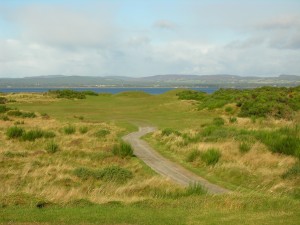 After settling into my Cathedral View room that held the distinction of housing its toilet in the castle’s 15th century turret, I joined Margaret in the pub where we began our single malt education and barmaid regaled us with tales of the castle’s friendly ghost.

Fortunately there were no bumps in the night. In the morning, after a hearty feed of porridge and kippers, we headed up the hill to Royal Dornoch, said to be the third oldest golf course in Scotland. After reading Rubenstein’s glowing accounts Dornoch and noting that Golf Magazine ranked it 15th in the world, I had high expectations.

The Nature of the Beast

Usually such lofty hopes meet with disappointment, but not on this masterpiece conceived by Old Tom Morris. If ever a golf course felt like the ultimate natural collaboration with Mother Nature, this was it. From the elevated third tee a majestic vista unfolds of seemingly limitless sea, dunes and linksland. The lull of the North Sea and the choir of the shorebirds give one a sense of calm. By the time we hit the eighth hole we were almost on the beach and in golf nirvana. If I’d spotted a little old Scot in a red coat hitting a feathery it wouldn’t have surprised me.

After our round we took a wander through the tidy town. A cheery gent led us to No. 3 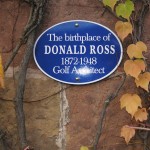 St. Gilbert Street where a historical plaque marks the birthplace of Donald Ross, acknowledged as the father of American golf course design. Before setting out for the U.S., Ross was Dornoch’s club professional and greenskeeper. No doubt Dornoch’s crown greens were his inspiration for Pinehurst No. 2. 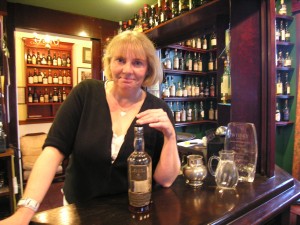 With typical Highland hospitality our guide pointed out his cottage and invited us to “knock on the door anytime. There’s always something in the bottle.” But Margaret had reserved a tour at the nearby Glenmorangie Distillery, where I gleaned the basics about whisky making. The tour ended with a taste of  the company’s ten-year-old malt, The Original, in which Margaret detected a nose of luscious fruit and vanilla. I learned that adding just a wee nip of water opens up and enhances the flavour of the whisky.

We spent another ghostless night at the Castle before heading out to Tain, an Old Tom Morris layout dating back to 1890, about ten miles south. Most memorable was number 11, the Alps. From elevated tees you have a blind shot over two huge mounds resembling breasts with a deep bunker in the middle acting as cleavage. The green, when you finally reach it, totters over the beach.

765 Bottles of Malt on the Wall

We didn’t dally too long in medieval Tain as Margaret was on a mission to get to the Quaich Bar at the Craigellachie Hotel in Speyside in plenty of time to sample some of the 765 single malts arranged in alphabetical order on shelves around its snug walls. Prices for a dram (25 ml) range from £2.35 for a ten-year-old Aberlour to £275 for a rare Black Bowmore that is no longer made. For a Scotch aficionado, The Quaich is amber heaven.

Somewhat groggy, we headed out the next morning for Nairn Golf Club and teamed up with Philip, a member, who demonstrated that it’s possible to slice onto the beach six times in the first seven holes and still salvage a couple of pars. Originally laid out in 1887, the Championship Course has a first-rate pedigree: Archie Simpson, Old Tom Morris and James Braid all did some tinkering here.

If you’re going to walk off a hangover, Nairn is just the place with the sparkling waters of the Moray Firth always in sight, the dappling effect of sunlight on the Black Isle and the distant peaks of Strath Conan. The fifth hole, selected for inclusion in The 500 World’s Greatest Golf Holes, typifies the challenge: you must wallop your drive over the edge of the beach to avoid a Braid bunker on the left side of the fairway, then land your ball on a slick green perched on a plateau. Did I mention the gale-force wind?

A gallon of tea and some restorative fish and chips in the airy clubhouse fortified us for our search for Minmore House on the Glenlivet estate in Cairngorms National Park. This is the mythic heart of the Highlands with its majestic landscape of foreboding mountains carved by deep glacial valleys. It’s moody country: one minute the sun is flickering on hues of heather and tweed; the next minute the sky turns dark and somber. 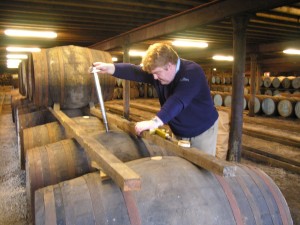 Located a mere sand wedge from the Distillery, Minmore House was the family home of Glenlivet founder George Smith. Today, Lynne and Victor Janssen are the hosts—he’s the chef and she runs the show. A peat fire burned in  the panelled living room where Jack Russell terriers Bella and Jock were curled up on the velvet sofa. Our room amenities included miniature bottles of Glenlivet to tide us over until dinner—a candlelit affair consisting of a terrine of wild game, prawn bisque, Aberdeen Angus filet topped with wild mushrooms and a Grand Marnier soufflé. Joining fellow guests for a nightcap, we learned that back in the 1824 when the Speyside area was full of illicit stills, George Smith was the first distiller to go legal—a brave move in a wild land full of hooch-making renegades. When the talk turned to Minmore’s ghost, rumoured to appear in the form of a Highland calf, we decided to call it a night.

The Sean Connery of Single Malts

Speyside is arguably the finest whisky-producing region in the world, so on Margaret’s suggestion we gave our golf muscles a rest and devoted ourselves to a day of malt immersion. On The Glenlivet tour, our guide informed us that Dean Martin, Frank Sinatra and Charles Dickens were all partial to their brand. After viewing the various interactive displays and stills, we were invited to a tasting culminating in a 25-year-old vintage.

“It’s the Sean Connery of whiskies,” our guide remarked while swirling the nectar in his glass, “mature, sexy, rich and debonair.”

We carried on to Glenfiddich near Dufftown, owned by William Grant and Sons and boasting the largest whisky output in the world. Their Connoisseurs’ Tour includes a tutored nosing and tasting of single malts ranging from 12 to 21 years in age. In the gift shop I picked up some mincemeat tarts and a 15-year-old vintage with my own personalized label. There were at least six more potential tours and tipples but I convinced my pal that we should save some for our next trip.

We headed back to Minmore House for Lynne’s lavish afternoon tea and a hike on one of the Smugglers’ Trails in order to justify another stellar dinner.

I’m not going to say we saved the best for the last, because I’ve been smitten by more than a handful of Scottish links, but Cruden Bay, just north of Aberdeen, certainly provided a grand finale. From the height of the parking lot we looked out over one of the most awe-inspiring stretches on linksland ever dedicated to the game. Against a backdrop of North Sea whitecaps the dunes rise up to 60 feet, their shaggy slopes covered in golden fescue. Beyond the first fairway the ruins of the sixteenth-century Slains Castle dot the beach. We’ll never forget the intriguing eighth, ninth and tenth fairways. Massive bowl-shaped dunes frame the green on eight, creating an optical illusion that the pin is closer than it is. 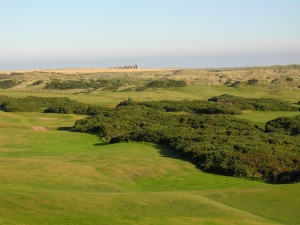 At the top of what I have christened heart-attack hill the ninth requires a blind tee shot over a slope between two large bunkers. From the higher tenth tee the panorama is breathtaking, with sea and farmland stretching into the horizon and the fairway beneath your feet. A winding burn, crossed by two bridges, protects the green. As James Finegan writes in his tome, Where Golf is Great, “this is links golf to dote on.”