The two golf courses at the 36-hole Streamsong resort are very, very good. The layouts opened to acclaim in 2012 and both deservedly made the 2013 Golfweek America’s Best Top 100 Modern list. (I’m a Golfweek rater.)

The courses weren’t open long enough to qualify for the Golf Digest list.

I played both Streamsong courses, located just south of Fort Meade, Fla. in late February with with  E.J. Altobello, the Director of Golf at Tekoa Country Club in Westfield, Mass.

We very much liked both courses but think there is too much strategy for the average player, the person who will most likely only play the resort’s two layouts once.

That being said, we both could play either course on a regular basis and never get bored.

I favored Coore and Crenshaw design over the Tom Doak layout, E.J. ranked them as even and we both think that the front nine of C&C course is far and away the best nine on the property.

The eight par-3s over both layouts are fantastic. E.J. went so far as to say if he could play only one hole for the rest of his life, it just might be the sixth on C&C’s design. From the front tee to a front hole location, it plays about 85 yards. From the back tee to a back flag, the distance is over 200 yards.

On our day at Streamsong took 11 hours to complete both golf courses thanks to a pair of downpours and one tornado warning. E.J. carded a 81-76 I was 89-81 playing about 6,584 on the Red (C&C)  and 6,698 on the Blue (Doak). Scoring well was not our goal. Absorbing as much design intent as we could from each course was. 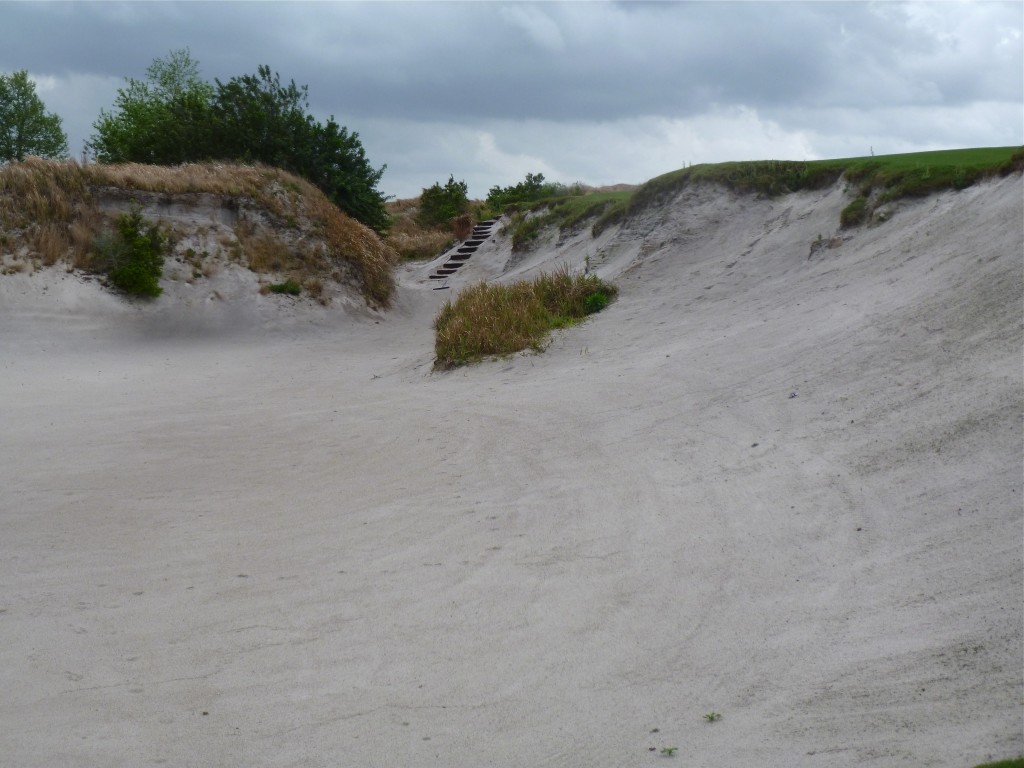 We tried alternate routes off tees to see what the angles into greens looked like, rolled putts to multiple imaginary hole locations and had our caddy “Tuna” relate stories on how players he has worked with fared on certain holes.

The day started just before 10 a.m. on the Red (C&C) under bright skies with a sustained 20 mph wind and culminated on the Blue 18th in dead calm conditions as the sun set.

With all that we loved about the courses, we both thought they would be better enjoyed as a private club rather than an expensive public facility.

For the vacationing golfer looking for a Tom Fazio design where everything is out in front of you or a Rees Jones course where there are no preferred sides to play into greens from the wide fairways, the two Streamsong 18s will prove to be perplexing and probably frustrating. The one-time players, especially those whose handicaps are in the 20 range, will find themselves irked when what they think is an acceptable shot ends up in awful locations. Even with a caddy showing how to play the hole correctly, there will still be instances where a shot appears to end in a reasonable result only to find out it has not.

On many drives and approaches throughout the 36 holes there are correct places to play to and from. Sometimes, comprehending the hole is not apparent from the tee, which is okay if it’s a layout a golfer plays often. There is nothing wrong with having to learning how to conquer a golf hole, but for most people that takes more than a round or two.

Here’s an example from each 18. 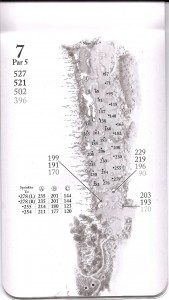 With a tailwind, a well-struck shot and a firm golf course, it is very possible to reach the green in two. The putting surface is 60 yards deep. Wedged up against the left front corner is a bunker. The entire left side of the hole, that includes the green, is bordered by water. To the right of the green is a large area of fairway, the place it would seem to miss the green. The problem is this: guarding almost the entire right side of the front half of the green is a sand mound that is probably seven feet high. An approach shot that stops just to the right of the mound leaves the player with no option (because of the tight lie and water on the other side of the green) but to play the ball away from the flag—most likely with a putt—in essence, tacking their way around the knob.

I have not a problem with the sand feature, and while this is totally acceptable on a course with regular play, it seems extremely penal and demoralizing on a resort course.

Think of it this way, you crack a drive and a pure a three-wood and the ball stops some 20 feet right of the flagstick. Unfortunately, your next shot is to putt back up the fairway away from the mound, so the following shot can be a putt onto a green. Sound like fun?

After experiencing the hole once, savvy golfers will know not to make that mistake and might even realize that with a flag in the back half of the green, a shot 30 yards to the right of the putting surface leaves a wide open lane to the hole.

On the Blue (Doak) Course, the same scenarios can be found. 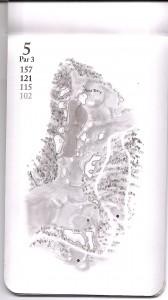 On the delightful downhill par-3 fifth that we played at 120 yards, the strategy is dictated by the location of the flag. The green is 74 yards deep angled left to right from the tee but extremely narrow. Shots that roll off the back end up in bunkers that are well below the putting surface, or worse find their way into long thick native grass.

After holing out to a front left location, we took the time to hit some shots to the back right flag location, set in a hollow just beyond a bunker. It was after a number of efforts that we realized that depending on wind and firmness of the greens, the best play appeared to be to miss the green to right and putt back up to the hole. Again, wonderfully strategy for an every-day facility, but for a resort how many golfers will deduce the tactic from the tee?

If there was a consistent negative from throughout our enjoyable day, it was the sand that is the same in the bunkers and the vast waste areas, found naturally on the site.

According to the scorecards all sand is considered a hazard.

We plugged balls on shots hit by everything from drivers to lob wedges. Because of the sand’s makeup, deep footprints are found everywhere.

In the greenside bunkers the problem can be remedied with a rake, but in the waste areas, where no rakes are 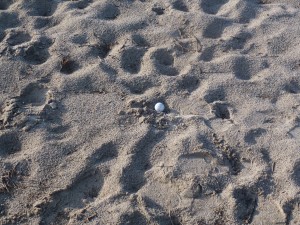 found, it is impossible to alleviate the problem. Even golf balls that trickled into sand turned into headaches, ending up with globs of sand adhered to them, big enough to significantly affect ball flight on the the next shot.

It rained throughout the day we played and that might have lead to the issues, but the course was not soaked by any means. Shots on the fairways had plenty of bounce and roll and shots into the greens didn’t plug.

I talked with two friends who played Streamsong on a dry day and they said the sand was not an issue.

Even with the sand predicament, though, Streamsong’s two golf courses are fantastic and stand as two of the best public layouts in Florida. I see them being too much for the one-time players, but would gladly call either the Coore and Crenshaw or Doak design as my home course and hope I have a chance to play them again.