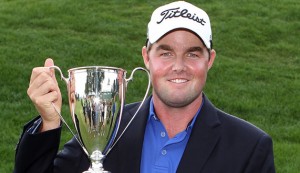 Bubba Watson, Hunter Mahan, Keegan Bradley and defending champion Marc Leishman (pictured) say they are playing this year, according to the tournament.

Mahan was the 2007 Travelers champion.

Bradley, the 2011 PGA Championship winner and 2011 PGA Tour Rookie of the Year, is local favorite haling from Vermont.

Tickets also go on sale today, and with the tournament only 97 days away, the Travelers Championship is offering a special ticket package for $97 that includes four Any One Day tickets, one Lot B Parking Pass and $30 in food and beverage vouchers, a savings of $99.