Recently, New York-based golf writer Ann Ligouri wrote a review of the two golf courses at The Breakers in Palm Beach, Florida for the New York CBS television affiliate. She used adjectives that are common among writers and broadcasters but in reality have absolutely no meaning. She described the greens of the The Ocean Course as “small” and the bunkers of the Breakers Rees Jones Course as quite “deep.” She gave no concrete numbers as to what “small” or “deep” entail. 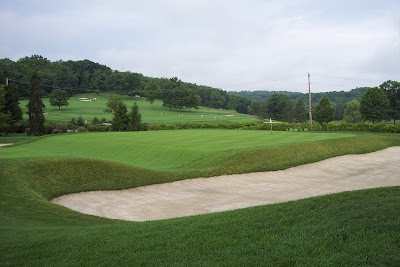 According to the Breakers web site, the Ocean Course was designed in 1896 by Alex Findlay (incorrectly spelled as Findley on the site) and renovated by Brian Silva in 2000. I’m assuming Rees Jones designed the Rees Jones course but I didn’t check.

Here are the results

Large green: The smallest answer to this question was 5,000-square feet, the largest 7,500-square feet. The most common answer was 6,500 square feet according to five people who replied

One architect’s reply to the green size query was, in part, “There are a lot of ‘conditions’, or ‘depends’ with the answers to these questions. As for greens, what is small depends on the slope in the green (what is pinnable), what club you’re hitting to the green, how firm the greens and approaches might play (how small will the green ‘play’). They can be too small for maintenance or playability or reasonable strategy. In the interest of good design, it is really not purposeful to assign numerical values to what is big or small. It depends – that should be the answer.”

One other architect said the size of a green has much to do with surrounding land. If, for instance, a green is built at the level of the fairway, and both areas are maintained firm, then the size of the actual putting surface is almost irrelevant.

In an interesting side note, he said he is amazed at how often those who have supposed intimate knowledge of a golf course have incorrect perceptions of green sizes. As an example, he recounted how he was brought in to expand a green that the superintendent said was 2,500-square feet. When it was measured, it was nearly double that size.

Depth of a deep bunker: The most common answer was six feet by four repliers. Two answered deep enough so the player cannot see out of them. An interesting perspective since that means a deep bunker to Dirk Nowitzky is a little different than for Justin Timberlake.

One reply was four feet for a fairway bunker and six feet for greenside.

It was nearly unanimous that Raynor’s bunkers are considered deep.

To put Ligouri’s original article into perspective, the greens at the Ocean Course average at least 5,000-square feet, which is medium size in the minds of all but one who responded

While Jones may have designed a few bunkers with a depth of five feet, there are no six-foot deep bunkers at the Rees Jones Course. However, I’m not sure of Ligouri’s height, so they might all be deep to her.