A universal question asked of those who cover professional sports is, “What is ____ really like?”

There is a truth that I learned a long time ago, your favorite athlete is probably arrogant, condescending, rude and churlish. Often they are cheap. Many have had their butts kissed since they were in junior high school, never worked a real job and have an ingrained sense of entitlement. For many, these traits hide massive insecurities. 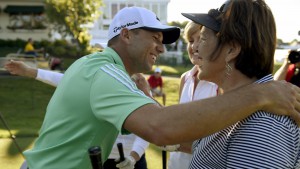 I say this after being an NHL beat writer for the better part of seven years, covering over 30 professional golf tournaments including more than 20 of what is now known as the Travelers Championship and the odd NFL, NBA and MLB game.

If you are a fan of certain athlete then be just that, a fan; don’t l
ook behind the curtain.

Two weeks ago I was given the opportunity to caddy in the Travelers Championship Celebrity Pro-Am. We would have no celebrity but Sergio Garcia would be our pro.

All I knew of Garcia coming into the day was what I had read or seen on TV. I’ve always liked him and the fact he has a personality different from so many of the clones to he PGA Tour. I think any athlete exuding emotion on the playing field is a good trait.

After spending almost five hours in his presence, I can tell you for that time span he was a genuinely warm and friendly person. After the initial introductions, he remembered the first names of the three amateur players in our group, all women

During the round, he read every putt of theirs on every green. In one instance the player rolled her putt exactly on the line Garcia plotted but at the last moment the ball dipped away from the cup just wide. A look of surprise came to his face and he freely admitted he didn’t see that break. He then dropped a ball and putted on what turned out to be the correct line.

Garcia interacted with fans, the players and the caddies throughout the day. At no time did I get the feeling he was faking it. He came across as genuine and honest.

Here are my two favorite examples of how Garcia was during the round.

While the ams hitting from the  women’s tee on the 14th hole at TPC River Highlands, I realized everyone was accounted for except Garcia. I turned around and found him to be 50 yards behind us on a back tee. He had brought a boy under the ropes. The two had their arms around each other and Garcia was snapping a selfie with the kid’s camera. This was not for the benefit of the crowd. Our gallery on the far part of the layout that time of the morning was maybe 10 fans and 12 tournament volunteers.

The second instance came a hole later on the short par-4 15th. Garcia teed off first and his shot ended up to the right of the putting surface. One of the ams, the best player of the group, was having a tough day. She had never played in front of a gallery and her nerves had the better part her until the 15th. There she nailed a drive down the middle. Her approach shot was going to be great the second it left her club. It was her best swing of the day. The ball landed short of the flag and broke left, just missing the hole and coming to rest about 6 feet past the cup.  Her effort was greeted with enthusiastic applause. She was left with  a downhill slider for birdie, net eagle in front of the most fans we had seen that day, I’m guessing about 75.

When it came time for the birdie bid, Garcia read the putt and then had some quiet words for her before stepping away. She just missed the putt but tapped in for par, net birdie.

She recounted what Garcia said to her.

“I was so nervous my hands (on the putter) were shaking,” she said with a big smile. “He came over and rubbed my back and told me not to be nervous. We had the line for the putt and to trust it. He said he knew I could make it.”

A few hours later when I bumped into her and another of the ams from our group, they were still talking about what a great day they had experienced and how the presence of Garcia had made it even more special.