The Gillette Ridge Golf Club, which was abandoned before the start of the 2015 golf season, appears to be on the way back.

For the past few weeks grass has been mowed and the irrigation system has been running. There is also a posting for the superintendent position. 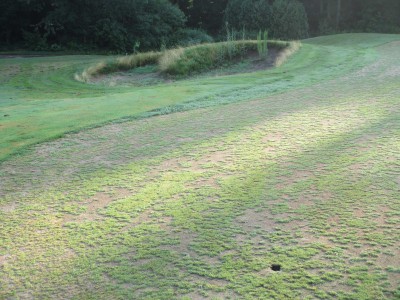 The reclamation of Gillette Ridge will not be an easy one. This is the 11th green photographed in July of this year.

The Arnold Palmer-designed course in Bloomfield, Conn. was built on the campus of Cigna and owned by the company before being sold. As I wrote in a previous post:

“According to a Sept. 1, 2014  story on HartfordBusiness.com, MDM Golf of Gillette Ridge, LLC, which owns the course, filed for Chapter 11 bankruptcy in August of 2014 . MDM is owned by former club professional and Connecticut resident Matt Menchetti.

“Cigna filed foreclosure against Menchetti’s Bloomfield course over its failure to make payments on a $4.5 million mortgage,” reads the story

“The property in question — the Gillette Ridge Golf Course — is on Cigna’s Bloomfield campus. The insurer sold Menchetti’s business the property and financed the deal. When it filed for foreclosure, Cigna said Menchetti’s company still owed $3.9 million on the loan.”

According to sources familiar with the situation, Cigna will regain ownership of the golf course and property.

MDM sister entities managed the two municipal golf courses in Hartford and the one in East Hartford before having the contracts cancelled.