Keney Park Golf Course, owned by the City of Hartford, Conn., will undergo a significant restoration this year, the first in it’s 85-plus-year history As a result, the course will be closed for all of 2014.

A portion of Keney is located in Hartford, with the rest inside the border of the town of Windsor.

The par-3 sixth at Keney Park, a version of a Redan hole with a quirky row of mounds that extends from the approach to beyond the back of the putting surface.

The front nine of Keney was designed by Devereux Emmet and opened in 1927. Emmet also designed the nearby Country Club of Farmington and renovated Hartford Golf Club. The back nine opened in 1930 and was laid out by Robert “Jack” Ross, an engineer for Hartford. Ross designed or redesigned about a dozen courses in and around Hartford. Ross renovated Goodwin Park Golf Course, also owned by Hartford and located in the city’s South End.

Matthew Dusenberry, a Milwaukee-based golf course architect was selected out of approximately a dozen applicants for the job. Dusenberry was a longtime associate at Greg Norman Golf Course Design. For the Keney project, Dusenberry has brought Tad Burnett on board, who he worked with at Greg Norman.

Dusenberry said he found Keney “delightful,” when he first walked it. “I was surprised at the piece of property and how basically intact it’s (the course) has stayed,” he said.

Other than the addition of the second nine, little else has been done to the Keney layout in the ensuing 84-plus years. The second green was moved back 50 yards and greenside bunkers added. In the 1970s, the architecture firm of Geoffrey Cornish and Bill Robinson moved the green to make the 10th into the only par-5 on the back nine. As a result, the par-4 11th became a par-3. Bunkers were also added on the  7-9 and 18th holes. 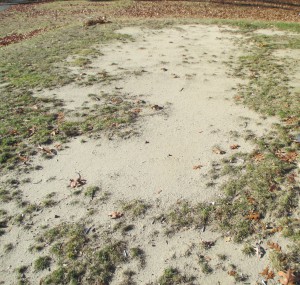 The second tee at Keney park with almost all the turf dead or gone.

Keney is approximately 6,000 yards long and one goal of the city is to add length. Dusenberry said he will only do so where appropriate. He thinks the landlocked layout can be stretched to 6,300 yards. He also plans to add bunkers that work with the design.

“It will be plenty of golf for 90 percent of the players,” Dusenberry said.

He said he also plans on reconstructing greens but he has no yet sat down with the city to determine exactly what is the goal of the project.

Hartford has set aside $10 million for improvements to Keney and Goodwin Park, including clubhouses, maintenance facilities and cart barns in addition to the layouts. Tom Baptist, superintendent for Hartford’s department of public works said there is no stipulation of how much must be  spent on each course. According to Baptist, Goodwin will be assessed this year with the needed work intended to be done in 2015.

At the end of 2013, Keney and Goodwin were in awful condition. An internal city audit laid blame on MDM Golf Enterprises, which managed the courses, and the city for lack of oversight. The city has terminated its contract with MDM, a Connecticut-based company that has also run afoul of the town of East Hartford for the management of its golf course.

Baptist said Hartford has not determined how it will manage Keney and Goodwin.

No construction or irrigation company has been selected for the Keney project and the permitting process had not begun. Baptist said hopes work on the course can begin by April.