This piece originally appeared on the Golf Course Architecture magazine website on Oct. 6, 2010.

One of the most difficult assignments for a golf architect is to be charged with building a resort layout that also has a membership component.

The father-and-son design team of Pete and PB Dye, though, has successfully accomplished this task with the Old Quarry Golf

Course at the Santa Barbara Plantation resort on the Caribbean island of Curaçao. 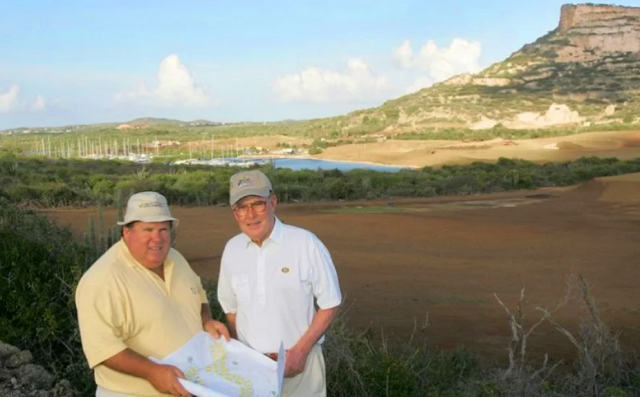 Santa Barbara Plantation is a 1,500-acre resort and residential community on the southeastern side of the island that borders the Caribbean Sea and includes a deepwater inland bay known as Spanish Water.  The Hyatt Regency Curaçao Golf Resort, Spa and Marina anchors the property.

In creating a layout for a facility where golf is but one of the many activities, as opposed to a golf destination, architects often take the strategy component down a notch, so as not to overwhelm the guest player. The theory is you can’t expect a golfer to unravel the designer’s puzzle if they are only going to tee it up once or twice during their stay.

The other side of the equation for the Dyes at Old Quarry was that, with a housing component to the development, and no other passable, never mind good, golf course on the island of 200,000 people, Old Quarry will get its fair share of repeat play. That clientele has to be challenged by something more than mundane golf holes ending at placid greens.

That’s not to say that the frequent player won’t have a better understanding of the golf course, just that the occasional golfer won’t feel overwhelmed at what lies before him or her.

At Old Quarry, the Dyes tamed their style – which can be, at times, extreme, with hundreds of bunkers, severe mounding and wild greens – but still produced a challenging layout, surrounded by gorgeous scenery with to a plethora of stunning views, while retaining their trademark strategy throughout.

They appropriately introduce themselves with a first hole, bordering the shimmering blue Caribbean Sea. It’s a par four,  playing between 225-394 yards (the course has five sets of teeing grounds). The green is angled so that the bold player who sends the tee ball down the right (ocean) side has the best angle on the second shot. The fairway, however, is plenty wide and those who shy away from trouble will still find themselves in short grass but needing to carry a small bunker some 20 yards short of a green, which has movement but is not overdone.

This pattern of strategic, spacious holes continues throughout the course, except for one notable exception.

The fifteenth plays from 466 yards to 360 yards and here the Dyes revert to their old and familiar way. A downhill tee shot leaves a severe uphill approach of 40 feet to a plateau green that demands a precise play in order to hold the putting surface. Errant attempts to all but the left side will tumble dozens of yards back down the slopes leaving a testing pitch. Once on the putting surface, the challenge is not over thanks to the two-tiered wildly-undulating green that will have fans of architects of the likes of Herbert Strong, Perry Maxwell and, of course, the Dyes, cackling with delight.

“It was designed to be one of the most talked about,” said longtime Dye course shaper Jim Bolinger through a wry smile. Bolinger stayed on after shaping and growing in the course to take the role as golf manager.

What will also appeal to members and guests alike is the backdrop to Old Quarry. The first two holes have the ocean on the right. The routing then turns inland for a tropical parkland feel of tree-lined corridors. From there it is the bay known as Spanish Water that comes into view with the white-walled, orange-roofed homes dotting the hillside that encompasses it as various sizes and shapes of boats bob in the harbour. Here, holes six, seven and eight bring players nearly to the water’s edge via a short par four (Driver or layup?), short par three (Go for the sucker pin or play safe?) and a dastardly deceiving par five (How much can I bite off on the drive and second shot?) before the routing turns again, this time for holes nine to seventeen and an entirely different, yet just as beautiful vista. You might suddenly be in Scottsdale, with the routing plays to, along and away from Tafelberg, or Table Mountain, a rock pillar that juts 218 meters feet straight up looming over the holes and was once quarried, giving the course its moniker.

For the culmination, the Dyes end in style with a downhill par four stretching from 353-425 yards that presents golfers with a final magnificent panorama of Spanish Water.

Curaçao became an autonomous country within the Kingdom of the Netherlands on 10 October, and has plans to enhance its appeal to US and Canadian travellers; other major hotel operators are expected to follow Hyatt onto the island.

Golfers stay at the Hyatt hotel that has 350 rooms as well as a handful of private bungalows that come complete with 24-hour butler service and a daily in-room massage. There are also three, restaurants, three pools, a beach gym and the opportunity to snorkel and dive as well as hiking trails and, of course, one very fine golf course.