It was regarded as a very good golf course almost immediately, and hosted in 1941 the Providence Open as part of what was the precursor to the PGA Tour. Gene Sarazen, Ben Hogan and Sammy Snead, as he was referred to in the Associated Press story, all competed. The tournament still is played at Triggs, a Donald Ross design, but the touring pros only stopped in that one time. 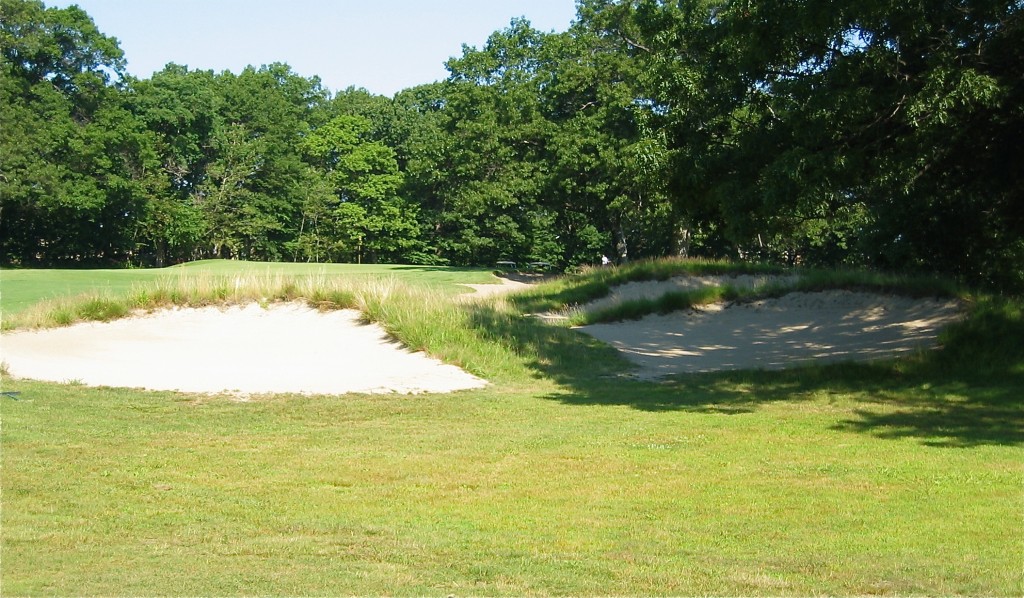 Wedged into a neighborhood, Triggs is a golf course that should be played. In fact, for anyone driving the coast between Providence and Groton, Conn., Triggs and Shennecossett Golf Course, another Ross layout, would make quite the doubleheader. Triggs has the hallmarks you find in any well-designed golf course: challenge, variety, enjoyment and options. When I played it in the late summer of 2011, the course was in fantastic condition. The prices fall into the very reasonable category. A round of 18, plus cart and lunch, is $52.

A number of individual Ross hole drawings hang on the restaurant wall attest to that fact that Triggs is a genuine Ross. (One employee told me that some of the originals have been stolen over the years. I hope those are copies within the frames.)

Triggs does not, however, to me, have the feel of a Donald Ross course and I attribute that to a pair of factors.

First, the bunker design is of a style I’ve never seen on a Ross layout in person, in pictures or in drawings. They are large and rise up from the land on many occasions and are clustered, at times, in a way that surprised me.

Second, the course opens with a succession of four very difficult holes, another attribute I don’t ascribe to Ross. There are, for sure, Ross designs where the opening hole or two are difficult,  nothing I know of exceeds the first four at Triggs. They play (from the white tees) at 390 yards, 411 yards, 445. Those par-4s come to an end with a gently rising par-3 of 184 yards where the flagstick is visible but the green surface is not. It plays at least a club longer in benign conditions. We encountered a breeze into us making it a 200-yard shot.

This is not to say there is a definitive Ross style. Anyone who promulgates that idea has not understanding of Ross. The same for anyone who propagates the theory that Ross regularly built small, domed greens. Ross cannot be pigeon-holed and Triggs might just be an adventurous foray on his part. 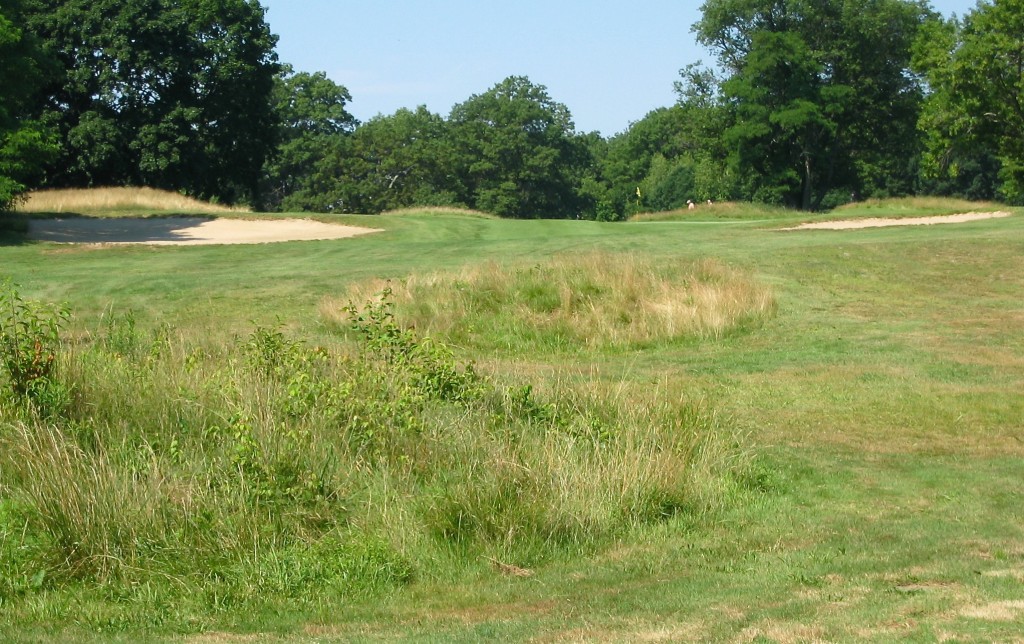 If Ross, though, is not largely responsible for the tone of the course then there are only a few who might be. Speculation is that one of his chief associates, Walter Hatch, oversaw the construction. If he did, it was with Ross’s blessings. While Ross did not produce the final drawings for a course—his associates did, including Hatch—he sure signed off on them.

There are plenty of elements throughout Triggs that are found in nearly all Ross layouts. The greens are interesting and vary in size. Some lay comfortably on the terrain while others rise up gently from the front and fall down sharply off the back and sides.

There is an abundance of strategy with par-5s, some that can be reached with two crack shots by longer hitters, as well as diabolical short par-4s that tempt the longer hitters to pull driver but also challenge those who choose to lay up.

While steps have been taken in recent years to restore Triggs, the layout still needs many more trees removed to reveal Ross strategy and aesthetics that remain hidden.

It is obvious from the second hole, though, that there is something different about this Ross course. (See the first photo above.) Just into the right rough some 60 yards short of the green is a cluster of bunkers, appearing much they way they do on the drawing, which also contains precise instructions on how to build them.

“Irregular mound with foundation formed of rock and to vary in height from 3 to 5 ft. Rock to be covered with clay and top soil. Form the foundation so as to leave three sand pockets. ‘A’ is the highest point on the foundation.” 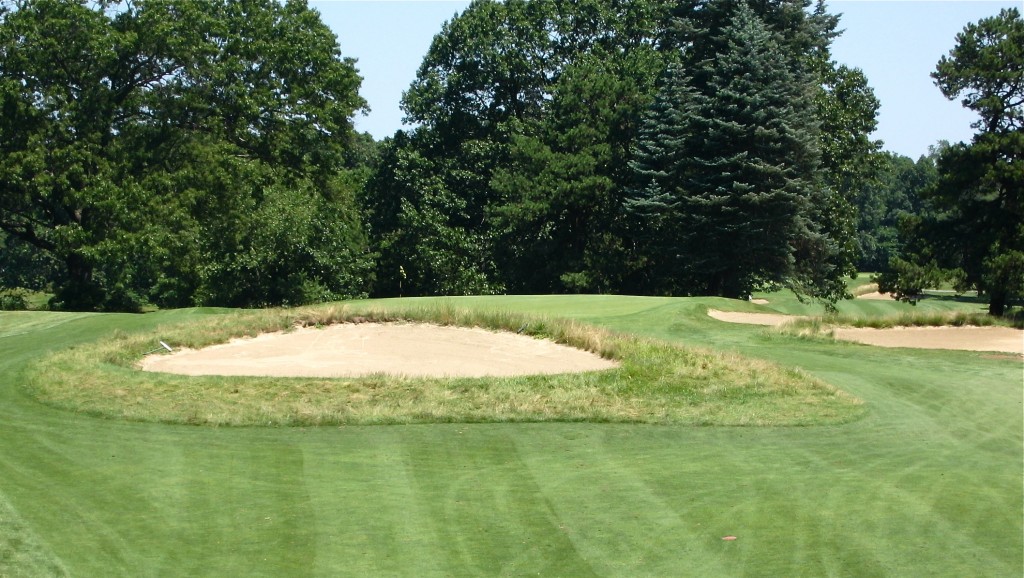 The fairway bunker on the 10th hole.

Were one to start Triggs on the back nine, it would be soon obvious, as well, that this was no ordinary Ross design. About 60 yards short of the green, on the left center of the fairway on the 502-yard-hole is a massive bunker. It sits on top of the terrain,  not down into the ground as would be expected of Ross. Play away from the hazard, and a bunker in the right rough short of the green comes into play.

The strategy is Ross; the aesthetics are not. 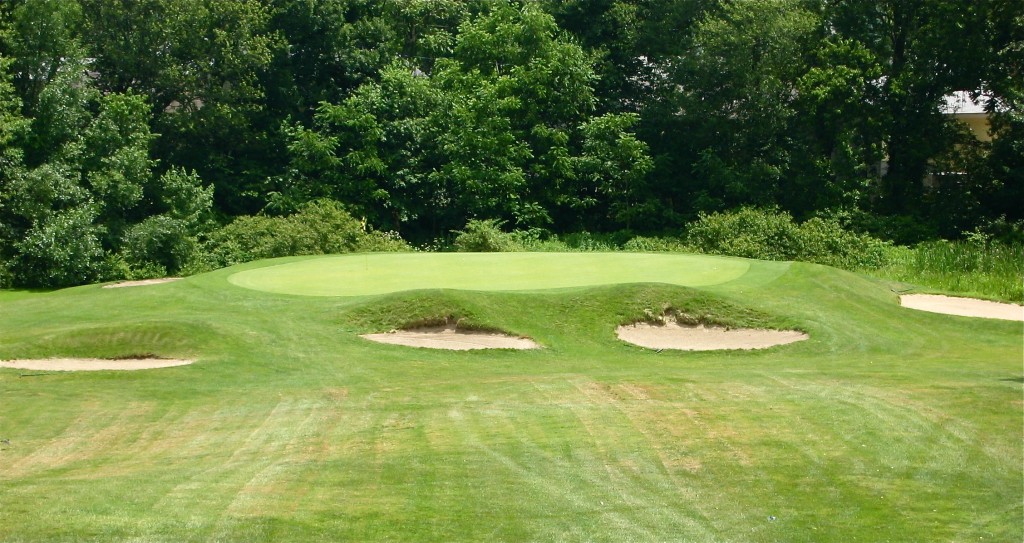 Three holes later is one of my favorites on the course, a par-5 of 447 yards. A large bunker on the inside of the dogleg left tempts all, but only the longest of players can carry it. The hole then bends back to the right and a slope to the right of the green allows for the ground game to be utilized. Here, though, trees detract from the hole. Two bunkers in the right rough, one about 40 yards short of the putting surface and one greenside, are meant to tie in visually to the carry bunker. They do not. Tree removal would bring those sand hazards into view on the 10th hole, as well.

The 14th plays downhill at 155 yards but reminds me more of a Devereux Emmet par-3 than a Ross.  The putting surface is wider than it is deep and the bunkers lay at the base of the fill pad and are not gouged out of it. From the tee it appears to be a tiny target and the shot is made all the more difficult by that fact that a hazard line is just beyond the green complex.

The 15th has the most uncomfortable tee shot on the course. It appears the teeing ground was moved back and to the right, wedged into a corner. The carry to the fairway is a healthy poke and the feel is claustrophobic as a result of the trees on both sides

Fittingly, Triggs ends with two big par-4s, bringing symmetry to the enjoyable and testing round.