Of all the nerve-wracking golf shots I have had to play in my life, from the opening hole of the Old Course in St. Andrews, to delicate pitch shots during a crucial moment of my men’s club tournaments at the nearby muni, hitting a shot with PGA Tour pro watching ranks near the very top of the list.

The 15th hole at the Mayakoba resort's El Camaleon course.

For me, having a guy who makes his living with a golf club watch me swing is akin to having an IRS agent stare over my shoulder while I fill out my taxes—I’m most likely going to make a mistake.

This past March, another TheAPosition golf writer, Bob Cullen and I had a chance to tee it up four times with PGA Tour pros. (You can check out Bob’s website by clicking here.) The opportunity came as part of a sponsors outing the day after the 2012 PGA Tour’s Mayakoba Golf Classic held on the El Camaleon course. The layout is located just outside of Cancun, Mexico at the Mayakoba resort. The flags were in the Sunday hole locations but we played a course that was about 900 yards shorter than the length the pros encountered.

The day was made all the more interesting by the fact that at each one of the four par-3s, we would play the hole with a PGA Tour pro. If your tee ball was closer than his, a prize was yours.

Prior to the round, we all received a short game lesson from John Cook and Fred Funk and a hitting lesson from David Duval and Esteban Toledo, the guys we would see during the round

Now, I’ve hit shots in front of a pro probably a dozen times as part of the media day for the Travelers Championship, the PGA Tour event in Cromwell, Conn. My self worth or assessment of my golf game isn’t based on the one shot I hit in front of some of the world’s best golfers, but gosh darn it I want to do well, real well, every time I have the opportunity. Over the years, I’ve had good efforts but never uncorked an A+ that made the pro say, “great shot!” 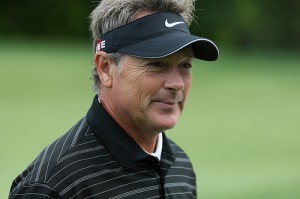 One of the keys, I’ve found, to playing well in front of pro is to be warmed up prior to hitting, not just on the range, but on the golf course. So, I wasn’t thrilled at all to find out we were assigned to commence our day on the par-3 10th where John Cook awaited our arrival. For the round, Bob and I were paired with Enrique, who works for a Cancun golf travel company.

Bob and I had breakfast with Cook and Funk that morning and while I would have thought that would have made me a little calmer, it made me more nervous.

The 10th played about 140 yards to the back right pin. The object was to carry the downhill, downwind shot to the middle of the green and let the ridge guide the ball to the flag.

My strategy to hitting a good shot began even before it was my turn to play. I made sure to hover well back from the tee so there was no way I would have to go first. Enrique, with a very slick move, somehow convinced Bob to lead off. Bob turned in a wonderful effort that stopped on the back fringe, perhaps 15 feet past the flag.

Then it was Enrique’s turn. I was milling around over near the golf cart, well away from a distance where he could hoodwink me into going next. His effort was well left of the hole but on the putting surface.

Seeing those two successful bids helped me, or so I believed. I was nervous but not gasping for breath as I addressed the ball. Then I went through what, at the time, seemed like my normal swing thoughts: turn your shoulders, John Cook is watching, keep your head still, don’t over swing, aim for the middle of the green, did I pay my rent this month? John Cook is watching. 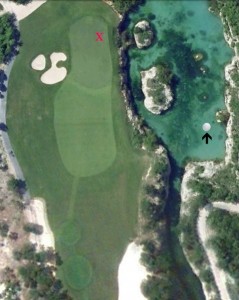 The black arrow and golf ball indicate where my shot on the 10th hole landed. The red arrow on the green was the location of the flag that day.

As a result of my laser-like focus, I made contact with the ball on a part of my club that is not designed to make contact with the ball. The little white sphere went hard right (I’m right handed), low and turning right as it flew, missing the green, the fringe, the rough and the rest of the golf course until it came to rest in a canal. (See accompanying image.) No waterfowl, fish, alligators, tourists or employees were injured as a result of my ineptness.

Neither my playing partners nor Cook uttered a sound. What could they say? “Oh too bad.” “Just missed that one.” I know they think they felt my pain. They did not. I suffered alone.

I expected some sort of positive comment from Cook but when I glanced his way he averted my eyes and appeared to slightly shake is head, but not in sympathy.

Cook’s effort was 25 feet left of the pin, the best of the group since Bob’s ball, which was closer, was just off the green.

I took a drop and pitched a wedge to 30 feet. My putt finished near the cup. Cook complimented me. The double bogey was conceded.

Before leaving, I told Cook he witnessed one of the most embarrassing moments in my golfing life. He gave me a nod. I think—I hope—I detected a modicum of empathy. Then he jumped in his cart and headed back to the tee to meet the next group.

I was determined to do better at the next par-3 and I did. At the uphill 15th, which played 135 yards and had beach, unsuspecting vacationers and ocean beyond, I thinned a three-quarter 6-iron to about 14 feet. I two-putted for par. Fred Funk stuck his effort inside of five feet.

I credit my success to the fact that I reduced my swing thoughts to just two. “Relax, you can’t screw up as bad as you did last time,” and “Don’t blade it into the Atlantic.” 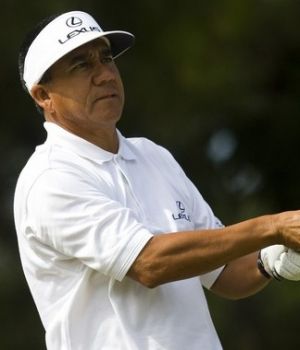 Esteban Toledo was waiting for us on the third par-3, hole no. 2. It was about 120 yards, slightly downhill with a slight helping wind. I put wedge in my hand and didn’t like the club selection. Being the seasoned golfer, rather than go back to my bag and change or at least step away from the ball and refocus, I went ahead and hit. The result was a wonderful yank-hook thing that came to rest on the green but 35 feet from the flag.

Toledo stuck his shot two feet, at the most, just right of the flag. I ran my putt five feet past but made the second effort for another par. Toledo rolled in the birdie putt from almost the exact same spot where he made birdie in Sunday’s final round.

Our last pro hole was the uphill seventh; again beach, tourists and ocean lay beyond. It was about 100 yards to the pin tucked on the back right of the green. The wind and David Duval were with us. He was once the no. 1 ranked professional golfer in the world. I remembered that as I addressed the ball.

Club selection was a gap wedge. I was going to have to hit hard to get it there but it seemed a better choice than trying lay way off a wedge.

The second the ball left the club all three of my gallery members gave verbal approval but while the shot was online, it was 25 feet short the result of contact that was not as solid as I desired.

Duval’s effort landed in the right bunker, short siding himself. His sand shot was “pick it up” distance from the hole when it stopped.

Duval was exiting the bunker as I pulled the putter back for my birdie effort and it was at that precise moment that my lone swing thought became, “Hey, that’s David Duval” and, as a result, I left the putt five feet short. On my par bid, I took it outside the left edge more than I would have liked and the ball slid by the hole.

“Good putt,” Duval said. “That was breaking right all week.”

That was darn nice of him to say that, I thought. We said our goodbyes and David headed back to the tee. Soon after the day was over. As with every other round I’ve ever played, none of the shots could be taken back. This time that included my debacle on 10.

No matter how hard I try I can’t forget that moment, that disaster. But as bad as I felt after such a poor performance in front John Cook, I’m looking forward to this year’s Traveler’s Championship media day and my chance to tee it up with defending champion Fredrik Jacobsen. I’m already working on my swing thoughts.