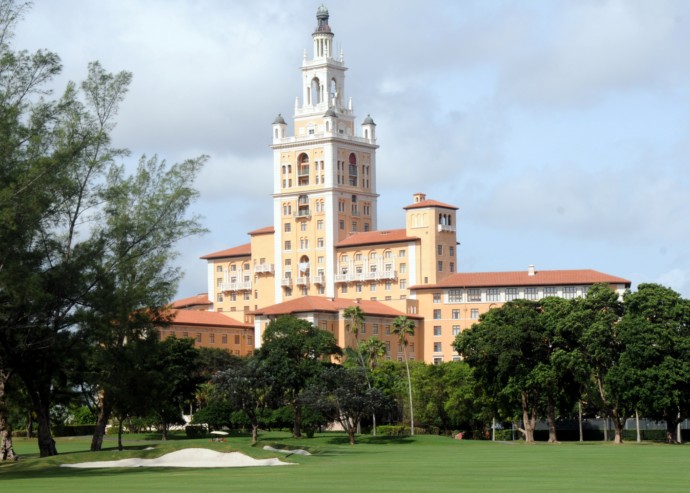 The 18th fairway at the Biltmore, approaching the hotel

It’s hard to imagine a Donald Ross resort course with a more checkered history than the Biltmore in Coral Gables, Florida. The course has been, at various times, a playground for the likes of Bobby Jones, Babe Ruth and Al Capone; the grounds of a military hospital; and a muni for Coral Gables, which is a few miles south of downtown Miami. Now, after a multi-million dollar restoration, it’s a hybrid: part resort track for an elegant old hotel and still, in part, a municipal course for the residents of Coral Gables.

I liked the course. It’s fun and playable. The fairway grass is a little scruffy in places, and it lacks the length to challenge today’s bombers. But my wife made six pars when we played, which pleased her. I three-putted about as often, suggesting that the greens aren’t easy. It’s a perfectly good course for average players taking a winter holiday.

How much it resembles the original Ross course is hard to say. The Eastern Seaboard is dotted with hotel courses from the 1920s and 1930s that advertise themselves as Ross originals. The iconic Scot may actually have worked on the sites. But he may only have looked at topo maps, sketched a layout, and sent it to the developers.
The truth may be lost to the mists of time.

Ibises hang out on the bridge to the 17th green

What’s all but certain is that in the ensuing decades, many a superintendent or hotel owner has decided that a particular bunker is too expensive to maintain, or that a particular hole needed to be re-routed to accommodate a housing development, or that a particular green was too hard to mow and should be shrunk. I’ve been in the locker rooms of resort courses that proudly display their original Ross hole plans on the wall. The reality is that the hole plans bear little resemblance to the course that’s on the ground now.

I could see some Ross touches in the layout of the Biltmore course. There is water in play on half a dozen holes. But with one exception, the holes are placed so that the water penalizes only two kinds of shots–the horrid one, like a ground ball off the tee, and the unsuccessful gamble, like a fairway wood that seeks to reach a par-five green in two and falls short. There are no long, forced carries. There’s only one hole, the 17th, on which the average player, hitting reasonably solid shots, might get wet. That was the way Ross, who was raised at Royal Dornoch in Scotland, thought water should be deployed on a golf course. On Scottish links courses of the 19th Century, water most often took the form of narrow little creeks, or burns. Golf balls were too precious to use on a course with ball-gobbling ponds and long, forced carries. If you rolled into a Scottish burn, you could most likely fish the ball out.  A golfer with a telescoping ball retriever can go fishing at the Biltmore, too.

The Biltmore green complexes have some touches that Ross employed, like false fronts and occasional turtle-shell contours that allow balls to trickle off into bunkers. But they’re not nearly as severe as the greens on some Ross masterpieces. Again, it’s hard to know what is Ross’s and what is the work of later renovators. 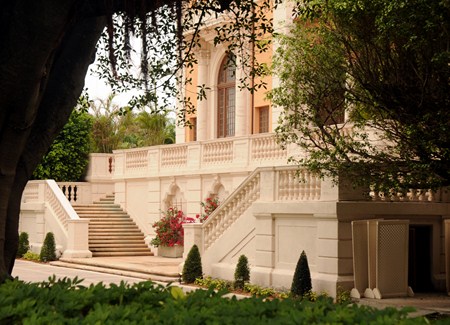 The most impressive architecture on the property may not be Donald Ross's.

The golf course began with a piece of flat, Florida ground adjacent to a grand hotel. The contours have been manufactured, probably by mule-drawn shapers in Ross’s day, more recently by bulldozers. When it was built, in 1925, it was surrounded by amenities like polo fields. Now, it’s surrounded  by a chain-link fence and the backyards of Coral Gables residences, some of which are quite elegant.

Then as now, the Biltmore Hotel dominates the course. It’s got a 20-story tower that can be seen from any hole. It was designed in the Mediterranean Revival style popularized in South Florida by Addison Mizner, though the Biltmore architects were the the less renowned Leonard Schultze and S. Fullerton Weaver. It’s got marvelous ballustrades and staircases. The hotel was in vogue during the Roaring Twenties. During the Depression, it survived by, among other means, employing Johnny Weismuller as its swimming director.  He gave exhibitions at the pool.

But in 1942, the government took over the hotel as a military hospital. It remained a hospital after the war, under the auspieces of the Veterans Administration. The VA left in 1968, and the building barely survived. It was empty for as much as ten years at a time. But in recent years it’s been beautifully restored and returned to its original function as a hotel. The city of Coral Gables retains title to the golf course, and it’s spent $3 million on its restoration.

I know that I am as likely to change this by ranting about it as King Canute was likely to reverse the rising tide. I still don’t like it. But the Biltmore course may be worth staying at the hotel and getting a golf package.