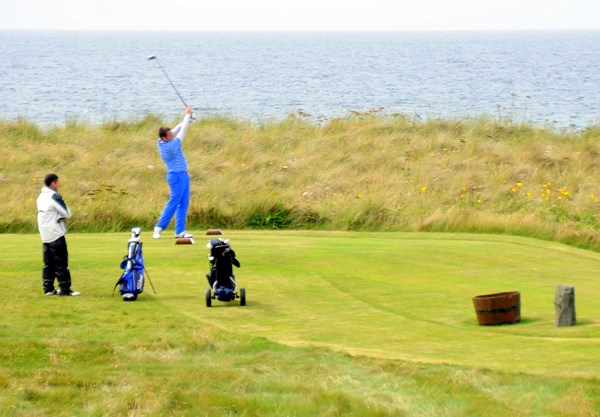 At the Lagavulin distillery on the Scottish island of Islay, a tour guide will tell you that the secret to making the complex, smokey whiskies for which the island is known is a counter-intuitive one: simplicity. The whisky comes from just three ingredients–water, barley and yeast. Nothing is added, unless you consider either the peat smoke from the barley-malting process or the skill of the distillers to be an additive.

The same principle, I think, applies another of Islay’s many attractions, the golf links known as the Machrie. The test of the Machrie is also a skillful blend of just three ingredients–terrain, turf and wind. It’s pure and simple golf.

The Machrie was laid out by Willie Campbell in 1891 in duneland by the shore of Laggan Bay.. From high points on the course, on a clear day, a player can look across the North Channel and see the low, green hills of Northern Ireland. The wind is a nearly constant factor, generally, but not always blowing in off the sea. 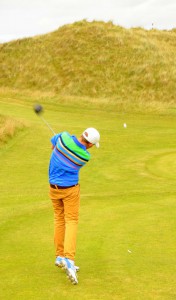 Campbell didn’t have bulldozers when he laid out the Machrie, so he left many of the dunes and hills in place, even when that place was directly in the line of play. About half of the full shots a player will hit on the Machrie are blind. On a couple of par fours, the 7th and the 17th, both the tee shot and the approach are blind. That’s the tee shot on No. 7 at right. The black and white stake atop the dune marks the line of play; the player aims toward the stake and hits his tee shot toward a fairway he cannot see. That fairway is filled with humps and hollows. The line to the green is indicated by another signpost atop a dune. The green itself is hidden from view in a deep hollow.

The hole, it should be noted, looks more difficult than it is. In truth, it’s usually not hard to carry the dune off the tee, provided a player hits it high enough. That’s partly because the prevailing wind is helpful, but partly because it’s not such a long shot. Other blind shots at the Machrie are similar. They look harder than they are (at least once a player knows the course a bit). But there’s tremendous satisfaction in hitting a blind shot to a green, walking around the obstacle, and finding the ball sitting close to the flag. It’s like coming downstairs on Christmas morning and seeing just the right presents under the tree.

There are no bunkers on many of the holes Campbell laid out. (For a variety of reasons, the course has changed somewhat over the years; perhaps half a dozen of Campbell’s original holes have been replaced.) He knew he didn’t need them. The turf provides hazard enough if it’s not cut. Stray very far from the fairways at the Machrie and your ball will disappear into wild grasses that grow to somewhere between ankle- and knee-high. These areas can be worse than water hazards. If you hit into a water hazard, you know your ball is gone and you drop one, take the penalty, and play on. When the ball disappears in the high Machrie rough, it may or may not be found. But finding it can be worse than losing it. It can take several strokes to move the ball out of the high rough to the fairway or green.

In recent years, the course has changed hands a couple of times, and the new owners have decreed that the high rough be cut down in some places to make the course more enjoyable for average players and quicker to get around. The course is undoubtedly softer as a result; but there’s still enough high grass to keep a herd of goats busy for weeks. 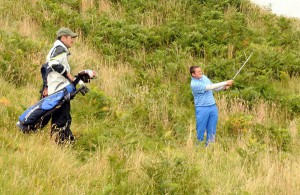 The layout is blessed with wonderful, natural golf terrain. There’s very little flat ground. Nearly every fairway has some mounds of hollows that demand thought off the tee. Some holes have ground rippled like a washboard. The greens are similar, if gentler.

I like the Machrie better as a match-play course than a stroke-play course. I make a lot of pars and birdies on the Machrie, especially when the wind is favorable. But I also seem to make a couple of triple-bogies in every round. Those triples only cost a hole in match play, but they stain the score indelibly in a medal round.

Fortunately, the Islay Golf Club’s premier event, the Kildalton Cross, has a match play component. Cross contestants play a couple of medal rounds and, if they quality, compete in a knock-out match play draw. Held each year in the first week of August, the Cross is a wonderful reason to make the trip to Islay.

It’s not the easiest trip. There are ferries from Kennacraig on the western coast of Scotland, that make the crossing in about two hours. And there are puddle-jumper flights from Glasgow that take half an hour. But the Machrie is well worth the journey.