In the cold light of day, I had to admit I was a terrible poker player.

I headed north from Atlantic City, bloody but unbowed. The dream was still alive and still in front of me. I was on a twofold quest, a quest to find great golf and to pay for my golf by winning at poker. As traffic ground to a halt due to construction on I-95 near Bridgeport, I was jauntily whistling the theme from Man of La Mancha. The tune flitted through my mind all the way to Foxwoods, the gambling and entertainment enterprise of the Mashantucket Pequot tribe that has transformed a corner of rural Connecticut.

The Golf: Lake of Isles North

Lake of Isles, the Foxwoods golf facility, suggests that the Pequot, who rose from the brink of extinction to become hugely wealthy, are still on a roll. How else to explain the fact that within a mile of their gargantuan hotel and gaming complex, they managed to build a golf course, designed by Rees Jones, that is as bucolic and beautiful as it is challenging?

Lakes of Isles North (there is a private course by the same architect, called Lake of Isles South) is spectacular. It winds over the wooded hills and ridges that look down on a placid little lake festooned in summer with blooming water lilies. But it’s no walk in the park.

Jones begins with a stern par five, 593 yards from the back tees, that rises steadily to a green that sits like a fortress near the top of a ridge. It introduces the player to one of the constant conundrums of Lake of Isles—how much does the elevation change affect club selection? In my case, two extra clubs were not enough to get home with my third shot. 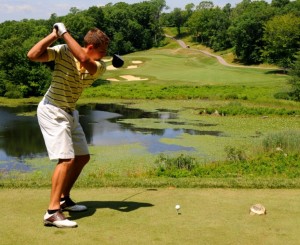 The tee shot on No. 17 at Lakes of Isles North.

The question was reversed on No. 2, a pretty, downhill par three over a cove in the lake. It takes a club or two less than the yardage indicates.

There’s nothing gimmicky about any of the holes at Lake of Isles. They follow the contours of the terrain. The greens don’t need artificial humps and hollows. They’re hard to read because quite often, they’re built into hillsides that help to create optical illusions. Putts that will break with the prevailing slope look flat.

Jones is not a sadist. He’s built some birdie holes, like Nos. 5 and 12, both short par fives. But for the most part, pars must be earned with accurate, well-thought out approaches to well-guarded greens.

The round climaxes with three memorable holes in succession. No. 16 is a steeply downhill par three to a lakeside green, though the water is a pretty backdrop rather than a strategic element. No. 17, played from the back tees, requires both power and finesse. The tee shot over the lake needs to carry 265 or 250 yards (there’s a much more sensible carry from the forward tees) to reach the fairway. From there, the player has to gear down for a delicate wedge shot to a small green that seems set on a pedestal. The finale is a variation on the classic cape hole, with the player choosing how much of the lake he’d like to try to carry to reach the fairway. The ensuing pitch to the green must carry a marshy environmental area.

The turf throughout is plush. The greens are smooth, the fairways are tight, and the rough is fair. If there’s a conditioning flaw, it’s in the bunkers, in which rocks and pebbles keep pushing to the surface. That’s inevitable for a new course built on land covered eons ago by a glacier, and it’s a problem that will diminish with time. Fortunately, thanks to the recent change in the rules of golf, players can remove pebbles that interfere with their play, even in bunkers. 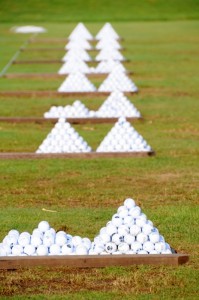 The small signs of a first-class operation.

With a green fee of $195 in the peak summer months (though there are discounts available with hotel packages), the course is not overrun with players and the pace of play is happily brisk. Troon Golf provides the management, and the service is impeccable. Little touches, like free iced water in the golf carts and pyramids of practice balls on the range, attest to a determination to run a first-class operation. Lakes of Isles North is one of the best resort courses I’ve encountered anywhere, easily an A+.

(To read how I rate golf courses, click here.)

For a casino, Foxwoods tries hard not to go over the top. There’s no neon in the décor. There’s not a lot of plastic. There’s a lot of wood paneling and there are atriums where actual sunlight filters in. There’s a food court with a Ben and Jerry’s. But when your casino can swallow up 25,000 visitors a day, it’s hard to be understated. The place is huge.

So is the poker room, so big you need a few minutes to walk from one end to the other. I registered for the $60, 1 o’clock no-limit hold ‘em tournament. As in Atlantic City, I needed a player’s card. But a pleasant man sent me to a cashier’s window where they took care of that right away. Then he asked me if I wanted my free new player’s tee shirt right away or whether I preferred to pick it up as I left.

What could be better? 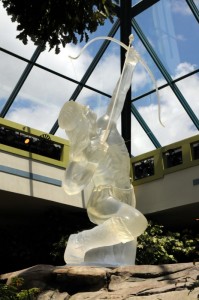 The Foxwoods mascot refrained from shooting me for poor play.

Well, actually knowing how to play poker might make it better. As the tournament quickly showed, I don’t. I don’t mean that I make bad choices, though I do. I mean that I can’t play the game.

There’s an essential physical skill involved in playing in a poker tournament. You have to be able to take your two hole cards, make a little tent with your hands, and peel the corners of the two cards up so that only you can see them. Experienced players do this quickly and easily. I have some trouble with it. I would prefer to actually pick up my cards, hold them close to my chest, and look from close range. But I think there’s a rule against it. Even if there isn’t, doing so would expose you as the worst sort of geek.

So I played a few hands with the little tent activity. I won one small pot, lost a few hundred on others. Then I pulled two hole cards, made my little tent, peeled the corners up, peered down and saw A-Q of clubs. I decided to play them, even though I know that poker abounds in tales of players who get beaten badly playing an A-Q. The flop turned up two clubs, the king and a small one. I hung on, even though a guy two seats down from me started betting in increments of a thousand. The river was a small club. There were no pairs on the board. I didn’t see any way I could lose.

“All in,” I said after the guy down the table bet two thousand. He groaned, but he was committed by that point. He called me and turned over two aces.

I turned over my ace of clubs…and the queen of spades.

I give Foxwoods an A as a poker venue. The people there are pleasant and professional. They even let me have my free tee-shirt, despite my incompetence. It’s just too bad I can’t play the game.