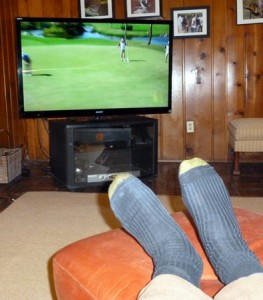 When I watch golf on television, I always choose an alternate channel to watch during the telecast’s innumerable commercial breaks. Usually, my fallback channel is showing an old movie. When I am in mid-season form with the remote control, my timing is finely honed. I can switch to my movie as soon as the network golf director switches to a cutaway shot from the blimp. I can switch back to the golf without missing a shot. By the end of a Sunday afternoon, I generally know not only who won the golf tournament but whether Rock Hudson and Doris Day lived happily ever after.

At this time of the year, though, my game isn’t quite as sharp, and I sometimes find myself inadvertently watching commercials. Which means, perforce, that I see a lot of Cialis commercials. Cialis sponsors televised golf for the same reason that Kaptain Krunch sponsors Saturday morning cartoons: it knows where to find its target audience. But as I watch, I have to wonder: What’s up with those bathtubs?

You may know the commercials I mean. If you don’t, here’s a synopsis:  Aging-but-still-athletic dude shares a moment with aging-but-still-hot spouse. The spark catches. And he’s ready and able, thanks to Cialis.

But then, in a visual representation of conjugal bliss, the winsome couple is always shown in separate white bathtubs, always outdoors. There’s no plumbing attached to these tubs, so we can assume that any water in them is cold. The tubs are only big enough for one middle-aged body to fit inside, no matter how lithe and attractive the body is in comparison to the middle-age norm. So we can assume that as long as the couple remains in these bathtubs, the most they can do is hold hands. And I wonder: Who thought separate bathtubs were supposed to be sexy? Wouldn’t it make more sense to show the happy couple together in, say, a nice, steamy hot tub?

But, what do I know? I also can’t figure out how Bubba Watson even occasionally hits the ball on the golf course with an action that looks to me like a ballet dancer with a nervous tic. I click on the remote. Rock and Doris fill the screen. Doris is wearing a hat that looks like the beehive on the state flag of Utah.

One Response to “The Armchair Gallery: What’s Up With Separate Bathtubs?”