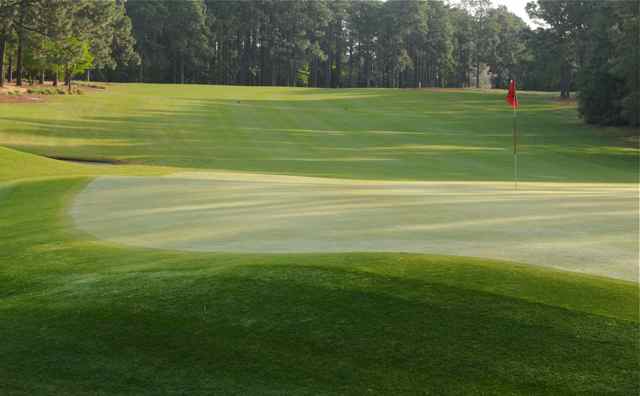 –Donald Ross designed the course in 1927.

–One of the founding members of the LPGA, Peggy Kirk Bell, bought it in the early 1950s and has been its careful steward for nearly six decades.

And here’s one thing fewer people know about Pine Needles:

–It’s a lot more fun to play than its famous cousin up the road, Pinehurst No. 2. 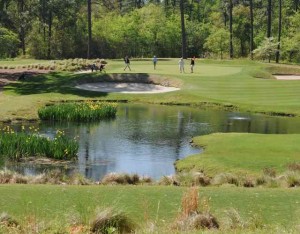 Pine Needles is the Donald Ross championship course for mere mortals—which is to say, 99.5% of the golfing population. Pinehurst No. 2, with its length and confounding slopes and swales, will beat the average player (or John Daly) into submission. At Pine Needles, Joe Average has a sporting chance.

Like Pinehurst No. 2, Pine Needles challenges players around the greens. But where  Pinehurst No. 2 is cruel, Pine Needles is merely mischievous. The greens are all raised, and they fall away on the edges; the general profile is like a turtle’s shell or an inverted dinner plate. If a player misses the green, or rolls through, he’s often going to roll downhill to a little hollow, and then back up a facing slope. So his chip will often be from a downhill lie. It will have to carry the little hollow, check on the upslope of the green, roll over the crest of a knob, then stop on a downhill slope. It’s as complicated to execute it as it is to write about it.

The difference is that at Pine Needles, the player will always be able to see where he wants the ball to land. At Pinehurst No. 2, that spot will sometimes be above his  head. Pinehurst No. 2 is steroidal Donald Ross.

In many ways, the two courses show their shared bloodline. They’re both laid out on sandhills ground, some of the best golf topography to be found in the United States. The soil drains instantly, and it produces tight golfing turf. Both courses wend their way through corridors of towering pines, and a brown carpet of pine needles borders every fairway. The bunkers on both are edged with tufts of love grass.   Both are great walking courses, with short distances between greens and tees. 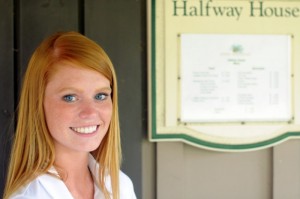 Dispensing smiles and Gatorade at the halfway house.

Both have been tweaked repeatedly over the decades since Ross died, in 1948. The latest revisions to Pine Needles, supervised by John Fought in 2004, changed No. 15 into a medium-length par 5 instead of a longish par four. No. 14 became a par four instead of a tight, double-dogleg par five. I’m not sure this was a real improvement, but the new green on No. 15, I will testify, is as hard to hold as anything Ross designed.

The two differ markedly in ambience. Pinehurst is very corporate. It’s a temple of the game, and it knows it.  Pine Needles is a family enterprise. Mrs. Bell, in her 80s, is still a presence, greeting guests in the dining room and offering tips at the practice range. Her children and in-laws manage the operation. The service is always friendly and unassuming.

The lodge at Pine Needles is an inviting, comfortable place, with a big stone hearth in the sitting room and a commodious bar with a picture window overlooking the primary putting green. (There’s a second putting green on the other side of the building with the sort of slopes that send missed putts rolling back to the feet of the putter. Since it’s lit, it’s just the place for an after-dinner putting contest for slightly inebriated buddies.)   Thanks to Mrs. Bell’s influence, the resort makes a special effort to cater to women, and they find it agreeable. The groups in the dining room generally include an eightsome or two of them.

Now, Pine Needles has become a value. The resort’s management has created several categories of membership that combine access to Pine Needles and its sister course, Mid-Pines, with steep discounts on lodging and other benefits. Donald Ross, a frugal Scot, would approve.