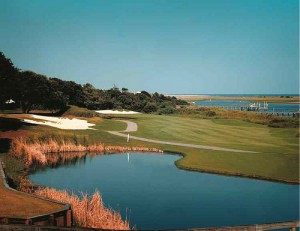 I don’t remember the exact year in which I first played golf on South Carolina’s Grand Strand. It was sufficiently long ago that you could still see Arnold Palmer playing on the PGA Tour, and you wouldn’t have been entirely out of your mind to root for him to win. Back in those days, golfing on the Grand Strand was like finding Cutter and Buck shirts selling for $10 apiece at an outlet mall.  There were perhaps two dozen courses dotting the pine forests along the 60 mile stretch of coast that begins at the North Carolina border and extends south through Myrtle Beach about sixty miles, to the port of Georgetown. They were all open to the public. Most of the year, you could walk up, fork over twenty-five or fifty bucks, and tee off.

No one was going to confuse the Grand Strand with Pebble Beach or Pinehurst. But the courses were solid, the pace of play was reasonable, and the experience beat the hell out of public golf almost anywhere else I’d ever been. I loved it.

Myrtle Beach, though I didn’t know it at the time, was at the beginning of a boom. For about two decades, new courses by designers like Tom Doak, Mike Strantz and Jack Nicklaus opened every year. I used to organize a Grand Strand trip for eight buddies every March. We’d play 36 holes a day and add a good new course to the rota every year.

But the Strand, in my opinion, didn’t cope well with prosperity. My annual buddy trip ended one year after the guy behind the counter at Caledonia Golf and Fish Club took our $125 green fees. We had booked the earliest tee times way in advance, because we needed to finish and get down the road to a course called Willbrook for our afternoon round.

“Can we warm up?” someone asked.

“Putting green’s closed,” the man behind the counter said, unapologetically.

“Then can we start early?” someone else asked. “We need to get finished by noon.”

“Wouldn’t do you any good,” the man said. “You’re going to have to wait until the groups starting off on the tenth tee have finished. “

We were going to be late for our tee times at Willbrook. But that was our problem, not his.

Something had changed on the Grand Strand, and not for the better. Southern courtesy had given way to indifferent service. Reasonable green fees had been replaced by high tariffs at the courses with good ratings in the golf magazines. The brisk pace of play had given way to interminable waits.

I stopped playing much golf on the Grand Strand around that time, partly because of experiences like the one at Caledonia and partly because I had growing kids. When we took a vacation at the beach, I limited myself to an hour or two of practice every day. There were, by this time, more than 100 courses on the Strand. A lot of them had first-class practice ranges. I was content.

Six or seven years ago it became evident that I was not the only golfer playing fewer rounds on the Grand Strand. Courses started to go under. Some were bought cheap by developers and turned into housing or shopping malls. Some just faded away quietly. No one cut the grass. Weeds grew in the bunkers.  Grand Strand golf became the symbol of hard times in the industry.

I had hopes that there might be some benefit in this for the average customer. Maybe, I thought, the golf courses would respond to adversity by making the golf experience more pleasant. A few months ago, I had a chance to test that theory.

My wife and I were once again spending a week on the Strand. My kids are grown now, and my wife has taken up the game. So there was no reason to confine myself to an hour or two of practice sessions. We could play.

I booked a 2:15 tee time at the Litchfield Country Club, thinking that going off late in the day would spare her the pressure of being on the course with more serious and experienced morning players.

There are bargain green fees to be had these days in Myrtle Beach.  But not by everyone. If you have a local driver’s license, you get a discount. If you book a hotel-golf package, you get a discount.  If you pick up a coupon book at the Piggly Wiggly grocery store, you can get a discount. But if you’re a guy, like me, who comes in from out of town and calls the course to book a tee time, you pay the full freight and you feel like a mark, even if the fee is under $100.

My wife and I showed up half an hour before our tee time, hit some balls, chipped, putted and moved toward the first tee. Precsiely at 2:14, as we hit our final practice putts, a pair of carts containing four men in dark jeans and bowling shirts pulled up to the first tee ahead of us. The men were chattering happily in an accent I could not quite place. It sounded like the one the late Andy Kaufman invented for Latka Gravis on the old TV show, Taxi.

I watched, both irritated and bemused, as the Latkanites hit four balls in four different directions, none of them straight. They laughed and giggled. The door to the golf shop opened and the assistant pro who’d taken my green fee emerged.

“What was their tee time?” I asked, gesturing toward the laughing Latkanites, who appeared to be discussing the advisability of hitting Mulligans.

The pro shrugged and did not respond directly. “I can send you out to the second tee,” she said. I said no. My wife is a novice, and she didn’t need the added pressure of playing through a group of men, however inept they were.  When the Latkanites finally cleared the fairway about fifteen minutes later, I was so steamed that I yanked my tee shot into a swamp.

And so it went for nine holes: hit the ball. Wait. Hit the ball again. Wait again. Hit the ball many times. Wait many times.  The Latkanites made way after the ninth, heading into the clubhouse for more beer. But a couple had inserted themselves into the slot ahead of the Latkanites. The male half fancied himself a golf pro, and the female half became his pupil. So on the back nine our routine became: hit the ball. Watch man demonstrate the backswing to his wife. Watch wife foozle the ball. Wait.  We finished nearly five and a half hours after we’d started. 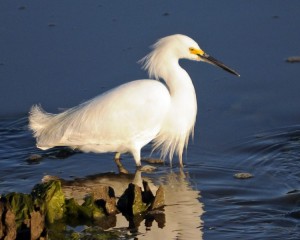 My wife and I tried to play a full round once more that week, at a course called Heritage. Once again, the pace of play was excruciating. As we waited on the fifth tee, a marshal came by and commiserated. He tried to move people along, he said. But on the Grand Strand, the courses all too often overmatch the players. On the tenth tee, we sat for twenty minutes waiting for two groups ahead of us to clear the fairway, I realized that the guy standing on the edge of pond ahead of us, shooting photographs of egrets, was having a lot more fun than we were.  By the 11th, after watching a woman ahead of us flail four times at a ball in a greenside bunker, we’d had enough. We went home, leaving the last seven holes unplayed.

The next morning, the Myrtle Beach paper carried the news that yet another Grand Strand golf course, this one called Brick Landing, had gone belly up.

I was not surprised.