The 11th green at Paradiso del Garda, with the hotel in the background

We know that travelers to Italy go for the food, the wine, the opera and the art. But should they also go for golf? On a recent trip to northern Italy, traveling from Milan to Venice, I sampled five courses. Some were rated among the top dozen or so in the country. Some were simply on the way. My first report was on Bergamo, the second was on Venice and the third was on Garda Golf Country Club.

Herewith a report on Paradiso del Garda, a resort near the southern end of Lake Garda:

An American land developer would probably call the golf course at Paradiso del Garda one of the amenities in a comprehensive leisure destination. There’s a hotel by the first tee, a property of the Italian Parc Hotels chain. There are clusters of condos along many fairways. There’s a soccer complex for boys attending the summer camp run by Inter Milan. As if to underscore the profit-making intent of the place, the owners have sold the pin flags as advertising. A jeweler in the nearby town of Peschiera uses them to inform golfers that he carries watches by Audemars Piguet.

For all of that, American designer Jim Fazio has presented a solid and imaginative golf course. It’s got big greens with a lot of undulation. It could be a very exciting match play venue, because the course rises to a crescendo with a series of holes that offer birdie chances to the bold.

No. 14 is a par five that winds to the right around a lake in the form of an inverted fishhook. The player who wants to reach the green in two has to carry the last 150 yards over the water and hold the ball on a shallow surface. The conservative, three-shot  route offers more green to shoot at, but the player still has to place his layup shot between the water and some bunkers, then hit a precise short iron that will find water if it’s pushed or faded.

No. 17 is a par four, about 280 yards, which long hitters can reach off the tee. But the direct route to the green is all over water. The timid play an iron into the fairway and have a short pitch to a large, undulating green. It’s one of two good, drivable par fours on the course, the other being No. 7.

The line of play on the finishing hole, another par five, twice crosses marshy water hazards. Long hitters can try to reach the green in two, but they won’t see the flag with their second shot, and they’ll have to fade it around some trees. Short hitters have to place the second shot on an island of fairway between the hazards, then carry the water again with their approach shots.

Despite its strengths, I rated the course a C. (To read how I rate courses, click here.) The esthetics of the layout are marred by the condos and wire mesh fences that keep golf balls from leaving the property. The course is bounded on one side by Autostrada A-4, and the sound of passing trucks doesn’t enhance the experience. Lake Garda is in the region, but almost never visible from the course. The fairways had many bare patches, which detracted from the conditioning score. I played in mid-summer, and I was told that the turf would be better in the fall. Perhaps at that time, Paradiso would be a B.

For an American, there are dining experiences in Italy that call to mind Plato’s analogy of the prisoners in the cave. Plato told us that most men experience only a meager approximation of life in its ideal form. They are like prisoners chained to the wall of a cave, and they can see only the shadows that are cast on the walls of their prison. They may see the shadow of a rose, and for them, that shadow is a rose. They never know what the flower really looks like. 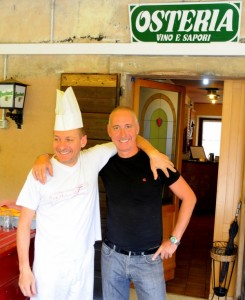 Luca (left) and Paolo Rossi at their restaurant in Monzambano

This is a long way of saying that you may think you know a dish like macaroni and cheese, but you don’t really know it until you’ve had it in a place like the Trattoria Hotel al Caminetto, which is in Monzambano, on  Via Umberto I. That’s about 12 miles downstream along the River Mincio from Paradiso del Garda. It’s well worth the drive.

If you stop in, you’ll probably meet Paolo Rossi, the head waiter. His brother Luca is in the kitchen. Order the menu item called, simply, “three.” It’s a three-dish pasta sampler, with the emphasis on local specialties. Leave it to Paolo to decide which ones you’ll get.

First there might be a tagliatelle caserecce, wide noodles with a meat sauce. Then might come tortelloni of the season, using ripe local produce like pumpkins in the sauce.  Maybe the ultimate will be maccheroncini with mixed herbs. You’ll taste it, and you’ll immediately know how to assess all the Kraft mac and cheese you ever ate in a school cafeteria. It was the shadow of the flower on the wall of the cave. The dish in front of you is the rose.

Off the Course: Wineries

You can’t play golf all the time; nor can you spend all your time in a trattoria. The wineries of northern Italy neatly solve this scheduling problem. They’re scattered all over. Just get off the Autostrada and look for a sign. 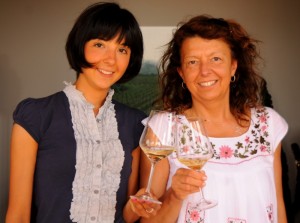 Laura and Milena Rizzotto at their family's vineyard, Balestri Valda, near Soave

It would be a good idea to do this in a town like Soave, just off the A-4 between Verona and Venice. A roadside sign near the center of town might lead you into the countryside, along winding roads and up gentle hills, to Balestri Valda. You’ll see a red stucco building with white trim. Inside you’ll find Laura Rizzotto, the granddaughter of the proprietor and the winery’s director of marketing.

Cirillo Rizzotto founded the winery in the 1950s; at first he made a sparkling wine. Laura’s father diversified production in 1994, making still white wines. Today the winery produces 60,000 bottles a year, including a Soave, a Soave Classico, and a sweet dessert wine. You can sample them all, and as you sip, Laura will walk out to the vineyard and bring back some black pebbles, the remnants of a prehistoric volcanic eruption. The volcanic elements in the soil help explain the complex taste of the wine. So does the fact that the Classico is made from a unique local grape, the garganega. The wines also spend a month or so in oaken barrels, giving them just a hint of an oaky flavor, far less than some chardonnays.

Unfortunately, the Balestri Valda wines are not exported to many countries. Like a lot of the small-vineyard products of northern Italy, you have to buy them and drink them near the point of production.

There are worse fates.

There may come a time in an Italian golf odyssey when one feels the need to see a beautiful landscape absent the company of ball and clubs. About eight miles down the road from Paradiso, there is just such a spot: the Parco-Giardino Sigurta. 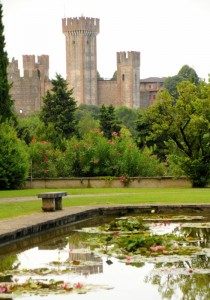 A lily pond at Parco-Giardino Sigurta, with the 14th century castle built by the Scaligeris in the background.

This was once the secluded domain of a wealthy Milanese businessman, Carlo Sigurta, who owned a weekend mansion in the pleasant little town of Valeggio sul Mincio. The 120 acres or so of land out back were dry and dusty until Sigurta acquired the right to divert water from the River Mincio, which flows south out of Lake Garda to Mantua. Many miles of irrigation piping, and years of labor by countless talented Italian craftsmen followed. Signor Sigurta wound up with one of the most extensive gardens in Europe. His descendants in 1978 opened up the bulk of it to the public. The entrance fee is 12 euros.

The gardens are designed so that something is blooming most of the year. Tulip time is followed by rose season, which is followed by iris season, and so on.

The gardens also offer a vantage point to see the Mincio valley and understand a little bit of Italian history. Not far away are the ruins of a castle, built by the Scaligeri family, which ruled nearby Verona from 1260 to 1387. Below the castle is a bridge spanning the river, near a picturesque village called Borghetto. The bridge was built in 1393 by Gian Galeazzo Visconti, who took over Verona from the Scaligeris.

It would be nice to report that Visconti built his bridge to help people cross the Mincio without getting their feet wet. That, alas, was not his intent. The bridge was part of a complex that included a dam. Visconti’s plan was to divert the river away from Mantua, ruled by rival tyrants, and force that city to submit to his dominion—or die of thirst.