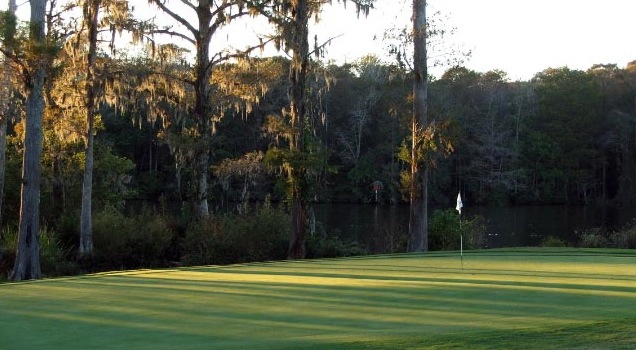 The 18th green at Wachesaw, with water left and long

Wachesaw, near Murrell’s Inlet, is one of the few genuinely private clubs in the area. And, thanks to a site on a bluff overlooking the Waccamaw River, it has real, God-given elevation changes: slopes that go down and up and sideways, especially on the final four holes. Nearly all the other Grand Strand courses welcome the public, with all that public golf entails. And if they’ve got hills, they got them from a bulldozer. 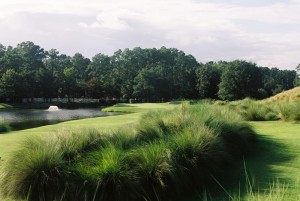 The par-three seventh at Wachesaw, 180 yards

Bulldozers, to be sure, had a hand in the creation of Wachesaw Plantation, a Tom Fazio design that opened in 1985. Fazio’s crews sculpted flat ground into undulating waves and high, barrier dunes. If the architect had heard of minimalism in 1985, he didn’t let it inhibit him.

Fazio created a small earthen fortress to guard the green on the short par four 14th, which plays only 332 yards from the back tee. Lest big hitters easily roll a drive onto the green, he placed a berm in front of the putting surface, reminiscent of the berms that guard some European holes, notably the 18th at Dooks in western Ireland.  The pitch to the green is nearly blind, and if its not struck precisely, it will roll through and into a wooded gulch.

But Fazio didn’t need earth movers for the final few holes. No. 15, a par four that plays 389 yards from the back tees, begins near the ruins of an old rice plantation house called Richmond Hill. The tee shot lands in a flat stretch of fairway, but the green is set in a dramatic little hollow where the land begins to fall away toward the river.  At No. 17, 201 yards from the back tee, the narrow green is perched well above a sluggish little tributary of the Waccamaw . Anything hit to the right will carom down 25 feet into the water. The back tee for No. 18, a 565 yard par five, is set behind the tributary, and the tee shot has to carry the water and rise to find a fairway that begins well above the level of the tee.  The closing hole, with water lining the left side all the way, ends at a green set on the bluff high above the river. Pleasure boats cruise by where cargo ships once took on rice bound for Europe. 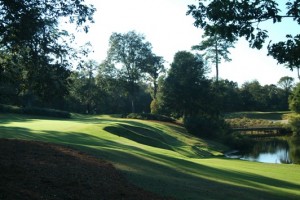 The course is, overall, manageable and fun to play. The greens are excellent, though the fairways show signs that maintaining good turf is a challenge here. The fairway grass was scraggly in spots, though always playable. Many of the fairways have French drains below them, a sign that rainwater tends to pool on the surface. A couple of the tees, especially the ones shaded by live oaks, had recently been sodded.

Wachesaw is a more traditional country club than The Reserve, the private course five miles down the road in Litchfield Beach. It’s got the amenities of a first-class golf facility, including an excellent practice area. It’s also got tennis courts, a swimming pool, and a restaurant that’s open for dinner. But it’s not a stuffy club. The members are friendly and welcoming. Wachesaw has several membership plans, including a national membership that is very reasonable for occasional visitors to the Grand Strand