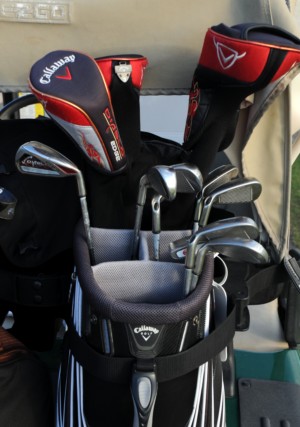 What’s the most annoying aspect of a golf trip?

To me, it’s not the snoring roommate. It’s not the ground ball I hit off the first tee because my back is still stiff from sitting in coach. It’s not even the three-figure green fee on a course the locals pay $75 to play.

It’s traveling with my golf clubs.

Everything about the process irritates me. First, it’s stuffing the golf bag into the travel cover. Ever since golf bags got legs, that’s been like trying to stuff a plump, squirming child who doesn’t want to go out into a snowsuit that’s a size too small. Then it’s getting the bag into the car or cab, an endeavor that only a spinal surgeon could love. Then it’s schlepping the bag through the airport. I submit my clubs to the tender mercies of an airline, knowing there’s a chance the bag won’t make my tight connection in Atlanta, or will be lost, or that clubs will be broken. At the other end, even if none of these disasters have befallen me, I’ll be stuck at a luggage carousel for half an hour waiting until all the other bags have been unloaded. And in the last year or two, the crowning indignity–a $75 fee demanded by the airlines for putting myself through this misery.

A second option–shipping the clubs via a carrier like FedEx–solves only a small part of the problem. I’ve still got to pack them and schlep them. I’ll avoid the wait at the luggage carousel, but I’ll have to do without the clubs for a few days before and a few days after the trip unless I pony up for overnight air freight. Even if I choose a slower shipment method, I’m still going to pay–probably more than the airlines charge.

So on a recent golf media trip to Cancun, I decided to try a third option–rental clubs. 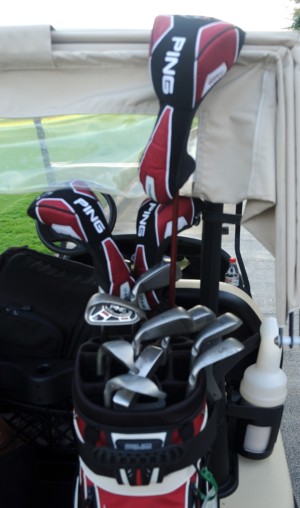 I couldn’t remember the last time I’d rented clubs, but the memories were infused with negative imagery: Bright orange bags with “RENTAL” written on them in big black letters. Mismatched clubs at least 15 years out of date. Clubs that seemed suited for grandmothers or lumberjacks, but not for me.

I’d heard that golf resorts were responding to the higher costs of flying with clubs by upgrading their rental inventories. And there was another factor that induced me to experiment. With no fewer than five brands represented in it, my own bag was looking very motley. I’d picked up clubs for particular purposes–a sand wedge here, a hybrid there. I’d gotten a new set of irons, then decided that the old ones in the garage were better. All 14 clubs had served me well at times, but they’d also let me down often enough that I didn’t feel I couldn’t possibly play without them.

My choice felt good from the moment the plane landed in Cancun and I walked off with my carry-on luggage, bypassing the baggage claim area.

In Mexico, I played four rounds with rental clubs. In addition to asking whether I was right-handed or left-handed, the golf courses wanted to know what kind of shaft flex I preferred. A second good sign: There were no orange bags. A third good sign: My clubs were always shiny, new or nearly new, and always a matched set. I got the regular shafts I asked for.

My first bag, at the Moon Spa & Golf Club, was full of Callaway Diablos. They were clearly “game improvement” clubs. The irons were offset to help slicers square the club face at the bottom of their swings. The cavities behind the iron faces were big and deep. The soles of the clubs were wide to make it harder to dig into the ground and hit fat shots. The set consisted of a driver, 3- and 5-woods, 4-9 irons, three wedges and a putter. I would have liked a hybrid with the loft of a 3-iron, but there wasn’t one.

I thought that the driver, like a lot of “game improvement” clubs, looked like it was built with a face that was closed a degree or two to combat slices. My first tee shot, a dead yank into the woods on the left, reinforced that suspicion. For the rest of the round, I weakened my grip and tried to align the face a bit on the open side every time I teed it up. The rented driver gave me roughly the same distance I got with my own. The irons also carried roughly the same distance as my regulars and I liked hitting them. They picked the ball off the turf nicely and the sweet spot seemed enormous. The putter, an Odyssey blade, was like my own Ping. It made a few, missed more. By the end of the day, I could attribute only two of my 80+ strokes to the rental clubs–that initial drive into the woods and a skulled bunker shot that I blamed on the unfamiliar bounce of the sand wedge.

On my next round, at the Playa Paraiso course at the Iberostar Hotel in Playa del Carmen, I drew Ping G-15 clubs. Like the Callaways, they were game improvement clubs with offset heads and heavy perimeter weighting. As with the previous set, there was no hybrid in the bag. But the driver seemed to have a neutral face. I had no problems playing with them and discovered a little bonus that comes with rented clubs. On the 17th hole, I pulled a ball off the fairway. I had a pebbly lie and my backswing was cramped by a banyan tee. With my own clubs, I probably would have declared an unplayable lie, if only for fear of gouging a clubhead or bending a shaft. But with the rental clubs, I blithely took a swing. I was reminded of one of the first lessons I’d been taught as a reporter for Associated Press: Never take your own car to cover a hurricane. Always rent one. 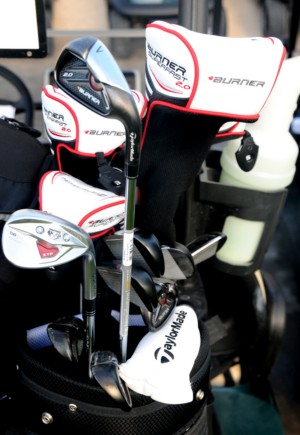 My third rental set was provided by the El Camaleon course at the Mayakoba resort. The clubs were TaylorMade Burner 2.0 irons and woods. They’re not the latest models TaylorMade offers; it’s a company that prides itself on frequent model changes. But the set came with a 21-degree hybrid that got the ball high in the air and landed it softly from about 180 yards out. I also got up and down a couple of times using the hybrid to bump the ball through a chipping area and up to the hole.

One of the few reservations I have about rental clubs involves hybrids. If a golfer is attached to them, he ought to check in advance to see if they’re available.

I liked the TaylorMades. In fact, I’m starting to feel the yen to get fitted for a set. But even if I buy them, I doubt that I’ll be taking them on the road that often.

If I’m flying off to play multiple rounds of competitive golf with some serious friends, I’ll probably still take my own clubs.  But if the agenda is just a casual round or two on a vacation, I won’t. Rental clubs are the way to go.