The ninth green at Nags Head, with Roanoke Sound in the background

The most appropriate words I can think of for Nags Head Golf Links came from a tennis player. Back in the 1970s, I covered a tournament in Washington that featured an Argentinian clay court specialist named Guillermo Vilas. The tennis stadium was in Rock Creek Park; nearby was an outdoor amphitheater. Someone, for some reason, had scheduled an African dance troupe into the amphitheater for the week of the tournament. The troupe was performing, loudly, on an evening Vilas played a match. Vilas ground down his opponent to the steady beat of an African drum. Afterwards, he was asked how the drumming had affected the match. 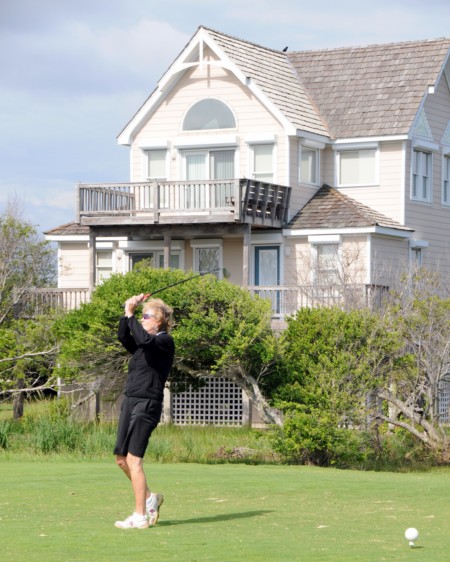 Houses surround the course at Nags Head. The tee at No. 3

“You have to have strong mind to play here,” Vilas said.

There are neither drummers nor dancers performing in the vicinity of Nags Head G.L., which is on the Outer Banks about 14 miles south of the Wright Memorial Bridge that connects mainland North Carolina to the barrier island. But a strong mind is still required, because Nags Head will play with a golfer’s head if he lets it.

To begin with, designer Bob Moore faced some limits. He worked with a narrow, wet plot of land between Highway 158 and Roanoke Sound. The developers wanted a lot of what dry ground there was for the houses and condos which now surround the course. Not surprisingly, the course has occasional drainage issues. I played several days after a tropical storm had passed through, and there were still large ponds of casual water on the course, particularly at the 7th hole. I could see tadpoles swimming around my golf ball, which had landed where fairway was supposed to be.

The exigencies of the site dictated a short course, only 6,126 yards from the back tees. The driving range is only about 150 yards long, and the course supplies restricted-flight Cayman balls for warmup purposes. There are a lot of blind and semi-blind shots on holes that are wedged around dunes and wetlands filled with head-high vegetation. Not for nothing does Nags Head call itself “the longest 6,126 yards in golf.”

The first hole gives the player a good sense of what is in store. The cart path from the clubhouse leads to the top of a dune where the tees are located. The orientation of the markers shows that the hole plays toward the ocean, about a half-mile away. The scorecard says the hole is only 292 yards. But where does the tee shot go? Looking along the tee line shows the player only scrubby maritime thickets and the cupola of a house across Highway 158. Neither green nor fairway is visible. A stroll to the very front tee reveals that there is a fairway down there, it’s pretty wide, and a long iron will be enough club to set up a short pitch to the green. But, still, it’s a blind first shot, into the prevailing ocean wind, with plenty of gunch to eat up a sliced ball. Aim at the cupola. And, as Guillermo Vilas would tell you, have strong mind. 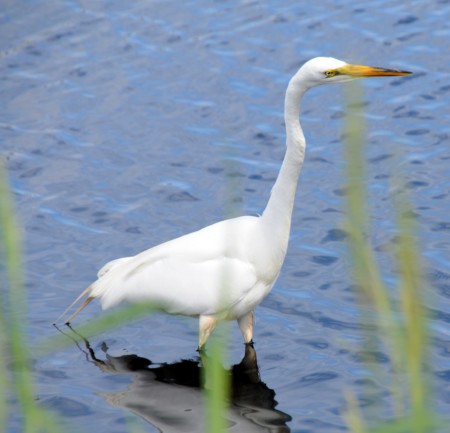 For most players, the highlights of the course will be the holes along the sound, Nos. 5, 9, 15 and 18. They’re good ones. The fifth is a par five, 513 yards from the back tees, where strategy is dictated by a 90-yard long pond that juts into the fairway from the sound side. A long hitter can likely carry the pond with his second shot, perhaps reaching the green. But most players will have to lay up. They can lay up short of the pond, leaving a long third shot to the green, or play to a narrowing slice of fairway that will leave a wedge to the green. It’s a fine example of a par five designed so that the second shot isn’t a mindless layup for the player who can’t reach the green in two.

No. 9 is a short, tight par four, with the tee shot that has to carry a patch of gunch and find a fairway that is only partly visible from the tee. The second shot has to carry another scrub area. Tug either shot and the ball is in the sound.

No. 15 is a tough, 221-yard par three from the back tee, with the sound on the player’s right side. Particularly in difficult winds, the prudent play for the golfer who tends to slice the ball may be to lay up short and left and try to chip the second shot close enough to make a one-putt par.

No. 18 is a tough finishing hole, playing 583 yards from the back tees, with the sound lining the entire right side. As on No. 5, the design makes players think before they hit their second shots, even if they’re laying up. In this case, designer Moore created a bottleneck in the fairway about 190 yards from the green, hemmed in by vegetation and sand. If the tee shot is weak, a player has to decide whether he can hit the second far enough to clear the bottleneck. If not, he has to lay up and leave himself an imposingly long third shot to the green. 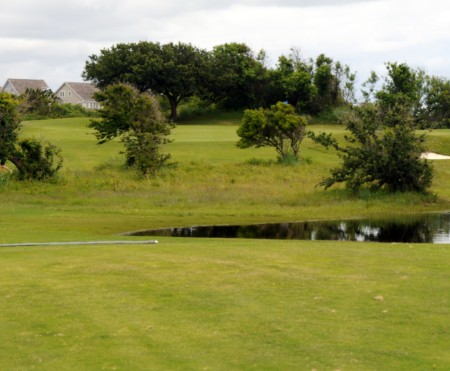 The seventh green from the seventh fairway, with trees and casual water in the line of play

Despite the pleasures of the holes along Roanoke Sound, I came away thinking that Nags Head could be improved by more zealous use of a chain-saw. Dotted around the course are clumps of eye-high, scrubby trees that block lines of sight and play. Sometimes, they’re fairly innocuous. On the first hole, for instance, a clump of trees can block only the player’s view of the left side of the green. But on the eighth hole, a wetland and a wall of scrubby trees make the second shot to the green completely blind if a player opts to aim his tee shot to the right side of the fairway. That’s the side that requires a shorter carry over the pond that sits in front of the tee.

At least on No. 8, the player can avoid the blind shot if he risks the longer water carry to the left side of the fairway.  On No. 7, there’s no option. Wetlands and vegetation block the view of the right side of the fairway, making the tee shot partially blind. Then, from the fairway, a player sees a patch of long grass with trees growing in it between his ball and the green. There’s no evading this obstacle. It must be carried. Again, a strong mind will help.