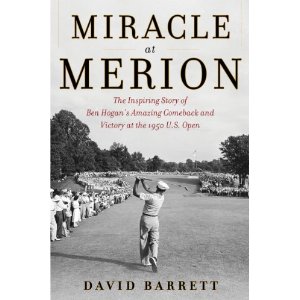 I have never been one of those who feel compelled to say or write “Mr.” when referring to Ben Hogan. In fact, I’ve always been a bit irritated by Hogan’s hagiographers. The man was a great golfer, yes. Certainly, he showed enormous grit overcoming his father’s suicide and his automobile accident. But let’s face it. He could be a surly, misanthropic human being.

That’s one reason I liked David Barrett’s new book, Miracle at Merion. While giving Hogan his due as a golfer, Barrett doesn’t try to canonize him.

I say this because I’ve heard numerous stories from old pros who sought, with some justification, a favor from Hogan. One pro told me of a niece who had a tenuous first job in journalism and wanted to interview Hogan. Another talked about how, when the senior tour first started, a lot of the players really needed money. They asked Hogan to play, to make an appearance or two that would boost revenues.

In those cases and others, the answer was a curt no, even though on many occasions before his success Hogan had depended on the generosity of his peers. Hogan would, instead, spend his days, largely alone, in the clubhouse at Shady Oaks, his club in Fort Worth.

A man’s entitled to spend his time as he pleases. But in taking the attitude he did, Hogan legitimized a self-centered and misguided attitude that to this day is an ugly carbuncle on the face of professional golf.

Hogan liked to refer to the golf course and the practice area as his “office.” He reasoned that a businessman could close his office door and talk to no one if he wanted, shutting out the public and the media. So why couldn’t a golfer?

His opinion resonates to this day. I scowl every time I hear a professional golfer refer to the golf course as his office and to fans and reporters as intruders in that office. I wince when I hear one refer to himself as an “independent contractor.”  I would like to tell them that if they want to work in an office, they ought to get jobs as accountants or insurance brokers. If they want to be independent contractors, they can go to work hanging drywall in new houses.

Professional golfers are entertainers. Unlike the owner of a widget factory, or the plumbing contractor, they produce nothing of inherent value. The ability to play a round of golf in, say, 66 strokes is worth something only if people are willing to pay to watch it done. And people are only willing to pay if the 66 occurs in a tournament.

This leads me to two conclusions. A professional golfer should be solicitous of the fans and of the media. And he should be grateful to his fellow pros, without whom there would be no tournament. Sadly, many aren’t. They brush past the fans. They shun the press. They make decisions about where they’ll play for purely personal reasons, never considering the health of the tour.

I think you can trace the roots of this attitude to Hogan. Barrett, to his credit, doesn’t ignore the times between 1948 and 1950 when Hogan was unpleasant or unavailable. And he punctures a few myths. Hogan’s “secret,” which supposedly prevented hooking, was hyped to help sell an instructional article to “Life” magazine. Despite it, Hogan still hit the occasional wayward tee shot out of bounds to the left. And the famous one-iron Hogan hit to the 72nd green was required because he’d played a shaky final round, a four-over 74. He probably should have won the 1950 Open going away, rather than in a Sunday playoff.

But, of course, it was a miracle that he even played a second round that Saturday, considering how badly he’d been injured 18 months previously. “After hitting his drive on the 12th hole, Hogan was seen to stagger and almost fall, grabbing onto someone for support,” Barrett recounts. Hogan in later years gave different accounts of the pain he was in, sometimes downplaying it and on one occasion saying that his legs had turned to stone. Barrett’s conclusion is that Hogan was indeed close to collapsing, most likely because of extreme swelling in his battered legs.

But Barrett is a careful reporter, and he resists the temptation to embellish the story. There’s an oft-told tale that Hogan wanted to quit on the 13th green, but his caddie told him, “I don’t work for quitters. I’ll see you on the 14th tee.”  Barrett’s research suggests that this quote is a myth that probably originated ex post facto in the Merion caddie yard.

Barrett has based his account largely on documentary records. Some were in old newspaper articles. Some were in the archives of the United States Golf Association and Merion Golf Club. But there are still some surviving witnesses to all or parts of what Hogan did between 1948 and 1950, including old pros like Bob Toski and writers like Jim Finegan, who, as a college student, followed Hogan’s rounds at Merion. Barrett interviewed them and weaves their recollections into his tale.

Wisely, Barrett focuses not just on Hogan, but on the other men who contended in the 1950 Open, half-forgotten players like Joe Kirkwood Jr. and Dutch Harrison. His account includes capsule biographies of a dozen or more stalwarts of the era, men who force Hogan to excel.

It’s a compelling story, and Barrett has told it well.

I should add a bit of disclosure here. I have known David Barrett for more than 15 years. He edited some articles I wrote for Golf magazine, back in the days before that journal’s qualitative demise. We’ve worked together on some subsequent projects, and we’re colleagues at www.theaposition.com.

But I’d recommend this book if I didn’t know him. It’s a great read about one of the great stories in golf history.

One Response to “Hogan Without a Halo”