The 17th at Verona, flanked by a vineyard

Fair Verona, where we lay our scene, (I don’t know why, but those words just come to me), is an elegant and sophisticated city. One would expect it to have, in addition to fine shops, historic architecture, and delicious dining, an estimable golf course. Verona does not disappoint.

Back in the 1960s, when golf was still an exotic sport in Italy, a group of British expats working for a pharmaceutical company got together with a group of worldly Veronese and founded a golf club. They bought a farm in hilly vineyard country about 10 miles west of the city, near a village called Sammacampagna. It was an unpretentious group. On weekends during construction, the founders contributed labor to supplement their financial investment, clearing rocks from the soil themselves. They scrubbed the cattle barn that would become, in a highly renovated form, their clubhouse.

Golf Club Verona was and remains a friendly, comfortable place to play golf. It’s not a course that will ever host a Ryder Cup. But it is a great site for a round that will complement the many pleasures of its city.

The first hole established the virtues of the course quite nicely. From an elevated tee atop a ridge, the golfer looks out over a fertile valley to the left, full of vineyards and red-tile roofs. The fairway on this par four is reasonably generous; the hole becomes more challenging on the approach. The green is well-bunkered and small.

The rest of the front nine follows the contours of the slope falling away from the summit of the ridge. Holes go back and forth; they’re lined by trees and many have tiered greens. The ninth must regain the elevation lost, and it does so abruptly. The green is forty feet or so above the tee. It feels like you’re standing on the street, trying to hit an iron shot onto the roof of a four-story building. 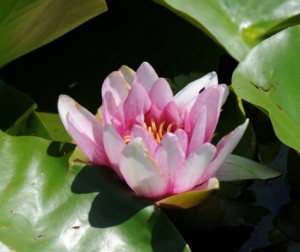 The water hazard at No. 14 is more decorative than threatening.

The back nine is newer than the front, and more muscular. It begins with an excellent par five over a long, rolling fairway and up to an elevated green. No. 11 is a funky, short par four with a blind tee shot that must be hit over a pole with red and white stripes, like a barber shop’s. The 14th has the course’s only water hazard, a pond that is more decorative than threatening. The last three holes are memorable. No. 16 is an uphill par four that turns sharply to the left. The second shot is partly blind and club selection is tricky. No. 17 is a par five with a green perched atop a hill; again, club selection is tricky because of the elevation change.  No. 18 doglegs to the right, and the tee shot has to be hit well if the player wants an approach to the green that’s clear of trees.

In my rating system, Golf Club Verona was a solid B. It’s got a few too many straight, pedestrian par fours to earn an A. But it’s a fun course in a beautiful setting.

Imagine, shall we, the perfect accommodation for a golfing sojourn in Italy. It would be a small inn with five guest rooms. The setting would be extraordinary. We’d place it next to a clear, swiftly flowing river that gurgles gently past the outdoor breakfast tables in the morning. A few hundred yards away would be a little village, regarded as one of the most a beautiful in Italy, full of cafes and restaurants. On the near horizon, just for effect, we’d place the ruins of a 14th-century castle. And we’d make the proprietor a former golf instructor who knows intimately all the courses in the area.

This is, in fact,  a description of La Finestra sul Fiume, a B&B on the edge of the town of Valeggio sul Mincio, about 15 miles west of Verona. La Finestra was once a farm, just upstream from the village of Borghetto. There was a farmhouse, two smaller dependent buildings, and a millrace diverted from the main channel of the river. In more recent years, it was the weekend home of a Veronese businessman. Five or six years ago, the businessman’s son, Pietro Gandini, and his wife Mattea, turned it into a B&B. They modernized the bedrooms and the baths, but they kept some of the ancient furnishings. The staircase in the main house, for instance, is built over portions of the old mill wheel and machinery. 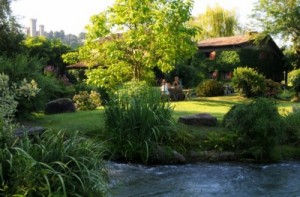 Each morning (the inn is closed during the winter months, which Pietro and Mattea spend in South Africa), breakfast of freshly-baked rolls, coffee and fresh fruit is served on small tables set on the lawn by the millrace or the river. Flowers bloom all around. One of the inn’s cats, or perhaps a family of swans, might amble by.

In the back, away from the river, Pietro has clipped the grass closely enough to make a short-game practice area. He might work on chipping and pitching with you. He’s happy to discuss the merits of the golf courses within driving distance. He may even join you for a round. He’s also a good source of information about local restaurants and wineries.

In short, La Finestra sul Fiume is more than a comfortable spot to sleep. It enhances an Italian golf vacation.

Off the Course: Opera

One need not be an opera connoisseur to enjoy this quintessential Italian art form in Verona. Just go during the summer opera festival at a 2,000-year-old Roman arena on the city’s Piazza Bra. Take in the spectacle.

The arena in Verona might have held 40,000 spectators for circuses and gladiator combat during the prime of the Roman Empire. Set up for an opera in 2010, it holds perhaps half that number. The audience fills half the bowl. The opera occupies the other half.

To fill such a space, the opera must have, in addition to the requisite tenors and sopranos, a lavish set and a cast of dozens of supernumeraries. The set for Verdi’s “Aida,” one of four operas presented during the 2010 festival, was a stylized, golden pyramid that revolved to show different facades and enormous likenesses of Egyptian gods. Hordes of spear-bearing extras fanned out to stand in the empty tiers of seats above the stage. 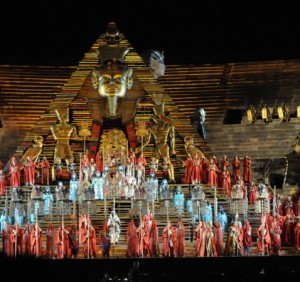 The acoustics in the arena are such that the singers can be heard without microphones. All an audience member needs is the suspension of disbelief required to imagine passion between the lithe soprano playing the title role and the portly tenor whom she is supposed to love. No acoustics can help with that.

Even in the heat of mid-summer at an outdoor performance, an evening at the opera can be an elegant occasion for the Veronese. Women wear black couture dresses and heels. Men put on imaginative combinations of jackets, trousers and neckties. Such an occasion demands more than a trattoria meal, pleasant as that can be. Verona has just the spot: Il Desco.

The cuisine at Il Desco is, of course, Italian. But it’s a very modern, stylish, creative Italian with a tremendous emphasis on the presentation of each course. The visual tone is established immediately. The diner is seated in a room lined with dark wooden paneling and decorated with bold, abstract paintings. A complimentary glass of sparkling wine arrives with the menu.

The first course for what’s billed as a traditional Veronese meal might be a flan with wafer-thin slices of zucchini, mussels and baby shrimp, nestled in a subtle broth. Then might come a bean soup with pasta and a single, perfectly cooked oyster, followed by gnocchi with snails and garlic and a braised beef cheek so tender that the cooking might have started in the 19th century. Dessert might be a plate of artfully composed fruit and a bit of ice cream, or a strawberry tiramisu. The service is impeccably polite and efficient.

Il Desco might not be a place you’d choose (or could afford) to eat in every night. But for a special occasion, it’s superb.