With a night to consider the evidence that I was an abjectly inept, incompetent poker player, I came to the only logical conclusion about the next step in my quest to pay for golf by winning at cards. I would play for higher stakes. After all, if you’re going to finish last in poker tournaments with a $50 buy in, why not step up in class and lose to a better group of players?

That meant driving about eight miles, crossing Connecticut’s Thames River and entering the Friday afternoon $200 buy-in event at Mohegan Sun,  the Ford to Foxwoods’  Chevy. And it gave me a chance to play a morning round at the Mohegan Sun Country Club at Pautipaug, a mouthful of a name with a story behind it.

One of the business departments at any big casino is called “Player Development.” This is a polite way of saying that casinos want to cultivate high rollers who will come often and, over time, enrich the casino. Among the most useful items in a casino’s player development toolbox is a golf course. If you have a golf course, you have a place to amuse high rollers. You have a place to hold a big celebrity pro-am where your prospective high rollers can be put in the same foursome as, say, Ahmad Rahshad, or Charles Barkley. High rollers are known to like this sort of thing. 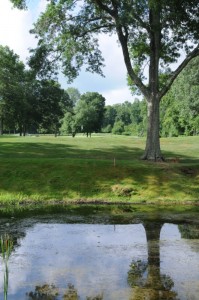 So when Foxwoods opened its spectacular Lake of Isles complex in 2005, it behooved the rival tribe down the road to keep up with the Joneses. There was only one problem. The only big, available piece of land in the Uncasville, CT region was a tract that housed a defunct state mental institution.  But the cost to clean up that site, fouled by things like oil and asbestos, was prohibitive. The Mohegans needed a Plan B.

Enter Pautipaug Country Club. Pautipaug was a modest, pastoral club, founded by a group of local doctors in 1960. Geoffrey Cornish, the designer of many solid New England layouts, laid out the holes on a former farm. It was and is a little gem of a golf course, a place where foursomes that have played together for decades gather on a summer morning, some walking, some pulling hand carts, having a grand time.

It’s too bad, in fact, that more courses don’t share Pautipaug’s virtues. Its fairways always provide a good lie. Its “push-up” greens (named for the inexpensive method with which they were built) don’t feature any roller coaster curves but do roll fast and true and do impel the player to stay below the hole. At 6668 yards from the back tees, Pautipaug doesn’t overwhelm anyone with its length, but still rewards accurate power on a number of holes. It’s a great walking course, with short traverses from the greens to the tees and only a couple of steep slopes. It’s pretty and parklike, with a several ponds and creeks and a lot of mature hardwoods. At $100 a round ($80 for hotel guests) the green fees won’t bankrupt anyone.

Pautipaug’s got one of the quirkier 538-yard closing holes in golf. The second shot on 18 has to negotiate two little ponds, lined with cattails, that sit on the left and right sides of the fairway, beginning about 200 yards from the green. There’s an alley of fairway grass about 15 yards wide between the two ponds, and there are flagpoles on the inner edges of the ponds. To the player, they look almost like goalposts on a football field. Long hitters can just aim over the ponds and carry them. Average hitters have two options—lay up and have a long fairway wood into the green or try for a “field goal” between the posts, going between the ponds.

Despite its charm, Pautipaug, about 12 miles from Mohegan Sun, was having financial difficulties a few years ago. So a deal was struck. Mohegan Sun bought the club. The old members had the option of continuing to purchase annual memberships. And the casino had itself a golf course. 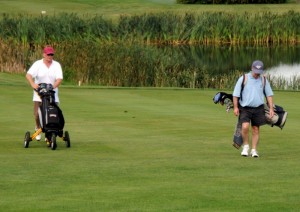 Final Rounds: Coming up No. 18 a few weeks before Pautipaug closed for renovation.

I’m not sure the casino fully appreciates what it has. The link to the course is hard to find on the Mohegan Sun web site. Pautipaug is on a back country road, but there are no signs helping travelers find it. In fact, the casino plans to shut the course down in August, 2010 for renovations. The blueprints include new irrigation and drainage systems and a re-design of a couple of holes. The course won’t reopen until 2012.

I hope the renovation doesn’t sacrifice any of Pautipaug’s virtues. I rated the course a B+, just a smidgen shy of an A. (To read about how I rate golf courses, click here.) If Foxwoods has a Brazilian supermodel, tempestuous and alluring, in its Lake of Isles courses, Mohegan Sun has the girl next door–solid, charming and easy to live with.

The Poker: Casino of the Winds

The Mohegan Sun complex looks, from a distance, as if it might have been erected by the same visitors from space who erected the black monoliths in Stanley Kubrick’s  2001: A Space Odyssey. The hotel is a set of stark, reflective glass and steel towers with trapezoidal lines. They dominate the green trees and blue water of the once-placid and rural Thames River. There are so many acres of casino space within that the place is like a labyrinth. There are “Lost Guest” desks where staff members will help bewildered gamblers figure out in which garage they left their cars and how to find their way back to them.

For the $200 buy-in at its Friday afternoon tournament, in a corner of the labyrinth called the Casino of the Winds, Mohegan Sun provides a stack of 20,000 “dollars” in chips. I was assigned seat eight at Table Two. The field had 99 players, meaning a prize pool of more than $15,000 real dollars, with $6,000 or so paid out to the winner and even the 9th place finisher taking $520.

For a while, it looked as if Table Two was a lucky table for me. I even laid a beating on a couple of people. One was a little black lady with a lilting Caribbean accent, who stubbornly stayed with me when I had a flush in spades. That cost her about 10,000 chips. Another was a black guy with a heavy gold chain around his neck, and little tokens of luck in his hands. He had a little toy car and a small metal statuette that looked like a Buddha which he put on his hole cards for luck. They didn’t work.

Most of the time, as players filtered in and out of Table Two, it was just us white guys. There were guys in flip-flops who seemed to be in their twenties. There were guys with shaved heads, sunglasses, and earphones. There were old guys in Red Sox hats who seemed barely able to hold their heads erect until they raked in some chips. The guy on my right, sporting a fairly obvious gray toupee, told me about the knee replacement surgery he was scheduled to have the following week. Next to him was a guy I will call Donnie, who must have weighed about 500 pounds. He wore steel rim glasses on his shaven head and he arrived on one of the motorized indoor scooters the casinos provide for the customers who can’t walk too well. He pushed his belly up to the edge of the table, sat down, and almost immediately beckoned to the house masseuse, who happened to be walking by, offering seated massages. Donnie pulled the tails of his shirt upward, and for a horrifying moment, I thought he was going to strip to the waist. Fortunately, he had an undershirt on.

As the masseuse kneaded his doughy body, Donnie somehow turned the conversation that flows intermittently around a poker table to politics. He wanted the immigrants to go back to where they came from. Heads around the table nodded in agreement. “You don’t ever read the truth about the Arizona immigration law in the newspapers,” offered the man in the gray toupee.

“The Greatest Generation was our greatest generation,” Donnie opined. “You want to know why?”

It didn’t seem that I had much choice. I shrugged.

“Because they manufactured things,” Donnie answered his own question. “America doesn’t manufacture things anymore.” It was hard to imagine Donnie holding down an assembly line job in his physical condition, so presumably he didn’t mean that he himself wanted to work in a factory. But he wanted other people to do so, as long as they were native-born, real Americans. More heads nodded.

The country was going to hell. More nods.

Happily, so was Donnie’s chip stack. He had a proclivity for chasing straights and flushes that didn’t materialize, a proclivity that violated one of the fundamental tenets of the poker table: “Only dogs chase.” A couple of hours into the tournament, Donnie went all in and lost. He pushed himself away from the table, got back on his scooter, and trundled away. He would be home in time to catch The O’Reilly Factor on Fox News. 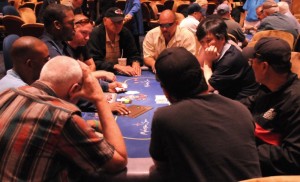 Bearing down in the poker room at Mohegan Sun

After a couple of hours trying to follow the Doyle Brunson dictum to play only a few hands, but play them aggressively, I had nearly doubled my initial stack. Had I not been playing in a tournament, I could have cashed in and achieved the goal of paying for my golf with my poker winnings. But in a tournament, there’s no walking away.

In a tournament, there can also come a time when you can’t play conservatively any more. As the hours went by, my chip stack was being eaten away by ever-rising antes and blind bets. I kept an eye on the TV monitors that showed how many players were left from the original 99. It went down to 60, then 50, then 40, then 30. But as the number of players dwindled, the chip stacks of the ones who were left grew proportionately. The betting got higher. Early on, a bet of $3,000 in chips meant something. After six hours, it was just the big blind. My stack of about $35,000 was one of the smallest left in the tournament. I realized that to make it to the final table, I was going to have to pick a likely hand, bet it big, and hope that it won.

Inevitably, that was the time I saw a seemingly endless skein of sevens and threes when I looked at my cards. My stack, once so robust, kept dwindling. So when I looked down and saw the ace of hearts and deuce of diamonds, I decided the moment had come. I bet $15,000. A guy to my left responded by going all in. I had little choice but to call. Folding would have left me with an unsustainably small stack of chips.

I turned over my ace-deuce. He turned over two aces. My only hope was a straight, and though the flop turned over a four and a five, no three made an appearance.

As I walked out, I looked at the TV monitor. I had played for six hours and finished 20th, winning nothing. I’d been more efficient the night before, when it only took me fifteen minutes to win nothing.

Still, the casino at Mohegan Sun earned an A. The staff was polite and efficient. Someone even helped me find my garage.

Perhaps, I thought as I drove away, I needed a new strategy.

3 Responses to “In Search of a Golf-Poker Parlay III: Mohegan Sun”