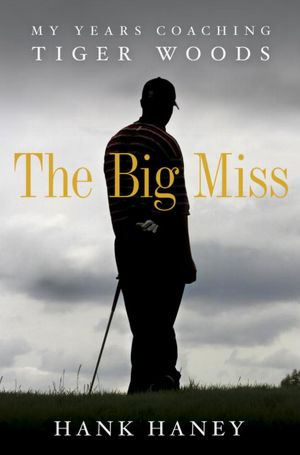 Someday, someone is going to do a great biography of Tiger Woods. It will be a tragedy on a level with King Lear. It will feature a character as quintessentially American as Jay Gatsby. And it will end, I suspect, as dolefully as Citizen Kane. It will be an American classic. Tiger’s life is that rich, that fraught with potential, that sad.

The biography that finally nails Tiger in all his glorious and wretched humanity won’t be done for a while, perhaps not till Tiger is dead.  While he’s alive, the people around him, the ones who each know a piece of the story, will be, for the most part, silent for fear of offending him. Tiger’s certainly too practiced a liar to expect him to come clean in the autobiography he’ll doubtless produce when the money to be made becomes sufficiently convincing.   But after he’s gone, as archives and courthouse files open up, as those who survive him tell their tales, a great work will be done. When it is, Hank Haney’s The Big Miss will be important source material.

Haney’s story is carefully limited. It’s neither his own nor Tiger’s life history. It is, instead, a memoir of his relationship with Tiger, from a nodding acquaintance when Tiger was a junior golfer to six years as his swing coach, from 2004 to 2010. He steers clear of some of the lurid aspects of that period, particularly Tiger’s serial philandering. Haney says he wasn’t there and he didn’t know. Given the cold self-absorbtion that apparently passes for friendship from Tiger, that seems entirely plausible. Tiger needed Haney for swing advice, and that was where their friendship started and ended.

But within that relationship of coach and client lie some of the keys to the epic tragedy that is Tiger Woods.  A few of them were picked up in the excerpt that Golf Digest featured. Haney describes Tiger’s obsession with the Navy SEALs and indicates that some of the injuries that have damaged his golf career came during SEAL training exercises that Tiger never disclosed to the public. Haney shows how the death of Earl Woods coincided with the beginning of both these military misadventures and the philandering.

It’s one of the fascinating contrasts between Tiger and Jack Nicklaus, whose record in the major championships Tiger is trying to surpass. Both lost their fathers at about the same point in their careers. But they reacted differently. Jack has stated that when his father died, he was in a fallow competitive period, having won nothing of consequence for several years. He vowed to rededicate himself and make his father proud. Tiger was at the top of the golf world when his father died. Tiger went off the rails.

Haney gives some other useful insights into his erstwhile client. (Not the least of them: Tiger was stingy enough to pay Haney a paltry $50,000 per year to be at his beck and call and arrogant enough to neglect to make Haney sign a non-disclosure agreement.) Haney goes into detail about the reasons for Tiger’s almost inexplicable desire to overhaul his swing, something he has done three times in his 15 years as a professional. Mere mortals might have been content to try to maintain the swing the mechanics Tiger had in 2000. Haney relates that to Tiger, “maintain” is a revolting term. In part, Haney writes, Tiger wanted to smooth out the flaw that sometimes, even in his best years, led to his “getting stuck” and spraying his tee shots. In later years, he needed to change his swing to reduce the stress on knees that were wearing out. But it’s also true that it’s hard to practice as many hours as Tiger practiced, hitting as many balls as Tiger hit, while just trying to repeat the same motion. He needed something to work on, something to change, if only to avoid going out of his mind from boredom. That segment of the future biography that dissects Tiger’s swing and its changes will be based in part on what Haney says here.

So will the parts that attempt to capture Tiger’s personality. It is, as Haney documents, cold and self-centered. Tiger either doesn’t know or doesn’t care about the small courtesies and pleasantries that most of us understand are part of a relationship. He wants what he wants when he wants it. Otherwise, don’t call him. He’ll call you when he needs you. The people in his life seem to be confined to functional compartments–coach in one, agent in another, caddie in another, wife in another.

Haney doesn’t know whether this is the way Tiger has always been, or whether this is the personality his talent and celebrity have imposed upon him. One can theorize that a happy, normal little boy slowly developed into the unpleasant, self-absorbed man because of the way the world, beginning with his parents, responded to his gifts. Maybe if he’d lost a limb in a car wreck at the age of eight and never played golf again, he’d be a nice guy to hang around with today. Maybe part of genius in any intensely competitive, individual field is a lack of empathy. (See Fisher, Bobby.)  Haney, to his credit, doesn’t speculate. He sticks with what he knows as he sticks it to Tiger.

And there is more than a bit of vindictiveness. Haney closes the book by saying that he appreciated the chance to work with Tiger and wishes him well. But the book’s too full of nasty little Tiger vignettes for that to be credible. Haney recounts in detail how Tiger would sit and play video games or watch TV on nights when Haney was staying in his house at Isleworth, disdaining conversation once they had left the practice range. Occasionally, he would get up, go to the fridge and get himself an ice pop. He never offered Haney one and Haney was too intimidated by Tiger’s self-absorption to ask. One can imagine Haney relating this story to his ghostwriter, Jaime Diaz, and grinning a tight little grin when he thinks about Tiger reading it.

He gives a multitude of reasons to think Tiger will not surpass the Nicklaus record of 18 majors. There’s his health. There’s the persistent problem with the driver. There’s the new problem with the putter.  And according to Haney, there’s a problem with desire. Tiger used to out-work everyone. He doesn’t any longer. As Haney notes, it’s rare that a golfer in his mid-30s can overcome these kinds of problems. And, as Haney says, Tiger has been competing at golf since he was a very small boy. Right now, he’s 36. But it’s an old 36.

If Haney’s right, it’s likely that eventual definitive biography will be written as an Icarus-like tragedy, the story of a boy with great gifts and fatal flaws, for a while the greatest golfer the world has ever seen–but, ultimately, a failure.