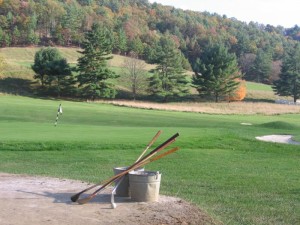 The view from Oakhurst's 6th tee.

A living relic of American golf  history is in danger, and none of the guardians of the game are stepping up to save it.

I am speaking of Oakhurst Links in White Sulphur Springs, WV. First built in 1884, Oakhurst  makes a convincing claim to being the United States’ oldest golf course, as well as the site of its first tournaments and its first clubmaking activity.  But it may soon be subdivided and lost.

The Oakhurst story begins some 130 years ago, when a Bostonian named Russell Montague bought its 30 acres of hilly land and decided to build a golf course to entertain friends visiting from Scotland. The golfers played with gutta percha balls and wood-shafted clubs imported from the cradle of the game.

Montague and his friends were undoubtedly pioneers. The United States Golf Association does not officially recognize a first, or oldest, course in America. Its history of American golf cites evidence that people in Charleston, S.C. played the game in the 1780s, though no trace of their course remains. The Royal Montreal Golf Club was chartered in 1873, accounting for the oldest North American club. The oldest continuously operating American club is the St. Andrews Club in Hastings-on-Hudson, NY, founded in 1888. But it does not play on its original course. The oldest 18-hole course in America is the Chicago Golf Club, built in 1891. But its course has been expanded and changed many times over the years. Oakhurst is the best example we have of what golf looked like and played like in its American infancy.

Oakhurst is not more renowned because it did not operate continuously after its founding. Indeed, it almost disappeared. The little club was run by Montague and his friends for 26 years or so, until newer, livelier golf balls made the course too small. When newer, longer courses opened at the nearby Greenbrier Hotel Oakhurst seemed both obsolete and unnecessary.  The course reverted to pasture.

Lewis Keller, a golfer and businessman, bought the Oakhurst property in 1959 after his friend, Greenbrier pro Sam Snead, tipped him to its historical importance and availability. Keller raised horses on the property at first, but as he tromped and rode around it, he could see the fading outlines of old tees and greens. Finally, in the 1990s, he enlisted the help of golf architect Bob Cupp. Cupp carefully surveyed the property and rediscovered its nine original holes. They were restored to golf use in 1994.

Keller and Cupp tried to make the course look and play just as it had in 1884. The tees were bare, flat patches of dirt. There was a bucket of sand and a bucket of water, and players had to create little tees of wet sand to get started. Their implements were replica gutta percha balls and replica 19th-century hickory clubs that Keller had made in Scotland. A flock of sheep, rather than mowers, tended to the fairways. The nine-hole course began near Montague’s old farmhouse and followed the natural contours of the property down into a valley and back up to the house. It measured about 2,000 yards.

That was plenty long enough, given the balls and clubs. A player used to graphite shafts and titanium clubheads had to discipline himself to swing easily. If he did, and the ball made contact with the tiny wooden head of the replica driver, he would hear a “thonk,” and the ball might go 150 yards. Mishit it only slightly and it would either go nowhere or slice into the long, fescue rough.  Playing Oakhurst was like getting into a horseless carriage from the 1890s and taking it for a spin.

For a dozen years or so, Keller operated the restored Oakhurst Links as a hobby. He had a small museum. For $75 you could rent the replica clubs and play. Business was not great. When I played it, in 2005, I was the only one on the course.  For the last few years, the course has been open only by appointment. Its annual moment in the sun comes each spring when the national hickory club championship is played there. 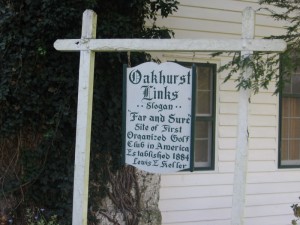 The oldest extant golf course in the United States.

Lew Keller is well into his 80s now. His wife died a while ago, and he wants to move to be near his children, none of whom live in West Virginia. Last year, he put the property up for sale at $4.5 million, hoping that someone who loved golf would buy it and preserve it. No one did.

“It’s a sad thing,” says Linda Brandt, the realtor who is marketing the property.  “It could be bought and broken up for housing lots.”

In a sport that honors its history and traditions as much as golf does, that would be worse than sad. It would be like letting Independence Hall be razed and the Liberty Bell melted down. It would be a tragedy.

3 Responses to “A Threatened Piece of Golf History”