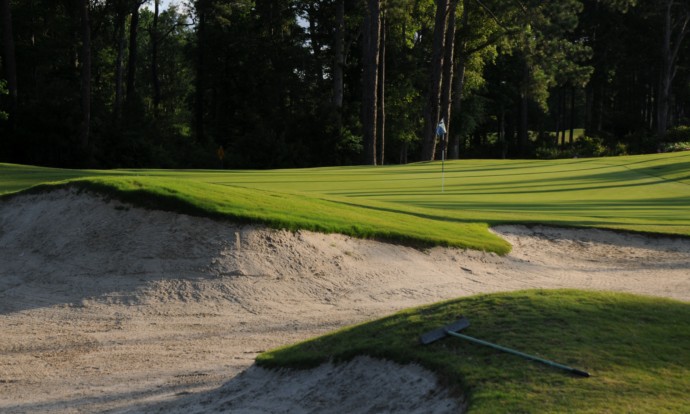 The green on the par-five 4th at Kilmarlic

Vacationing golfers on the Outer Banks have a big initial choice to make. Do they play on one of the four courses of the oceanside barrier island? Or do they take the Highway 158 bridge to the mainland in search of roomier fairways, lower green fees and smaller crowds? 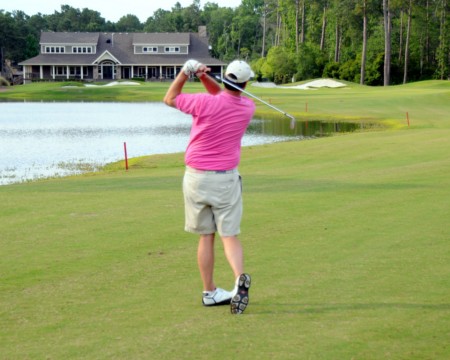 Risk and reward on the par-five 18th

Kilmarlic Golf Club, in Powells Point, NC, about five miles from the bridge to Kitty Hawk, makes an argument for the mainland.

Opened in 2002, Kilmarlic occupies a big tract of land. It’s carved through pine woods and bogs. There may one day be housing around more of its holes, but at the moment playing is almost a wilderness experience. Every hole is framed by trees and 15 of the 18, by my count, feature water, a marsh, or both. The par fives are all risk-reward holes, with significant penalties for the big hitter who gets reckless.

Tom Steele, a landscape architect from southern Virginia, did the layout; he’s designed only one other course, The Nansemond River Golf Club in Suffolk, VA, which opened in 1999. Maybe the Great Recession explains why he hasn’t been more profilic. Based on the evidence at Kilmarlic, he’s got some chops as an architect.

I liked the 14th, a drivable par four that plays only 308 yards from the back markers. The tee shot needs to avoid some fairway bunkers directly in the line of play from tee to green. But what makes the hole interesting is its Biarritz green, with a high front, high back, and a trough in the middle. Beyond the green is water, so the player looking for a birdie when the hole is on the back shelf needs to be very precise, or he could face a difficult up-and-down challenge to save bogey. 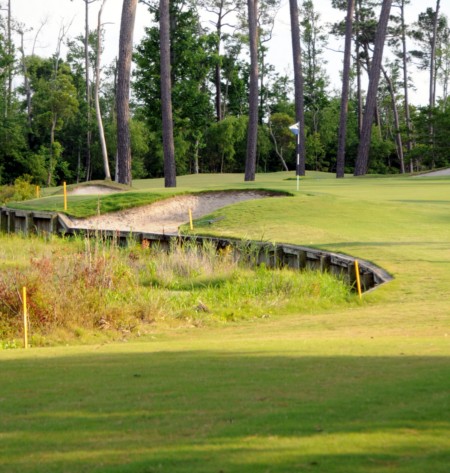 The tee shot at the 17th must carry a swamp

Another hole based on classic design principles is the 18th, a par five that plays 495 yards from the back tees. A long drive leaves the player with two options. He can hit an iron safely down the fairway to set up a pitch to the green. Or he can gamble by going directly for the green–entirely over water.

Sometimes, as I played, I thought Steele was a bit carried away with the blank canvas presented by several hundred acres of available land. The par-five 12th, at 495 yards, is shaped like the letter C, inviting the player to hit a long fade off the tee and go for the green in two. Woods and marsh occupy the interior of the C, but I suspect that if Bubba Watson were to play Kilmarlic, he would ignore the fairway, tee it up high and try to hit the tee shot over the gunch directly to the green. He might make a two-putt eagle.

I can’t report reliably on the course conditions a player will encounter. When I played, in early June, the greens had recently been aerified, and they were bumpy. A lot of rain had fallen in the previous week, and the sand in some bunkers had washed out, leaving essentially a dirt lie. Fairway lies were patchy in places. But the course has hosted two North Carolina Opens, and it holds an annual college tournament, the ODU-OBX Intercollegiate, in the autumn. That suggests that Kilmarlic can be put into pristine condition. 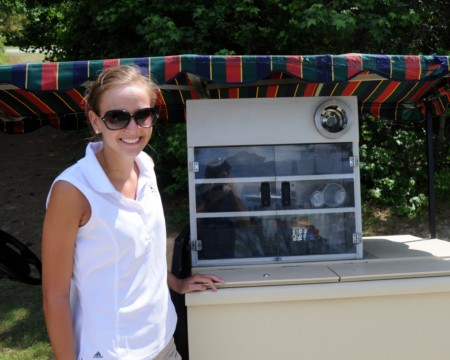 Be nice to Jackie and she may share her bug spray.

Regardless of the course conditions, players on Kilmarlic need a good insect repellent as much as an extra sleeve of golf balls. The flies and mosquitoes owned the land long before there was a golf course on it, and they’ll feed hungrily on unprotected skin. If you forget your bug spray, tip the beverage cart girl generously when you buy a drink. Ask her if she can spare some of hers.

Kilmarlic has some attractive rates. The high-season rack-rate green fee is $99, and there are lots of packages available that can reduce the cost of a round to a little more than half that number. There is also a lodging option, Kilmarlic Cottage, steps from the first tee. It’s designed to accommodate an eight-person buddy trip, and it does so luxuriously.