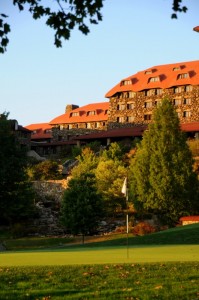 If only F. Scott Fitzgerald were still alive. He might be able to tell us how closely the golf course at the Grove Park Inn, on the slopes of Sunset Mountain in Asheville, North Carolina, resembles the layout Donald Ross put together in 1926.

There are only three problems with this approach. For one, Fitzgerald, who stayed at the inn for a couple of summer seasons in the 1930s, has been dead for seventy years. For another, Fitzgerald’s interest in golf never went beyond what he had to know to use it as a vehicle for pointing out the foibles of the leisure class. Finally, when Fitzgerald stayed at the inn, a Southern landmark since 1912, he didn’t want a view of the golf course. His fourth floor room, marked by a small plaque, afforded him a view of the entrance drive, where he could spot the season’s choicest debutantes and demi-mondaines as they walked in the front door.

So we don’t know if Fitzgerald actually saw Ross’s course. Nor do we know what Ross’s course looked like. We know that the Grove Park Inn layout was re-done in 2002 by Kris Spence, a Greensboro, NC, architect who specializes in restoring old Ross courses in the Carolinas. And we know that the inn has made the course into a Ross shrine. There’s a statue of the bespectacled Scot outside the pro shop; it looks a little like Mohandas K. Gandhi in a tweed newsboy’s cap. All around the layout are little bronze plaques with quotes lifted from Ross’s 1930 book, Golf Has Never Failed Me. 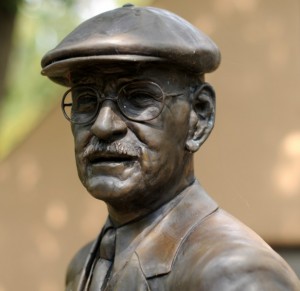 A shrine to Donald Ross

Just beyond the back bunker at the eighth green, for example, there’s a plaque that says, “There is no such thing as a misplaced bunker. Regardless of where a bunker may be, it is the business of the player to avoid it.” Dour wisdom, indeed.

But if Ross left any plans that might have guided Spence in his restoration, the hotel long ago lost them. And there had been plenty of hands laid on the layout in the decades since Ross left Asheville.

Michael Fay, captain of the Donald Ross Society, whose mission is it to safeguard Ross’s work, first visited in 1998 and could only play 11 holes before driving in, disgusted. “It could well have been the worst Ross course I ever saw,” Fay wrote me recently. “There wasn’t much Ross left. The course was the resort’s red-headed step-child and had given up pieces of land to parking lots and tennis courts over the years. It was reconfigured by a number of untalented architects, leaving it truly bereft of Ross features, not to mention golf values.”

Fay’s assessment was one of the reasons the resort decided to hire Spence and pay for a restoration.

The layout Spence put together has some definite Ross touches. Ross liked to lay out par fours with the tees and greens on high ground and the fairway in the low ground in between. This gave the player an enjoyable downhill tee shot and a challenging uphill approach. The 18th  at the  Grove Park Inn is a good example of this style. 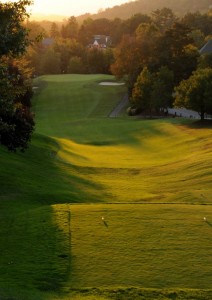 Ross was artful in his use of creeks and ponds. He laid out his holes in such a way that the average player could avoid them simply by hitting average shots. The hazards swallowed up only terrible shots or risky shots gone awry. Spence observed this principle in his renovation. He turned a pond in front of the green on the par five third into a creek set about ten yards short of the putting surface. The average player needs only to lay up and hit a reasonable pitch to avoid it. The creek mainly threatens the good player who wants to reach the green in two.

Spence did a good job imagining how Ross might have built greens and he took advantage of nearly every hill and swale the property offered. He created an excellent and tricky short par four, the 13th, which plays uphill to a green with severe slopes unseen from the fairway.

There are some things Spence couldn’t fix. There’s not really enough land for an 18-hole course. Several holes are snug against property fences, and a slightly mishit shot can hit a house or a parked car. There’s no practice range. The 17th hole is wedged into the property. The tee is practically on the terrace of an abandoned stone house, and the green for that hole sits in the shadow of a modern wing of the inn.

But, overall, it’s a very well-conditioned, tight, sporty layout. Barack Obama liked it well enough to play it twice when he took a brief vacation at the inn in April, 2010. Michael Fay likes the new course. Spence, Fay wrote, “did an exceptional job of engineering a reasonably Ross-sympathetic design on a tiny property. It’s a good test.” As a bonus, there are lovely views of the Blue Ridge as the sun sets. Wild turkeys sometimes gambol along the fairways.

I give it a B+ (To see how I rate golf courses, click here.) 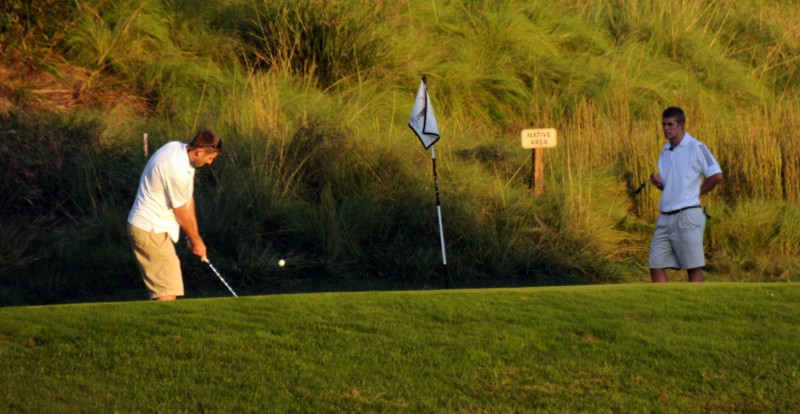 Chipping on the 16th green