Playing golf on the La Iguana course in Playa Herradura, Costa Rica is like listening to a violin recital by a five-year-old. Close your eyes and you’re not going to mistake the kid for Jascha Heifetz. But with your eyes open, you’ve got to admit that it’s remarkable someone that size can even lift a violin, much less produce music on it. 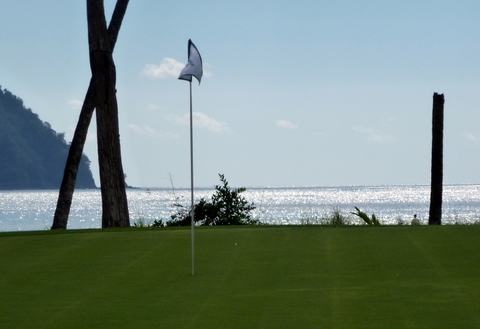 It’s located on the edge of the Pacific, in a place where the land abruptly meets the sea. Just a little ways from a beach the color of coffee grounds, the terrain becomes steeply mountainous; the mountains, by nature, are covered with thick, tropical forest. It’s a place that wants to support an infinite variety of aggressive plants and animals. It’s  not a place that’s naturally hospitable to a golf course, which by definition involves planting and nurturing turf grass and keeping nearly everything else at bay.

But Costa Rica, by virtue of its warm weather, friendly people and dazzling natural resources, has become an increasingly popular winter destination for Yanks who want something a bit less spoiled and more exotic than Sarasota or Scottsdale.   And where large numbers of North American (and European) tourists go, three things are likely to follow: golf,  condominiums and the Marriott Corporation.

La Iguana is the centerpiece of precisely this resort triad. There’s a big Marriott hotel, the Los Suenos Resort. There are condominiums lining several of the golf holes, with lots of land to build more if the economy ever recovers. The golf course exists to draw customers to the hotel and buyers to the condominiums.

It’s all part of an enclave separated by gate and fence from the country surrounding it. Down the road a few miles is the beach town of Jaco, which can be either charming or sleazy, depending on the visitor’s opinion of things like backpackers, surfers, loose joints and  beachside biker bars. Closer to the resort gates, Playa Herradura has a couple of good open-air restaurants, a shopping center for the gringos, and a fair number of folks who pitch tents and camp on the beach. Inside the walls, it might be Palm Springs. 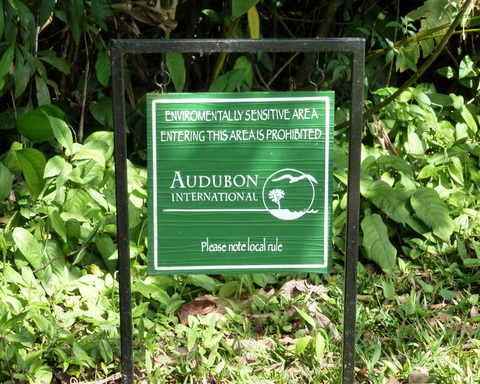 You're not allowed to go into the woods, but why would you want to?

The golf course, designed by Ted Robinson, Jr., had to be fitted between condos, the hotel, the beach and the mountains. The first four holes climb steadily through a narrow valley that was once covered in forest. The next five holes turn around and head back. Robinson built a double green to serve both No. 3, going up, and No. 5, coming back down. The second nine has two loops. Nos. 10-14 go up and back a neighboring valley to the front nine’s. The last four holes are on flat land near the beach. The green at No. 17 offers a view out to sea.

The course isn’t easy. According to the scorecard, it’s rated at 73.4 with a slope of 145 from the back tees, which play to 6,698 yards. I’m not sure of the provenance of that rating, but the challenge at La Iguana is formidable. Though Robinson carved out ample playing corridors, the penalty for straying from them is severe. A ball in the woods is gone. There are Audubon sanctuary signs asking players to keep out of the woods, but they hardly matter. A player is more likely to find a foraging coati than a lost ball. On most holes, there isn’t a lot of strategy. Just hit the ball straight.

The pleasure of playing such a layout comes in part from the natural elements that impinge on it. Woodpeckers and hummingbirds with irridescent green plumage flit by. Birds squawk in the woods as if they were criticizing an errant shot. The course’s namesake iguanas bask in the sun by the 16th hole.

But with the tropical setting come some limits. The turf is a common, slightly scraggly Bermuda. The greens are coarse and grainy. A couple of them show signs that it’s not easy maintaining short grass in the shadows of a rain forest. One hole, the first, was closed when I played, because the green area was being re-built. Players were advised to start on the back nine, then bypass No. 1, giving themselves a par five for the inconvenience. 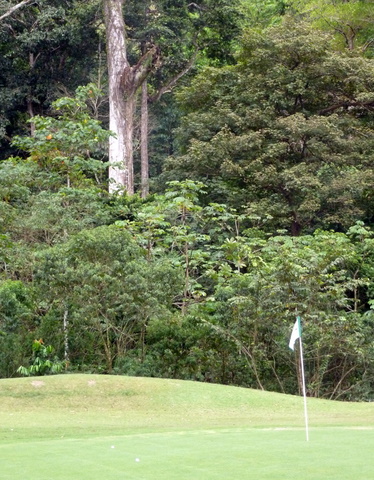 The fourth green, in the shadow of the rain forest

The staff at La Iguana does a good job with the amenities–cleaning clubs, proffering iced towels, delivering sandwiches to order on the course. But the golf carts are equipped with the most annoying GPS system I have encountered. It’s not content with providing the standard visual of yardages and hole locations. It’s also got an anodyne voice that turns itself on as the cart glides up to each hole and puts exactly the wrong thoughts into the player’s head. “Don’t hit it out of bounds on the left, or into the lake on the right,” the voice might say. Or, “This is a difficult hole.” Or “This is a tough par three with bunkers surrounding the green.”

Though I looked, there did not appear to be an off switch for this voice. If it had been a caddie, I’d have fired him.

When I evaluate courses in exotic and scenic locations, I try to apply what I call “the Kansas test,” as in, “If Pebble Beach were in the middle of Kansas, with wheat fields replacing the Pacific Ocean, what would people think of it?” Based on the Kansas test, I’d have to say La Iguana is decent, but not extraordinary.

Then again, Costa Rica is not Kansas. You can play golf at La Iguana, then take a hike through a tropical forest and see a scarlet macaw. You can watch the sun set over the Pacific from an open air restaurant with fresh, delicious seafood. In those circumstances, hanging around and playing another round or two at La Iguana begins to seem much more appealing.