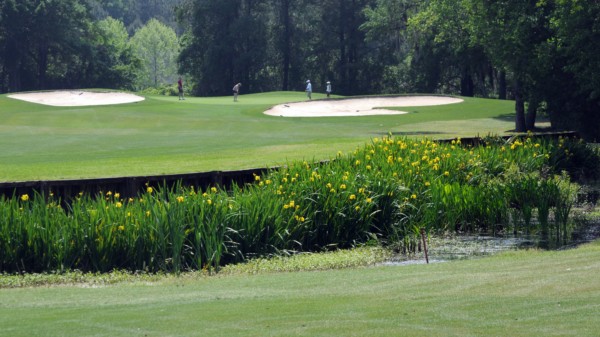 Irises beautify a hazard bisecting the 15th fairway at Willbrook.

Some time ago, the now-defunct magazine Golf for Women published an article called “The 50 Top Golf Courses for Women.” Willbrook Plantation in Litchfield Beach, S.C. made the list. Ever since, the course has proudly used the distinction in its marketing. So when I played there recently, I was curious. What makes a course hospitable to women?

At first glance, the virtues of Willbrook seem gender-neutral. It is an interesting but manageable challenge, not overwhelmingly long. The conditioning is good. Lots of water hazards, lots of bulldozed, gumdrop contours. Live oaks and Spanish moss. A good, though not especially spacious, range and practice area. Willbrook has some lovely flowers, but so do a lot of courses. I don’t think that’s the secret. Neither do I think it’s the alligator that we saw patrolling the edge of the pond that runs down the right side of No. 2. My female playing companions kept a very respectful distance.

My wife, who played with me, noticed one female-friendly touch immediately. “They don’t just walk 20 yards up from the men’s tee and stick a red marker in the ground,” she said. Indeed, the red tees at Willbrook, which play to 4981 yards as opposed to the back-tee distance of 6722, seem to have been thoughtfully placed by architect Dan Maples. 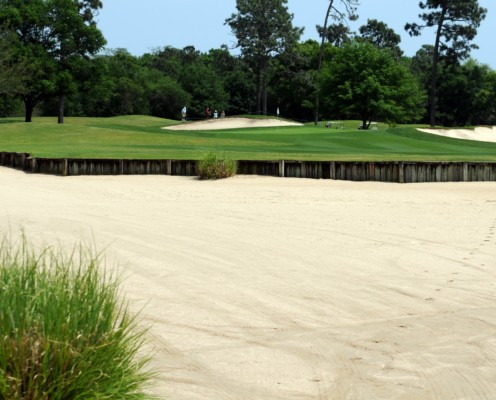 Women don't have to carry this waste bunker on the par-three 12th.

On the par three 12th, for instance, the shot from the men’s tees has to carry a big, sandy waste area. From the back tee, at 199 yards, the carry is probably 140 yards. The red tee is placed well ahead, 110 yards from the middle of the green. It’s set to the left, so the carry over the waste area is negligible.

But Maples didn’t reflexively deprive women of the thrill of managing a forced carry. At the 383-yard, par-four 5th hole, the tee shot must carry a cove in a pond.  The carry is maybe 100 yards from the back tee. The red tee, 332 yards from the green, is set on a small peninsula that juts into the hazard. The carry is perhaps 50 yards. My wife hit a low pull off the tee, but it found dry land and she raised her arms like a triumphant boxer.

Perhaps not coincidentally, there were women all around us as we played. The foursome ahead had two couples. A twosome of women, Linda and Cindy, caught up with us and joined us as we waited on our 8th hole. They were schoolteachers from Myrtle Beach, and I asked them why they had chosen Willbrook.

Myrtle Beach National has a lot of courses. Why Willbrook? I asked. Linda said she had worked at Willbrook after moving to the Grand Strand years ago, first driving a beverage cart and then as a starter. She grew to like the place.

That seemed significant to me. Willbrook had allowed a woman to rise from a stereotypical role to a role usually filled by a male. That bespeaks an attitude, and I suggest that attitude is what  makes Willbrook a female-friendly golf course.  Women can tell that they’re welcome at Willbrook. They respond by coming out in numbers. 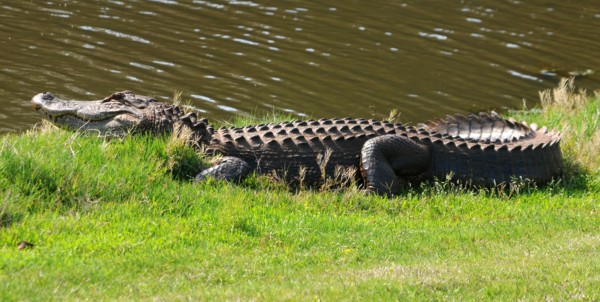 Not one of the female-friendly features at Willbrook: The gator on No. 2.

2 Responses to “Willbrook: What Makes a Course Female-Friendly?”