A birdie putt on No. 15 with seabirds and Pacific breakers as a backdrop.

A golfer at Costa Rica’s Hacienda Pinilla should expect surprises. There might be a howler monkey bellowing in a big tree overhanging the 9th tee. There might be cowboys rounding up cattle in a bit of ranchland between the 12th green and the 13th tee. But the biggest surprise is likely to be the wind. For some reason, Hacienda Pinilla is one of the windiest courses I’ve seen outside of Scotland or Ireland.
The wind made its presence felt on the practice range, before my round began.  It flattened my shorts and shirt against my body. It mocked my practice shots, bending them from left to right and back at me. It seemed to add three or four clubs to a 150-yard shot. 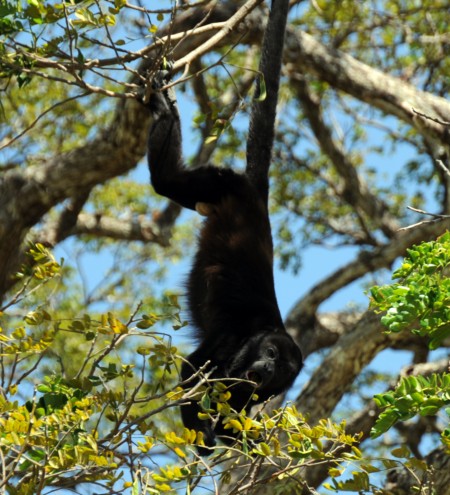 “Is it always this windy?” I asked a member warming up nearby.
“No,” he said, leaning into a 7-iron.”Usually it’s stronger.”
The wind gusted and knocked my golf bag over.
“Now it’s blowing!” the member said.
Fortunately for players at Hacienda Pinilla, designer Mike Young got a lot of land to work with, and he built very wide fairways. If he hadn’t, it might take a half dozen balls to finish a round. But even though it’s fairly easy to keep the ball in play, Hacienda Pinilla is going to test a player’s wind game. Can he work the ball against a quartering wind? Can he hit it low into the wind? Can he tee it high and take advantage on a downwind par five? And most of all, can he keep the wind out of his head? Can he pick a club, see his shot, and hit it confidently, even if the wind is gusting or dying down?
It’s an exhilarating challenge, and it’s one of the reasons why Hacienda Pinilla is en exhilarating golf course.
It’s set midway along the coast of the Nicoya Peninsula, close to Pacific Ocean beach towns and fishing villages like Playa Tamarindo and Brasilito. The foothills of the Central American cordillera surround the course, but they’re not in it. The land in its natural state is fairly flat, with brown grasses more reminiscent of a prairie than a jungle. Cattle ranches are neighbors. But there are no close neighbors. The golf course is in the middle of a gated, 4,500-acre enclave that in early 2012 had a hotel and some widely scattered private villas. Someday, the property may be crammed with homes and people, but thanks in part to the Great Recession, it presently contains a lot more iguanas than people.
Two of Hacienda Pinilla’s holes, the par-five 14th and the par-three 15th, abut the Pacific. They’re the ones that are likely to be pictured on the course’s web site. But while they’re good holes, they’re not the best that Young designed. 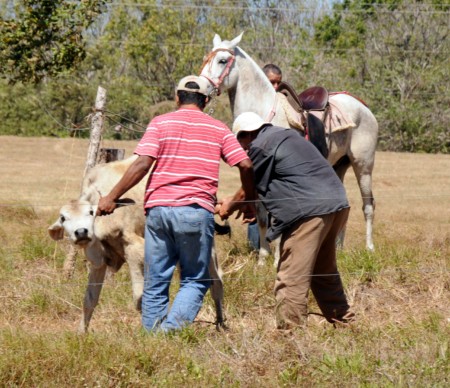 Roundup between the 12th green and 13th tee

Short, strategic par fours are often the best indicator of design quality and Hacienda Pinilla has a great one, the 10th. It’s a dogleg from right to left, measuring 363 yards from the backs tees, 337 and 307 from the tees mortal men are likely to use, and 233 from the ladies’ tees.  The land rises from the tee as the fairway turns to the left. But about 240 yards out from the back tees it abruptly drops down into a gulley that plays as a water hazard. A big hitter might try to cut the dogleg and reach the green from the tee, but it’s a gamble, because misses will be severely penalized. The successful, precise layup shot off the tee leaves a wedge approach, but it’s trickly, because of the wind and the fact that the kdiney-shaped green is segmented into three tiers, with a deep bunker guarding the back and middle tiers. If the wind blows a ball onto the wrong tier,  the player may not even be able to putt directly at the hole.
The toughest hole on the course is the 17th, a par four of 441 yards from the back tees. It’s tighter than most holes at Hacienda Pinilla, although an irrigation pond to the right of the tee is not really in play. The prevailing wind blows from the elft nito a player’s face. He has to aim toward a fairway bunker and trust the wind to push the ball into the fairway.The long second shot is tough because of the quartering wind and the fact that the green is very narrow, especially with a forward hole location.
The course is very well groomed. Fairways and tees are plush. The greens are cut tightly and they’re fast, fast enough that the wind becomes a factor in how far putts roll and how much they break. The course has an excellent practice area with grass tees and several chipping and oputting greens. It measures 7,296 yards from the back tees, with a rating of 75.7 and a hefty slope of 132.
Hacienda Pinilla currently accepts outside play. There’s an inn, La Posada, on the property and an affiliation with a nearby JW Marriott Resort. 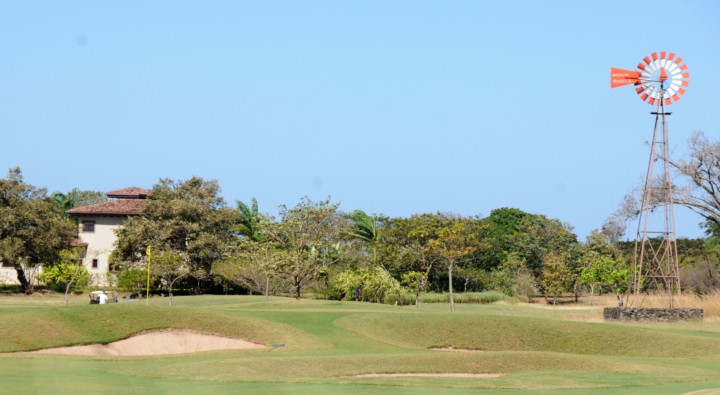 The green complex at No. 4 has a ranch feel