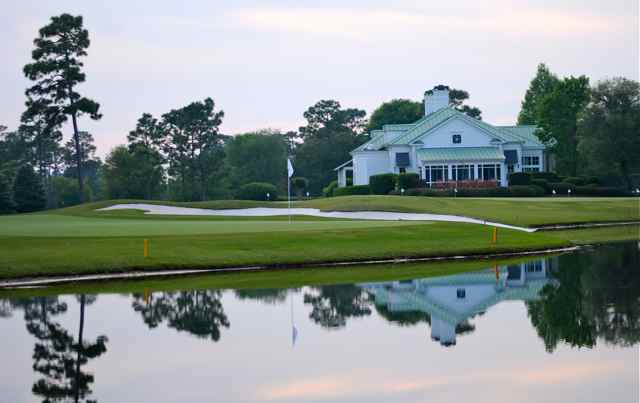 The home hole at The Reserve: Privacy has its privileges

I’ve written before about the deterioration of daily-fee golf on South Carolina’s Grand Strand. The coastal strip surrounding Myrtle Beach was once perhaps the choicest American venue for public golf, with over 100 reasonably priced, well-conditioned courses. During the past couple of decades, things went sour. Green fees got pricey on the best tracks. Service became perfunctory. Worst of all, the pace of play on Grand Strand courses went from slow to abominably slow, thanks to bumbling buddy-trippers and summer vacationers playing their annual round.

So it’s time to consider the private options on the Grand Strand. Up first: The Reserve, a 1998 Greg Norman design in the Litchfield Beach area.

The club has been private since its inception. But that’s a risky business on the Strand, where the permanent population of retirees and semi-retirees is easily seduced by the discount packages increasingly on offer from the public courses. The Reserve’s members declared bankruptcy in 2009, clearing the way for a company headed by Raleigh, N.C. businessman John McConnell to buy the premises. McConnell, who built his fortune in medical software, has bought up seven distressed private clubs in the Carolinas.  Pay to join one and you get access to all seven, which makes Reserve membership a potential value for anyone who lives in the North Carolina Triangle or Triad areas and spends vacations at the beach. 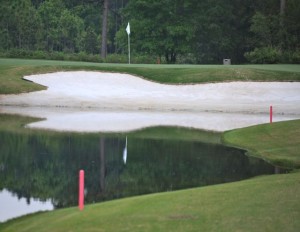 The 10th is guarded by a pond and an Arnold Palmer-style beach bunker.

The benefits of Reserve membership are apparent even before the round starts. The practice area is enormous. And there’s no need to buy tokens and get your range balls from a dispenser. They’re out there, stacked in neat pyramids on the green grass tee by the club’s obliging staff. Hit till you’re happy.  For anyone who’s dreamed of the day when he would finally have the leisure to practice, to find out just how good he could get, this is Nirvana.

The biggest benefit of private membership is on display as the time approaches to tee off. Or rather, it’s not on display. There’s no one in front of you when you arrive at the first tee. There’s no one behind you. I’m sure it’s not this way all the time at the Reserve. But I played in April, the peak of the Grand Strand season, and never had to wait, never had to worry that I was holding someone up if I took an extra moment to line up a putt. The round took 3:40. Nirvana, again.

I found the third benefit on private membership on the first green. It was impeccable–firm, fast, and smooth. I couldn’t find a pitch mark on it.   The whole course, in fact, was in excellent condition, though the fairways had some brown spots where the Bermuda grass had yet to green up for the summer.

The grass is tight all over. Norman designed The Reserve in evident homage to Augusta National as it used to be. There’s no rough anywhere. That’s almost a hazard near the greens, where all the chips and pitches must come from tight lies. But off the tee, it’s bang away. The wide fairways end near the tree lines in a border of pine straw and patches of white sand.  Scrubby woods lie just beyond, but a player has to seriously mishit a ball to lose one in the trees.  The trick off the tee is not to hit the fairway, but to hit the side of the fairway that gives the best angle to the day’s hole location. Often, that preferred line is guarded by bunkers.

Norman designed The Reserve when minimalism was all the rage in golf architecture, and it shows. He took a flat piece of land and gave his clients an essentially flat golf course, save for some bulldozed contours around the greens. There isn’t a downhill tee shot or uphill approach to be seen. He used water sparingly. There’s an occasional pond to be carried or skirted, particularly at the 18th.  There’s a strip of marshland intersecting the 9th fairway. But there are several ponds Norman chose not to bring into play—the golfer sees them only as he travels between holes. Stay away from the sand and it’s a very playable golf course. It’s also a bit repetitious. One tee shot looks much like another, at least until the final hole. 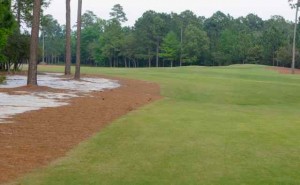 No rough: The Reserve's fairways end at the pine straw.

The 18th hole breaks the pattern. The hole, 604 yards from the back tee, turns gradually from left to right, and  the landing area for the tee shot isn’t immediately visible. But fairway bunkers and an intrusive tree are very visible indeed, producing a quiver of uncertainty about where to aim. The near edge of the pond fronting the green can’t be seen either, so a frisson of uncertainty can make the layup difficult. It’s a rousing finish, one that might whet the appetite for a third nine.

At the Reserve, a little extra play can easily be arranged. Privacy has its privileges.