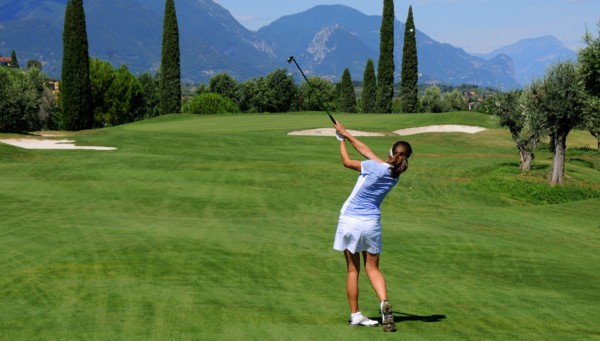 The approach to No. 4 at Garda Golf

Why not? Doesn’t Italy deserve to be known as a destination for lovers of golf as well as lovers of opera? On a recent trip to northern Italy, traveling from Milan to Venice, I decided to find out by sampling five courses. Some were rated among the top dozen or so in the country. Some were simply on the way. The first report was on Bergamo and the second was on Venice. 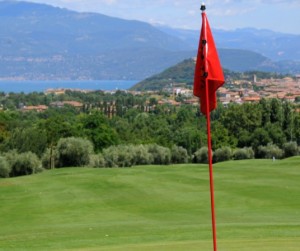 The view from the first green at Garda Golf

It would take Paul Cezanne to do justice to the scenery around Garda Golf Country Club. Olive trees with pale green leaves and tall, improbably slim cypress trees line the fairways and dot the hillsides. In nearby villages the ruins of a castle and a white church with a carillon are on view, amid houses with stucco walls and red-tiled roofs. In the distance, far below, lie the royal blue waters of Lake Garda, full of sailboats on a summer Sunday. Rugged mountains dominate the far horizons.

The golf course, happily, matches the surroundings. Garda Golf, designed in 1986 by Cotton, Penninck, Steel and partners, has been the site of a couple of Italian Opens. It is the home course of Matteo Manassero, who won the 2009 British Amateur at the age of 16. It’s a gem.

The front nine moves up and down the hillside from the palatial clubhouse. One strong hole follows another. The second nine most often chosen by the members on this 27-hole facility descends from the clubhouse and meanders through a valley.

The course has an excellent set of par fives. They offer challenges for players of all but the highest professional levels, requiring thought and precision on all three shots from those who play conservatively and heroic carries from those who seek two-putt birdies. This is rare. Most designers seem to give little thought to the layup second shot on par fives. Not here. There’s usually a hazard in play. On No. 3 it’s a pond that juts into the fairway 100 yards from the green. On No. 5 it’s a ravine. 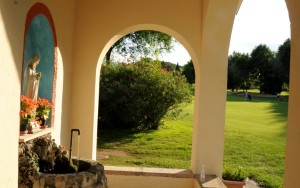 Prayer can be the last resort of golfers on No. 18.

The course has several challenging uphill fours, particularly when they play into the prevailing breeze. But it’s the downhill shots that provide the most pleasure at Garda Golf. A well-struck drive can hang for many pleasurable seconds over the lake, before seeming to float gently onto the fairway.

There was good variety on the par threes, the most memorable of which is No. 2, which falls precipitously about 60 feet from the tee to a shallow green fronted by water. The only type of hole that was missing was a sporty, drivable par four.

The course conditioning was easily the best I’ve seen in Italy. The fairways were  generally tight, the greens plush, and the roughs reasonably free of weeds. Flowering bushes are placed thoughtfully in many locations. There is even a little shrine to the Blessed Virgin on the left side of the 18th fairway, perhaps for those whose last hope for a birdie is divine intercession.

Garda Golf easily earned an A in my rating system. It’s hard to think of an inland golf course anywhere in the world with a more pleasing setting.

Lake Garda, which extends 30 miles from north to south, is a popular vacation destination for both Italians and Germans. It’s got a wide spectrum of hotels and restaurants. The very well-heeled can stay at the Villa Feltrinelli, which was Mussolini’s residence during the last days of his regime. There are hotels and campgrounds for the masses. But perhaps the most interesting option is one that Europeans call Agritourism, or, in Italian, agriturismo. You stay in a guest house on a working farm. At least some of what you eat or drink is the fresh product of that farm. 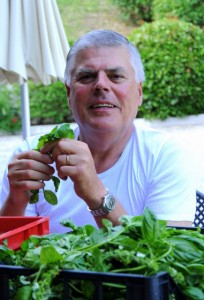 Il Bagnolo, high in the hills overlooking the lakeside town of Salo, is the guesthouse of a family of German ancestry called Gnes. The Gnes farm was assembled by a country veterinarian. His son, Carlo, is the current owner; he looks after 100 cows and the garden, which provides fresh produce.

The overnight accommodations at Il Bagnolo are modest and clean, but they are not the reason that a steady stream of Mercedes and BMWs make the climb from the lake on a winding, narrow, barely paved road. People come for the food, especially the pasta.

In summer, Il Bagnolo guests dine under a spacious white marquee attached to the side of the guesthouse. Across the lawn, they can see Lake Garda in the distance, turning silvery as the sun sets. There is no menu. Signora Elizabetta Gnes visits each table and tells diners what the kitchen has prepared.

One night, the pasta choices might be a lasagne with beef, veal and pork, or a linguini with pesto sauce. The pasta, fresh and tender, is the star. The sauces only emphasize it. The pesto was ground very thin—mostly basil and olive oil with just a hint of pine nuts. Another night the first course choices might include pappardelle, is a big, wide ribbon of pasta with a beef sauce. It’s very simple, but the beef has a subtle, rich flavor, unlike the faintly cardboardy beef sauces made from U.S. supermarket ingredients. Another choice might be fusilli with a rabbit ragout, its seasonings so finely chopped that they seem to disappear.

Il Bagnolo also does some excellent grilled beef and chicken, as well as superb desserts. The vanilla ice cream with amaretto biscotti backing and an amaretto sauce is what the old Good Humor toasted almond bar would be, if there were a Good Humor truck in heaven. 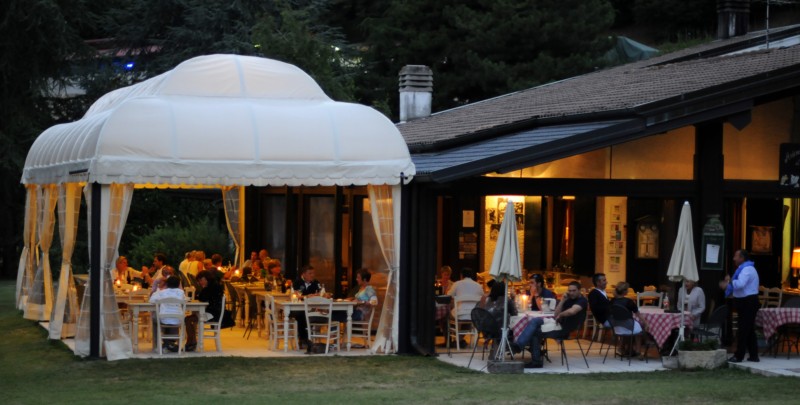