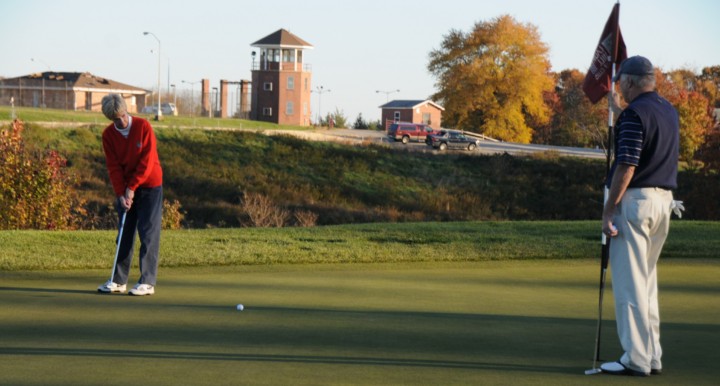 Putting on the 13th at Laurel Hill, guard tower in the background

From 1916 to 2001, spending time in Lorton was not good for a Washingtonian’s reputation. That was when the District of Columbia’s penitentiary was located in Lorton, about 20 miles south of the capital at a railroad crossing in Virginia farm country.

But all that has changed. Back in 2001, the penitentiary closed. It and 1,000 surrounding acres were returned to Fairfax County for public use. A high school was built. Parkland was set aside. And a golf course was designed by Bill Love, with several holes in the shadow of guard towers from the old prison, left intact for history’s sake.
Nowadays, Lorton is the site for what just might be the best daily fee golf course in the Washington area, Laurel Hill, which opened in 2008. Doing time at Lorton now might mean honing your game for the U.S. Public Links championship, which will be held there in 2013. 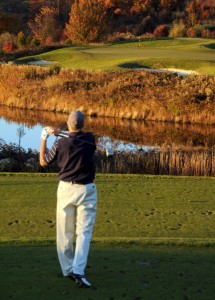 Hitting to the par-three 16th

When the U.S.G.A. picks a new golf course to host a national championship, it’s a sign of quality; the boys from Far Hills, N.J. are not in the habit of holding competitions on goat tracks. And after playing Laurel Hill, it’s easy to see what the attraction was.
Laurel Hill is a long, imaginative, and beautifully conditioned golf course. The fairways are plush. The greens are smooth and very fast. There’s currently lots of room to play off the tees, although some well-placed bunkers can cause problems if the drive goes off line. But when the rough expands, as it doubtless will before 2013, Laurel Hill is going to be challenging indeed.
That’s because the Laurel Hill greens complexes can make life hard for even the longest hitters. The golfer needs to keep his ball below the hole. Downhill putts are tough to stop anywhere near the hole. Missing a green and leaving a chip that runs downhill to the hole courts a bogey, perhaps a double.
Take, for instance, the par four third hole, which plays 452 yards from the back tees and 423 from the whites. It’s all uphill. The green has a severe tier that separates the back third from the rest. Putting from the bottom to the top is delicate—a ball hit not quite hard enough will roll back to the front of the green. Putting from the top to a pin cut on the bottom, it may be impossible to stop a ball near the hole.
Then there’s the 14th, an uphill par three that plays at 218 yards from the back markers. It’s tough to hit a long iron high enough to make a ball check up on the front portion of the green. But a putt struck from the back tier can easily roll off the green and back down the fairway.

The 14th is typical of the elevation changes on the property. There are long, uphill holes requiring power and downhill holes requiring judgment and finesse. On No. 4, a par three of 188 yards, the green is so far below the tee that it can be tough to select the right club. I hit what I thought was a 160-yard club to a pin 172 yards away and air-mailed the green.
But even though double-bogeys littered my card, I enjoyed playing Laurel Hill and would gladly go back. With green fees ranging from $89 on summer weekends to as little as $34 in the winter, it’s affordable. There are also seasonal memberships that make sense for people who live nearby and can play it a lot.
Laurel Hill is so good that its only flaws are really errors of management, not of design or maintenance. The single worst decision may have to do with the design of the scorecard. Laurel Hill has five sets of tees–black, blue, white, gold and red. At 6,021 total yards, the gold tees are probably the correct choice for the average golfer. But the gold tee figures are placed at the bottom of the card along with the red tees, leading the typical male golfer to deduce—incorrectly—that the gold tees are only for players with skirts. Joe Average will likely be overmatched playing the white tees at 6,386 yards, and his pace of play will reflect that. But his masculinity will be intact.
And the customer service! There isn’t so much as a Porta Potty anywhere on the course; maybe the management thinks females can relieve themselves in the bushes. There wasn’t any drinking water available on the day I played, either. Maybe the management thinks that if it’s not going to provide toilets, it’s merciful not to provide water.
But, hey, guys. I suspect that even in solitary confinement, Lorton gave prisoners a toilet and an occasional drink.  Laurel Hill should do no less.