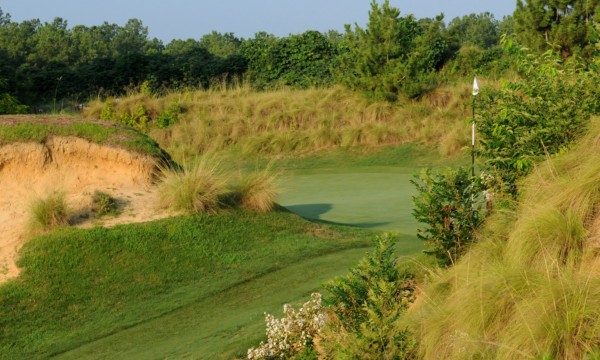 The 13th green at Tobacco Road, surrounded by dunes

Returning after an absence of several years to the first tee at Tobacco Road, I felt an unusual mixture of emotions: exhilaration, fear and sadness. Exhilaration because the first tee affords a view of a broad green fairway, towering dunes covered in waving grass and, beyond a notch in those dunes, a second inviting segment of fairway. Fear because after a long drive to the little town of Sanford, N.C., I devoutly did not wish to begin my round by losing a ball in the dunes. And sadness because Mike Strantz won’t be creating any more bold. testing golf holes like the one in front of me.

Strantz, who passed away in 2005, just as his golf architecture career was reaching full flower, was either a madman, a genius, or a little of both. He saw a golf course as an opportunity to force a golfer to confront risk and frustration dozens of times during the course of a round. He spurned the conventional.

He managed to design seven courses before he died: Caledonia and True Blue in Pawleys Island, SC; Bulls Bay, outside Charleston, SC; Royal New Kent and Stonehouse in the pine barrens between Richmond and Williamsburg, VA; and Tot Hill Farm and Tobacco Road in central North Carolina. He also re-did the Shore Course at Monterey Peninsula C.C. in California, and it instantly became a popular addition to the rota of courses used by the PGA Tour at the AT&T Invitational each year.

I have not seen the Shore Course, but I have played the other Strantz courses. Of all of them, Tobacco Road strikes me as the purest version of the Strantz philosophy. He saw no reason to create boring, undistinguished golf holes, and Tobacco Road has none of them. 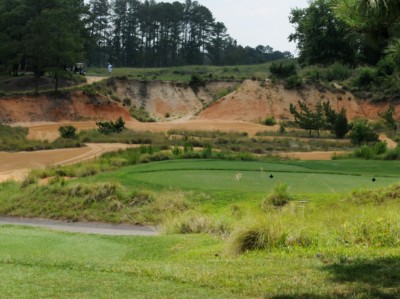 The view from the 18th tee. There's a fairway up there, somewhere

The best way to convey what this means is perhaps just to run down the key features of the first few holes. On the aforementioned No. 1, the tee shot has to carry about 210 yards over a row of dunes; the second shot has to carry another set of dunes; only then does the player see the green. At No. 2, the tee shot carries a broad waste area to a fairway that is all but invisible. No. 3 is a one-shot hole with a green what rises and falls like the swells of the ocean. At No. 4, which is shaped like a question mark, a three-shot hole can become a two-shot hole if the player dares to carry an enormous sand pit left over from the property’s former days as a quarry. No. 5 is a short par four that offers a very risky direct route to the longest hitters and a safer, but still tricky longer route to the rest of us.

And so it goes. Blind shots. Forced carries. Geens tucked behind dunes. Greens so severely contoured that putting the ball on the wrong side leads to an inevitable bogey. Bunkers with high, crude walls gouged from the earth. Finally, on 18, the player steps to a tee on one side of a quarry chasm and aims for a fairway he can only trust is atop a sand cliff 175 yards in front of him. Then the long, blind second shot to a massive green behind yet another dune.

Tobacco Road has been called one of the country’s most difficult courses. It isn’t, really, if the player picks a set of tees that give him carries he can manage, then smacks his ball solidly toward landing areas he must conjure from his memory and imagination. The fairways are actually quite wide. But if his shots are less than strong and sure, the player will spend a lot of time tromping around the dunes and sand pits, the hot Carolina sun beating down on him, perhaps thinking less than charitably of Mike Strantz. 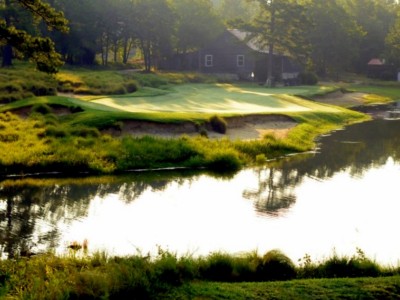 The par three 14th has a rustic look

If Strantz had a serious flaw as a golf course architect, it wasn’t that his courses are too hard to play. It was that his courses are too hard to maintain. The high faces of his bunkers and the sharp contours of his greens would probably be better suited to a private club that could afford to employ enough staff to hand-mow the greens and re-flash the bunkers after every thunderstorm. But Strantz’s courses are public tracks, and when I play them, I see signs that the owners have decided that keeping the places the way Strantz built them is just too expensive. Bunkers have been filled in. Greens have been given softer, flatter contours. At Tobacco Road, they don’t maintain the bunkers as sand bunkers any more. They let the sun, wind, rain, golf carts and footprints do what they will, and the starter advises players that the local rules enable them to improve their lies in any sandy area. It’s not golf as the U.S.G.A. would define it.

But that’s a minor quibble if you manage to carry the quarry and find the 18th fairway, then manage to hit a 5-wood over the dune, then find your ball sitting safely on the green. As Mike Strantz knew, golf is in the end about exhilaration. Tobacco Road offers many opportunities to find it.