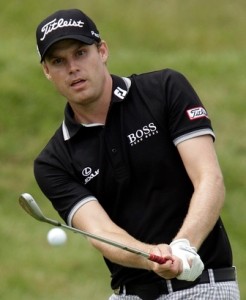 Two systems for developing golfers will be tested this afternoon in the fourth round of the PGA Championship—the way America does it and the way the rest of the world does it.

I’m guessing that the winner will be one of the three players at the top of the leader board after the third round—Nick Watney, Dustin Johnson, and Rory McIlroy. Watney and Johnson came up through the American college system. McIlroy, like a lot of pros from elsewhere in the world, turned pro after getting the equivalent of a high school education.

Among non-American golfers, whose numbers are steadily growing within the world’s top fifty, I have heard a certain scorn for the American system. In this view, a talented American kid reaches the age when he should be getting serious about his life’s work and, instead, he goes to college.

A college golf coach becomes his mentor, or at least one of his mentors. This coach isn’t usually a top-flight instructor. But he is often the one who’s there when the player’s swing needs attention. He has an incentive to discourage the player from working on any significant swing changes. He needs the player to produce immediately.

He’s also the one handling all the logistics of the player’s competitive life. There is, from the non-American point of view, a certain coddling.

If the player tries to be a serious student, he spends a lot of time studying something that doesn’t relate to golf. If he’s not serious about his studies, he still spends a lot of time pretending to pay attention in Mickey Mouse classes. The real work of becoming a world class player doesn’t start until after graduation, at the age of 22 or so.

The rest of the world does it differently. If a kid has talent, he turns pro at 17, and golf is his business. He may, in countries like Australia, go to an institute for sport. There, his only field of study will be making himself a better golfer, with the help of the best coaches the country can find. He may, in other countries, just start entering tournaments and trying to make money.

I know the three kids at the top of the leader board (along with a few just a notch down, like Australian Jason Day and German Martin Kaymer) are individuals and their individual characteristics will have a lot to do with who wins. But I will still see this final round, in part, as a battle of development systems. It will be interesting to see which system prevails.