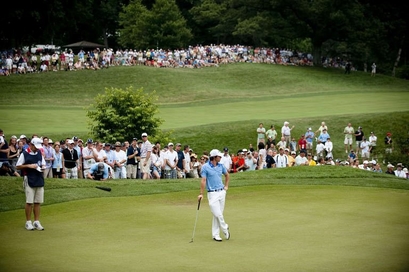 Spectators watched this year's Open, but how much longer will they?

Maybe it was when I couldn’t see Rory McIlroy hit the ball in the water—and he was 50-yards away from me. Maybe it was when I queued for twenty minutes in a sweaty herd of people, waiting to be admitted to a tent for the privilege of standing in another line to buy an overpriced lunch. Maybe it was when I read the very long, very Prussian list of things verboten to spectators, from cell phones to asking for autographs. But sometime during my day at the U.S. Open last week I started to wonder—how much longer is golf going to be a sport played before big crowds of live spectators?

I will stipulate that years of being a sportswriter may have spoiled me. As a working reporter, I got used to free admission, free food, and the best seats in the house. This time around, I paid $185 per daily ticket to see Friday’s second round–$110 for the basic admission and $75 for access to the “Trophy Club,” a cavernous, air-conditioned tent/cafeteria/bar that, back in February, I thought might be a good place to wait out a thunderstorm.

I think about what I got for that money and I have to wonder—why would anyone with an air-conditioned home and a flat-screen, hi-def  TV want to be there in person?

At home, watching the final two rounds, I got air conditioning, a very comfortable chair, reasonably priced snacks and beers, and a close-up view of every swing McIlroy took, as well as every swing anyone remotely close to contention took. I didn’t have to sweat parking or take a shuttle bus to the course. And the cost to me—nothing.

At Congressional, I sat in the bleachers behind the 10th hole for a while. With binoculars, I could look across the lake to the tee and figure out who was hitting. I couldn’t really follow the flight of the shots they hit—the balls got lost against the backdrop of the white clubhouse and the hazy sky—but I could see the balls plop to earth and watch the players putt.  No. 10 proved to be the highlight of my spectating experience.

My wife and I watched a few groups play up to the 15th green. Then we decided to get a spot along the 18th hole, reasoning that we should have been able to see both the long-iron second shots and the play around the peninsula green. We thought we could also see the play on No. 10. We tried to get seats in the bleachers that would allow us to do that, but they were either full or reserved for guests of the U.S.G.A.’s corporate “partners.”

The bleachers we did find space in, on the right side of the fairway, were canted in such a way that we could see only some of the second shots. We definitely couldn’t see McIlroy’s because he’d yanked his drive into the woods on our side of the fairway.

After lunch, we thought we’d try the bleachers by the pond at the par-five sixth. But, again, the open spaces were reserved for people with corporate connections. So we trudged around for a while, looking for a vantage point on the sixth and seventh. But every spot we could find was either blocked by trees, already taken, or behind several rows of people. After an hour or so, we got on the bus, went home, and watched the last few groups of the day finish on television.

I know that this isn’t entirely new for spectators at golf tournaments—except for the prices.  What’s really changed is how the live experience stacks up against the televised.  I can remember (vaguely) when golf was broadcast in black and white, there were maybe five cameras on site, and only the last four holes were shown. It wasn’t that long ago that Augusta National became the last major championship to open the entire course to TV.  During the 2011 Open, a satellite provider promoted a four-channel package that included the network broadcast, coverage of a “featured group” from 1st tee to 18th hole, continuous looks at another hole, etc. It’s only a matter of time—very little time, probably—before a viewer will be able to order up complete, close-up, 3-D, hi-def coverage of a particular hole, a specified group, or anything else he pleases.

Once that happens, I don’t think it will be long before people will come to the very reasonable conclusion that watching in person just isn’t worth the money or the trouble. The on-course, in person experience will become the province of a small, elite number of corporate guests who will probably get some sort of special access to players to keep them interested.

Think that’s an extreme prediction? Pay attention to these harbingers of things to come:

People used to die waiting to get to the head of the list for Masters tickets. Now Augusta National is offering them for sale at www.masters.com.

Tickets for the 2012 Open at the Olympic Club in San Francisco won’t be sold through a lottery. It’ll be first-come, first-served.

Tickets for the 2011 Open didn’t sell out until the USGA had bought an expensive barrage of broadcast ads in the Washington area.

And, in a sign of the waning attraction of the run-of-the-mill tournament, the 2010 Constellation Energy Senior Players Championship (a major on the Champions Tour) offered free admission—and couldn’t draw crowds.

I doubt that the diminishing number of live spectators will hurt the U.S.G.A., the players, or Augusta National in the place they most care about—their bank accounts. They’ll find new ways to monetize the home viewing audience as the game becomes a sub-category of reality TV.

The roar of a big cheering throng, echoing through some trees, celebrating a string of birdies by a favorite player—that will go the way of plus fours and hickory shafts and Arnie’s Army. Only a steadily dwindling band of fans will remember how it used to be and mourn the change.

2 Responses to “How Much Longer Will Crowds Watch Golf?”