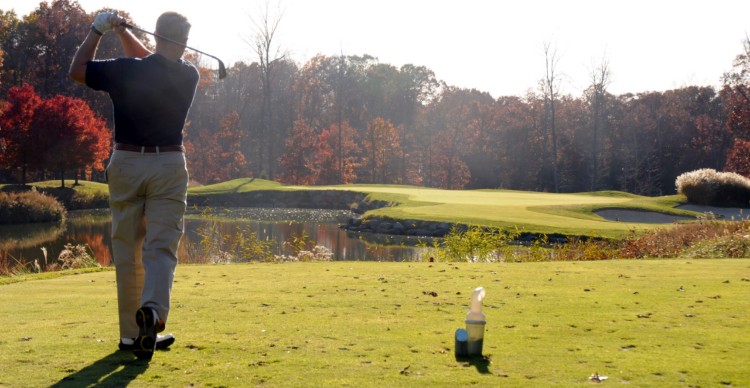 Hitting to the long, par-three 3rd at Westfields

The way I’ve been playing golf lately, you’d think the last thing I’d want to see during a round would be a graveyard. The symbolism is too obvious. The final resting place of my single digit handicap. The ultimate destination of my hopes for a score in the 70s. The retirement address I edge closer to with every yard that drops off my average drive.
So you’d think that I’d have little use for a golf course with a small graveyard marked off by rocks beside the fairway on the—wait for it—13th hole.

But I do like Westfields, which has the aforementioned hallowed ground. That’s a testament to the quality of the golf course, which I rate as one of the two best daily fee options in the Washington area. The Westfields golf course might rank a shade behind Laurel Hill in terms of natural terrain, design and turf maintenance. But Westfields, which is in Clifton, Virginia, not far from Dulles International Airport, is much better at customer service. They’re really Nos. 1 and 1A. 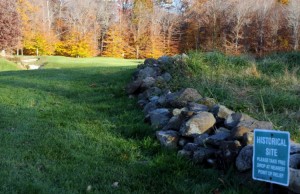 Historic area sign on No. 13. The nearest point of relief from this hazard may be heaven.

Fred Couples gets a design credit for Westfields; the back tees are called the “Boom Boom” tees in his honor. But Couples works with the professional architects at the Bates Design Group; Gene Bates and his father-in-law, Ron Kirby, have resumes that include stints with Dick Wilson, Robert Trent Jones Senior and Jack Nicklaus’s design company. Those bloodlines show through at Westfields.

It’s a polished design, with the hole corridors cut through stands of mature woods and accented by big, handsome, scalloped bunkers. The turf, with a few exceptions, is lush. The ground probably lacked contour in its natural state, but bulldozers worked skillfully and the course’s humps and hollows look almost natural. Best of all, from an esthetic standpoint, the only house you’re likely to see at Westfields is the clubhouse. There are not, as yet, any of the condo canyons or McMansions that line so many contemporary layouts.
The design has a bit of everything, from long holes requiring Couples-style power to short finesse holes that invite a gamble. It starts innocuously enough, with a couple of medium-length par fours.  But the third hole is a brute, a par three over water that plays 223 yards from the Boom Booms.  If the player tries to play to the slightly safer, right-hand side, he might hit the green but he could very well three-putt.  Several more holes require lots of power: the 6th plays from 473 yards and the 8th from 467. The finishing hole is a long par four, curving right, where the second shot has to carry a wetland near the green. 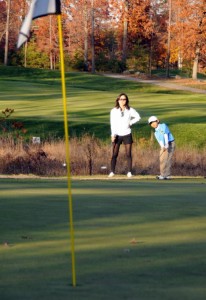 A boy, with his mother caddying, chips to the 9th hole at Westfields.

I was more taken by some of the sporty, finesse holes on the course. No. 14 is a drivable but risky par four, only 250 yards from the white markers. But the player who goes for it had better be precise. Woods, marsh and sand await a drive that’s not far and sure. I also liked No. 13, the graveyard hole. The construction of the golf course uncovered an unmarked burial site that is believed to date from the Civil War. The builders covered it over, built a low rock wall to bound it, and laid the fairway around it. No. 13 is a short par four with a downhill second shot. The green complex features big, deep bunkers and steep slopes that will punish a mishit pitch.
Overall, Westfields is 6,897 yards long with a slope of 136 from the tips.
The web site for the club, www.westfieldsgolf.com, has the epigram “Public golf kept private.” The idea is that the Westfields golfer gets to feel like a private club member. Actually, the service is better than it is at a lot of private clubs I’ve been to. The staff goes out of its way to be polite, friendly and welcoming. There’s a cost to this service—the green fees at Westfields range from $109 on summer weekends to $49 in the dead of winter.
That’s high for the Washington area, where most folks make do on modest, government-scale salaries and are loathe to pay a green fee higher than the course rating. You wouldn’t know that during a political campaign season, where candidates like to say that everyone in Washington is a dumb spendthrift who’s too well-paid, but it’s true. The good news is that the folks at  Westfields seem to feel that they have to justify their premium price by providing a great golfing experence. And they do.