It’s been a tough couple of years for the PR staff at the Cancun Convention and Visitors Bureau. First there was that nationwide flu outbreak in 2009. It all but shuttered many hotels.  That died down, but there are still pernicious notions about Mexico floating around. One is that travel anyplace in Mexico is dangerous. Another is that Cancun is full of drunken college students sleeping four to a room and making noise till dawn. The image problem has gotten bad enough that the CCVB has taken to inviting American journalists for a quick, free look at the resorts and golf courses of Cancun and the Riviera Maya. Including (full disclosure) me. 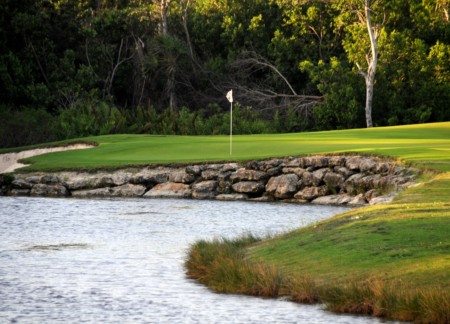 So before I get to the golf course review, let me address a couple of my hosts’ concerns. First, safety. I can’t speak to the security of border areas immediately south of the United States, where drug wars are raging. (Of course, it should be noted that if Americans weren’t intent on buying and consuming those drugs, the Mexicans wouldn’t be having wars over the business.) It may well not be advisable to wear your Rolex while taking a walking tour of Tijuana. But Cancun and the stretch of Yucatan coast to the south are far from the epicenters of Mexican violence. And Cancun could well be called Cocoon, because visitors are swathed and protected in the experienced hands of the Mexican tourism industry from the moment they step off the plane.
They’re met at the airport by drivers from their hotels. They’re whisked down a four-lane, well-patrolled highway to a resort with gates, walls and security guards. Once inside, they need never leave, particularly if the resort is “all inclusive,” which means that meals, alcohol and many recreational activities are covered in the cost of their rooms. If they book an excursion, say to visit a Mayan ruin, they’ll again be on a bus or in a van, escorted by guides and interpreters. It’s not adventure travel, but it’s safe. Think of being on a cruise ship, but without the waves. 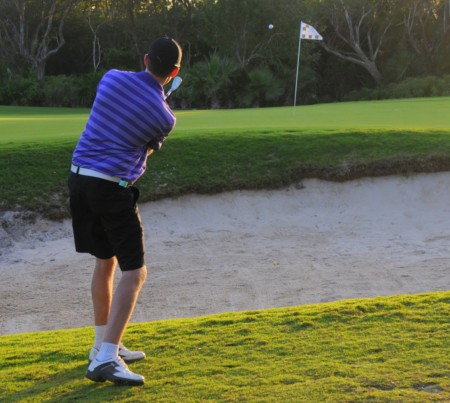 A tough chip as the sun goes down on the Jungle 9, Moon Spa & Golf Club

I did “venture” independently one evening, taking a taxi with my colleague Anthony Pioppi to the town of Puerto Morelos for dinner. We had seafood prepared in the Veracruz style, overlooking a small harbor full of boats bobbing gently in the surf. It was Saturday night, and the town square was full of families. Children ran around a combination soccer-basketball court. A multi-generational group played volleyball, without a net, on the beach. Half a dozen folk dancers, wearing leggings covered with beads and tiny cymbals, stepped and swayed to the music of a man playing a guitar-like instrument that was shaped like a gourd. Old men drank coffee in the cafes. One Saturday evening in Puerto Morelos doesn’t disprove the foolhardiness of backpacking alone through a border town like Juarez, but it seemed perfectly safe.
And as for those college students: It was the last week in February, a little early for spring break, but I saw a lot more multi-generational families–grandparents, parents and children–than I saw unsupervised twenty-somethings. That’s not to say there weren’t some inebriated guests at the Moon Palace, where I stayed. Adults are just as prone as college students to make unwise choices when all the margaritas you can drink are included in the cost of a room. But they did seem to toddle quietly off to bed around midnight.
Early in the morning, in fact, some of them were awake and ready to play golf. Since the Moon Palace has no fewer than 2,400 guest rooms, it’s probably fortunate that it has 27 holes of golf. (Golf, by the way, is not part of the “all-inclusive” deal. But at the moment, the Moon Palace gives $1,500 in `resort dollars’ for each week a guest stays. That would be about enough to cover a daily round of golf.) But the Moon Spa and Golf Club’s Jack Nicklaus design is not the sort of place you want to play while hung over. It is a stern test. 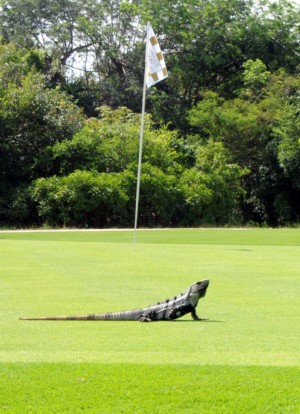 Iguanas will usually let you play through if you ask politely

All three nines–the Lakes, the Jungle and the Dunes–are carved into dense tropical vegetation, either woodland or marsh. They’re very well-conditioned. Greens are smooth and fairways are plush. Though the playing corridors are reasonably wide, there’s not much margin for error. A ball that leaves the grassy area is usually a ball lost–either in a pond or in an impenetrable thicket. Not for nothing does the course put signs in the golf carts advising customers that they’re not allowed to play with range balls or to buy found balls from the superintendent’s crew.
Some golf courses give the average player a break by placing fairway bunkers out of his reach. Not the Moon Palace. On quite a few holes, the white tees are set so that the fairway bunkers are between 190 and 220 yards away–just where Joe Average can reach them. They’re deep and penal.
On the Dunes 9, the challenge gets particularly stiff. The “dunes” in the name are artificial, created when the course was built. Sometimes, as on the first hole, they penalize a player who hits his tee shot to the right, trying to avoid the jungle to the left. On the second hole, a big mound masks an odd and capricious green complex. The hole is a par 5, playing from 569 to 442 yards. Water and sand line the right side of the hole. The player who successfully avoids them and leaves himself a 100-yard pitch to the green sees four very deep bunkers and a big mound, above which half the flag might be visible. What he doesn’t see is that the green tilts steeply away from him. If his pitch isn’t high and it doesn’t land softly on the front of the green, it’s likely to bounce down the slope and halfway up a facing slope behind the green, leaving an awkward chip.  It’s a nasty surprise.
But on a good golf course, like this one, risk enhances the satisfaction of a good shot. You might, for instance, close your round on the ninth hole of the Lakes 9, a par four that plays 445 yards from the back tees and 373 from the whites. If you avoid the fairway bunkers on the right, you’ll have a middle iron to the green. To your left, a lake lines the fairway, threatening to swallow any shot tugged or hooked. Straight ahead, there is a pot bunker that you’ll have to carry to reach the green. You hit the shot. It clears the bunker but lands in front of the green. The terrain kicks it to the left and it veers close to the rock wall on the edge of the lake. Then it stops, safe in the fringe. You chip close to the hole and save par.
It feels good.
And if the ball goes into the lake, the Moon Spa & Golf Club has an excellent range and short-game practice area where you can work the kinks out of your swing. You might consider taking a lesson from Jose Corona, a staff instructor at the on-site Nicklaus Academy. He’s got a lot of drills to fix your problems.
As Jack says, on a sign posted above the Academy’s door, the key to enjoying golf more is getting better at it.