I have never designed a golf course, but I believe it when golf architects tell me that the hardest piece of ground to work with is dead flat. It was no accident that golf developed on the coast of Scotland, where thousands of years of wind and waves had shaped the sandy ground into hills, furrows and dunes. The natural Scottish links terrain was a big element in the game’s appeal. People who would prefer to hit balls over flat, consistent surfaces probably gravitated toward croquet. 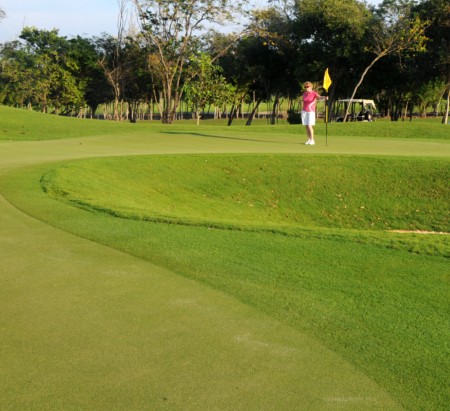 Can't get there from here: The green at No. 4

Nowadays, whether the venue is Myrtle Beach or Mexico’s  Riviera Maya, golf architects are often given land with none of the natural movement of the Scottish linksland. They have to design and build features to distinguish their holes from croquet courts. Some try to work subtly, using trees, water hazards and a light touch.
Not so with P.B. Dye, the designer of Playa Paraiso, a course belonging to an all-inclusive Iberostar resort and open to the public on the Mexican Riviera. The resort features, among other flights of imagination, a faux Mayan temple. In the faux spirit, P.B. Dye used bulldozers to create holes reminsicent of the most extreme works of nature in Scotland and Ireland. I have never met P.B., the son of noted architects Pete and Alice Dye, but I am willing to bet that when he was a toddler, it was tough to get him, his trucks and his shovels out of a sandbox. The guy loves to move dirt.
Take, for instance, the closing hole, a par 5 that plays 566 yards from the back tees. On the right side of the fairway, about 100 yards from the green, Dye bulldozed up an enormous mound and bunker, perhaps 10 or 12 feet high. It hides the green from anyone playing the third-shot pitch from the middle or right side of the fairway. To see the green, a player has to play to a little neck on the left side of the fairway or hit a long iron or wood over the hazard. And the green itself is narrow and kidney shaped, with sharp drop-offs on either side, guarded by protruding branches from two trees Dye opted to leave on the course.
I guess that responses to this sort of hole are a matter of taste. Some golfers will enjoy the imagination that the hole requires and the challenge that it poses. Others will find it too clever by half. I tend to fall into the latter group, though I admit it’s a subjective judgment. When I see an enormous mound guarding a par 5 green on an ancient course in Ireland I take it as the work of Nature, and I assume the course designer had no alternative but to work with the existing terrain. When I see a similar mound on a course built in the 21st Century, it rankles. It seems artificial. 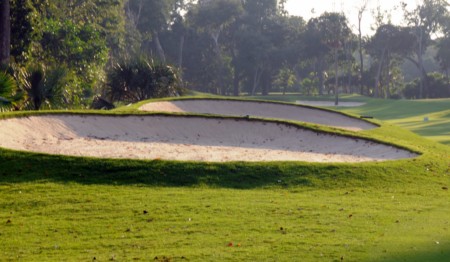 Crater-like fairway bunkers at No. 8

And Playa Paraiso abounds in artifice. Fairway bunkers can be shaped like craters on the moon. Greens can have roller-coaster slopes so severe that once a ball rolls over them and starts downhill, it’s not stopping for a while. If the pin is cut close to the slope, too bad. There’s a horeshoe-shaped green at No. 4 where you can’t putt from one side to the other because of an intervening pot bunker. The fairways have dramatic ups and downs and on several holes, the player can’t see the landing area for his tee shot.
Still, there’s a lot to like about Playa Paraiso. To begin with, it was in excellent condition when I played it. The greens were smooth and the fairways were plush. The sand was consistent.
Classicists will find some designs to their liking. No. 6, for instance is a par 3 built around a pond. Its long, curving green means that the hole can play anywhere from 165 yards to 125 yards from the back markers. The water carry becomes more of an issue as the hole locations move toward the back of the green.
There is an interesting take on the short, risk-reward par 4 at No. 13. It plays no more than 283 yards, but the green is hidden from the tee by humps mounds and no fewer than nine bunkers. The green is narrow, particularly at the front, and falls away sharply to tightly-mowed chipping areas. 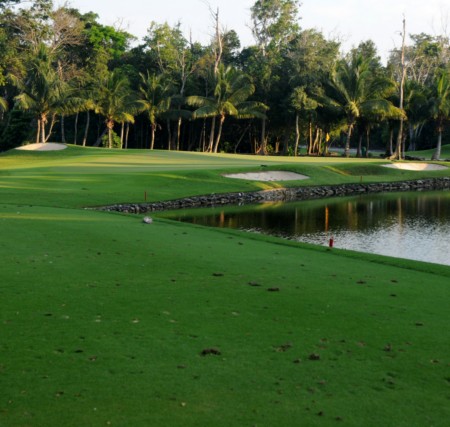 There’s out of bounds left and a patch of woodland right. It’s possible to hit a long, straight drive to that just misses the green, then make bogey or worse if your short game lacks finesse and touch.  There are a couple of places to lay up, but they’re guarded by deep bunkers. Altogether, it’s a hole requiring precision.
Perhaps more important to the vacationing golfer, P.B. cleared some land on the edges of his playing corridors. A ball that bounces through the grass isn’t necessarily lost. There’s a chance to play a recovery shot off hard-packed sand studded with pebbles and rocks.
Playa Paraiso is like a big, awkward adolescent. Despite elements of questionable taste and judgment, it means well, and it’s hard not to like.