The bunkers at Sand Barrens are deep, like the flaws in my poker.

Golf and poker, it seems to me, are among the world’s great complementary experiences, like vodka and caviar, or weddings and waltzes. One requires daylight; the other’s best pursued at night. One’s outdoor and the other’s indoor. One requires physical skills and the other is purely mental. But though they are different, they share an addictive essence. Playing either well requires total immersion in the challenges of the game.

I have a small fantasy about golf and poker. I think it should be possible to use one to finance the other. I have no illusions about my ability to win enough at golf to underwrite my poker. I know my limitations too well. But poker is another matter. I am strictly a recreational player, and when I play with friends I am content to break even. But in poker, there are hot streaks, hours when the cards break the right way, hours when the psychology of the table shifts and every player senses that your choice choices are the right choice. I thought there was a chance I could ride a hot streak to win enough at a modest little poker tournament to pay my green fees.

This was my quest. I needed a venue.

I decided to start modestly, in Atlantic City, NJ. Gambling came to the old beach resort in the 1970s, and gambling money produced a spurt in golf course development and renovation about twenty years later. There were half a dozen courses I could have picked to play. I chose Sand Barrens, a 27-hole, 1999 product of Dr. Michael Hurdzan and Dana Fry, architects known for their minimalism and environmental sensitivity. It’s conveniently located, just twenty miles and one Garden State Parkway toll plaza from the Atlantic City Boardwalk.

They worked with a generally flat piece of sandy land, covered with pine trees and scrub. Once they had cleared their playing corridors, they generally dug out framing waste areas, two or three feet deep, to flank the fairways. Most holes show the players acres of sand and trees from the tee. But the vistas are deceptively intimidating. The fairways, for the most part, are very generous–fifty to sixty yards wide. And the carries required to reach them are not long–less than 100 yards if a player picks the correct set of tees.  I played with Rick James and his son, Kevin, who were stealing an afternoon away while their wives looked after the children/grandchildren on the beach. They were often grinning when a tee shot that initially looked headed for disaster somehow found the short grass. 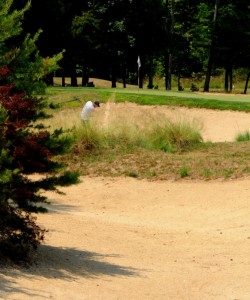 Sand Barrens lives up to its name.

The greens, in contrast, looked to be the easier part of the challenge, and they weren’t. They’re huge, generally forty to fifty yards deep and almost as wide. (There’s a double green, used by No. 2 on the north nine and No. 4 on the west nine, that looks like it covers a full acre.) The greens look easy to hit, and they are. But many of them have roller-coaster contours. They’ve got swales and hollows, segments and knobs. They’re easy to three-putt. My scorecard proved that.

I played the north and west nines, which would have had a rating of 73.2 and a slope of 135 had I played from the back tees. I thought the best holes were the fifth and sixth on the west nine. No. 5 is a short par five, 514 yards from the tips and 478 from the tees I played. The tee shot must be placed between woods on the left and a pond that flanks the fairway on the right and squeezes it to a very narrow landing area in the place where a big hitter, going for birdie, would want to hit his drive. If the second shot is a layup, it must either contend with bunkers and woods on the left or carry some of pond if it is to find the most ample part of the fairway. The green is large and segmented. It’s a hole that requires thought and precision on each shot, no matter how you play it.

It’s followed by a good par three, 203 yards from the tips and 177 from the whites. The tee shot has to carry an acre or two of gunch that, characteristically, make the hole look more intimidating than it is. There’s a landing area short of the green for fat shots, but you can’t see it from the tee.

Ultimately, though, I rated Sand Barrens a B, despite its thoughtful design. It might have gotten a higher grade if I had played it in the spring when the turf is fresh and the superintendent’s job is relatively easy. But I played in the middle of a July heat wave. The greens were fine, but the fairways were battered and the rough was patchy. Crab grass impinged on the tees and fairways. And there is only so much variety an architect can build into a flat piece of ground, assuming he doesn’t want to go wild with his bulldozers. Sand Barrens lacks real uphill and downhill variation. Still, at $65 via an internet special, it was a great value and a good start for the golf-poker parlay quest.

Most casinos these days offer no-limit hold ’em poker tournaments, which sound more reckless than they are. You buy in for a prescribed amount, which can be as low as $40 (plus a fee, maybe $10 or $20, to the casino). You sit down with several tables of fellow contestants. If you blow your initial stake, your tournament is over. If you last until only a prescribed number of players are left, you win some multiple of your entry fee. I chose to play at the Trump Taj Mahal in a $50 buy-in tournament. If I lasted until five players were left, I’d win enough to pay my Sand Barrens green fee and my room charge. 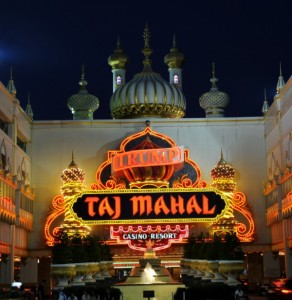 The entrance to the Taj Mahal.

I chose the Taj Mahal for two reasons. It had a big poker room back when most Atlantic City establishments didn’t. And I have always liked its unabashed, goofy kitsch. Though its name presumably refers to the austere, alabaster minarets of India’s Muslim shrine, the plastic domes and gewgaws that decorate the Trump Taj Mahal are copied directly from the inspired madness of Russian Orthodox cathedrals, like St. Basil’s on Red Square in Moscow. There’s a refined irony in the place. Or so I think.

It would not be hard, for a writer so inclined, to find things to criticize about the Taj Mahal. For starters, it doesn’t have free Internet service in the rooms. It costs $12.95 per day. I can understand that. Even though every Motel Six on the Interstate highway system offers free Wi-Fi, the Taj Mahal is not in business to provide quiet places for people to write email. But even when I tried to pay the $12.95, I couldn’t get Internet access. Nor could I from the computers in the hotel business center and the UPS store on the convention floor. No one had Internet access. For a writer attempting to feed a web site, this was a problem.

So was the need to aquire a Taj card. When I showed up in the poker room at 7:10, five minutes early for the 7:15 tournament I’d already paid for, I was told I couldn’t play until I had a Taj card. Where could I get one? “Behind those glass windows out there,” the poker lady said. Beyond the glass windows stood a long line, moving at the glacial pace of a Moscow grocery queue in the Soviet era. (Perhaps this was a subtle reference to the Russian motif in the hotel architecture.) I spent fifteen minutes staring at the ample butt crack of a woman in drooping jeans who was intently arguing about something with two and sometimes three clerks.

Finally, the line inched forward. But by the time I got back to the tournament, I was fifteen minutes late. This meant that for fifteen minutes or so, the dealer had been feeding my money into the pot when it was my turn for the blind bets. I didn’t count how much of my stake was already gone, but I knew I would need a very hot streak to pay for my golf.

Still, I tried to keep in mind the wisdom of Doyle “Texas Dolly” Brunson. I’d spent my dinner hour reading Brunson’s tome on poker, Super System, like a delinquent student trying to cram in the hour before a final exam. “A solid player,” Brunson wrote, “is a player who’s tight about entering the pot in the first place, but after he enters the pot he becomes aggressive.” That was my game plan.

I immediately ignored it. I played a K-10 that lucked into a pair of kings on the flop. I played a 4-3 of clubs and lucked into a flush on the river. In the first ten minutes, I won back my tardiness losses plus thousands more. (In a poker tournament, the $50 entry fee becomes 10,000 chips, so my thousands in winnings probably amounted to about $25.)

Things went south thanks to pairs of queens. The first pair belonged to me. Seeing them, and following Brunson’s counsel to play aggressively, I pushed tangerine-colored thousand denomination chips onto the table as if they were nickels. One guy stayed with me. The flop showed an ace, and the turn card was a king. The guy bet five thousand. I folded, figuring I’d lost to a better pair. 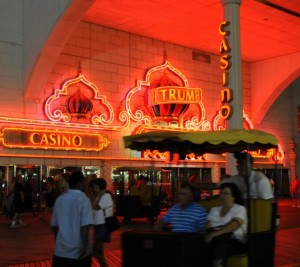 Taken for a ride on the Boardwalk. Do not collect $200.

Following that loss, I let myself get distracted. A player across the table in a tee-shirt from the Borgata started commenting on an old man sitting at the next table who had a tee-shirt decorated with the clubs, spades, diamonds, hearts–and fish. What did it mean? Was he the fish? I chuckled. I decided to play A-5 of diamonds and I bet two thousand. The guy in the Borgata shirt, still seemingly bemused, called. The flop came. Q-8-5. I had a small pair. The guy in the Borgata shirt checked.

Be aggressive. I bet four thousand. The Borgata shirt never hesitated. “All in,” he said, and pushed his pile toward the middle of the table. It was slightly larger than mine. I responded instinctively. I called. Seconds later, I saw the second pair of queens.

Suddenly, I knew who the fish was.

I’d lasted less than an hour. I couldn’t blame Doyle Brunson. “More than any other game, poker depends on your understanding your opponent,” he had written, and I had failed utterly to understand the guy in the Borgata shirt.

I’d rate the Trump Taj Mahal poker room a B-, thanks to that long line for the Taj card. That, of course, is a lot higher than the grade I’d give my own game. But I was not deterred. There were other golf courses and other casinos on my itinerary.

One Response to “In Search of a Golf-Poker Parlay: Atlantic City”