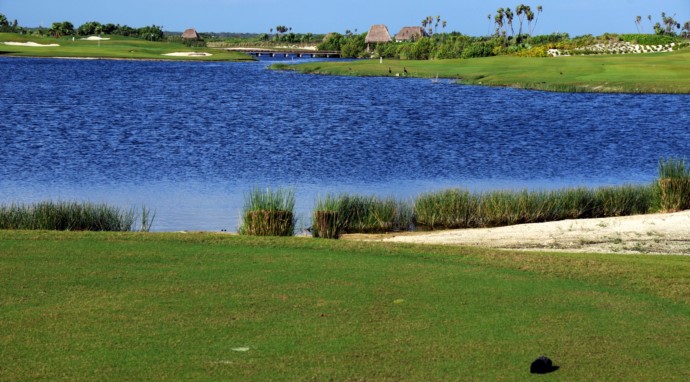 There are lots of ways to play No. 7 at Riviera Cancun, but they all involve water

By now it’s become commonplace to notice that as Jack Nicklaus has aged, his golf courses have gotten more playable.
Pop psychologists among golf writers theorize that the younger Jack rather arrogantly thought that anyone who wanted to shoot in the 70s ought to be able to do the things he could do: hit it long and straight off the tee, contemptuously stare down hazards, and bring it in to the green with a high, soft fade. The player who couldn’t do those things faced a long day on a Nicklaus course. In recent years, as age has inevitably brought Jack’s skills a bit closer to those of the common man, the theorists say Jack has subconsciously started to design holes that fit the game he has now. 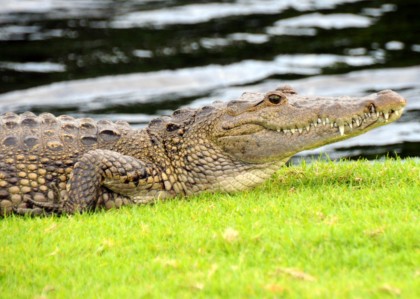 Some of the hazards at Riviera Cancun are alive

I personally don’t buy this. I do think Jack’s designs have become more playable. But I don’t think it’s because he’s getting older. I think it’s because he listens to his customers. He’s been in the design business long enough to be doing renovations of courses he designed twenty and thirty years ago. When the members tell him that they want him to change this or that aspect of their home course, Jack learns. He’s also become part of the effort to reverse the stagnation in American golf participation. So he knows that among the reasons people cite for playing less or giving up the game entirely are that rounds of golf take too long and the game is too hard.
Whatever the reasons, the newest Nicklaus courses seem to go easy on the features that most bedevil average players. You won’t find too many long, forced carries off the tee. You won’t find too many back bunkers behind greens fronted by water; instead, there are chipping areas that give the duffer the option of rolling his ball onto the putting surface. You won’t find too many long par 4s with bunkers thirty and forty yards in front of pedestal greens. Such bunkers get old very quickly for the hapless hackers who hit into them.
A case in point: Riviera Cancun, a 2008 Nicklaus design on the Mexican Riviera, a few kilometers from the Cancun Airport.  The course is owned by the company that owns the Palace Resorts chain, but it’s unaffiliated with any particular hotel and open to the public. It’s an examplary track for a winter resort area where a lot of the players are going to be people who haven’t touched a club for several months. 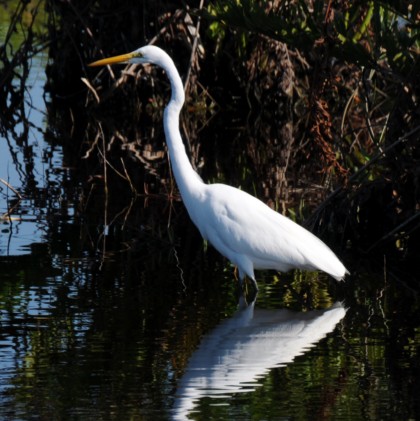 An egret fishes in a marsh by the 9th fairway

That’s not to say Riviera Cancun is short, dull, or easy. It’s not. It can stretch to 7,060 yards, though the white tees come in at a comfortable 6,200 yards and the reds at 4,913. It’s got acres of water and mangrove swamps (along with an impressive array of wildlife living in those habitats). But when water is in play, as it is on 10 of the 18 holes, the layout is such that the prevailing winds will nudge your ball in the direction of the fairway, not the hazard. The course has holes that require thought by providing multiple options to the player. What it doesn’t have: long, forced carries off the tees, front bunkers guarding greens and long bunker shots to greens on par 4s.

The first hole gives players a good sense of what’s in store. The forced carry off the tee is negligible; there’s a little  bit of sand and then golf grass through the green. The fairway is wide. Even if you miss it, there’s a marginal area of sand, dirt and pebbles before the ball enters thick, unplayable vegetation. There are fairway bunkers, but from the white tees, the guy who hits it 220 yards can carry the one of the right and won’t reach the one on the left. The original terrain was flat, and bulldozers have plowed some contours into the fairway and the green. But the contours are gentle; there are no awkward stances or tricked-up blind shots. A short iron into the green leaves a putt with a lot of movement, but the green isn’t so severe that you can put the ball in a spot from which you absolutely can’t two-putt.
One of the most strategic holes on the course is No. 7, a watery par four that plays 412 from the back and 371 from the whites. There are two possible routes off the tee. One, with a carry of anywhere from 287 to 178 yards over water, leads to a stretch of fairway that’s less than 100 yards from the green. The safer route, to the right, requires a water carry of less than 100 yards to a fairway segment flanked by water all down the left side. A decent tee shot down the conservative side will leave perhaps a 7-iron to the green, again over a short water carry. The closer the player elects to play to the water on the left off the tee, the shorter his pitch to the green will be. And because of the way the line to the hole turns, the direction of the wind will be different on the second shot than it was on the tee. There are lots of things to think about, lots of choices to be made. 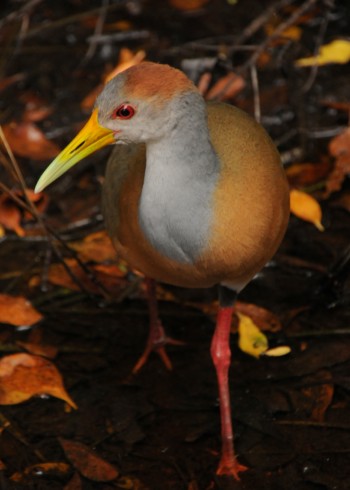 to reach the green in two. It becomes an issue for average players who hit a weak tee shot.  It makes players of all calibers think.
The back nine at Riviera Cancun gets tougher. The tropical forest and mangrove swamp crowd the fairways more closely. Carries off the tees to the fairways get a little longer. From certain angles, there may be a bunker to carry before reaching the green. All of the above is true for No. 18, the impressive closing hole, a par 5 of 530-389 yards.  There’s a forced carry off the tee, bunkers in play, water down the entire left side, and a green with some of the most severe contours on the course. A closing par or birdie will be well earned.
But even if the score is not satisfactory, there’s been a lot to like at Riviera Cancun. It’s in good condition, though there were a few bare spots in the 5th fairway when I played, due to a pest infestation that damages turf. Because it’s new and surrounded by wetlands and forests rather than hotel buildings, playing it is a bit like riding through a nature preserve. There are alligators and coatis, cormorants and egrets galore. You may even see rarer birds, like the gray-necked woodrail that hopped out of a wetland near the 15th tee and posed obligingly for a photo.
Riviera Cancun has another asset for the rusty golfer on a winter vacation. It has an excellent practice range and short-game area. It’s an easy course to recommend.

One Response to “Riviera Cancun: A Gentler Jack”