The 18th green at Kaluhyat requires a precise approach.

I badly needed a turn in my luck, and the omens seemed favorable as I drove into upstate New York. I was headed for Turning Stone, a golfing and gaming resort built by the Oneida, a part of the Iroquois federation. I was going to play a course called Kaluhyat. The implications of the name Turning Stone were self-evident. Kaluhyat, in the Oneida language, means “the other side of the sky.” I was more than ready to see the other side of my losing streak and succeed in my quest to pay for my golf through poker.

Turning Stone has three courses. Atunyote, by Tom Fazo, is the site of a PGA Tour event and the most lightly played of the resort’s offerings. Shenendoah, by Rick Smith, is considered the easiest of the three. Robert Trent Jones Jr. designed the course I would be playing, which opened in 2003. With a rating of 75.5 and a slope of 150 from the back tees, it promised to be a challenge. 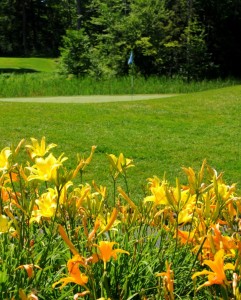 And indeed it was—tough and beautiful. Kaluhyat was built over woods and meadows of rich farming country. The soil nurtures great golf turf, and the Oneidas have enhanced the setting. The course is an Audubon International Certified Signature Sanctuary, and many holes are surrounded by untouched woodlands, wetlands, and areas of high native grasses. But in some patches, a gardener has been set free to cultivate daisies and lilies; at least for a moment they provide a distraction from the sting of a bogey.

Kaluhyat starts off fairly gently, with a short par five. And the next four holes–three short par fours and a pitch par three, can easily yield birdies. Then the gauntlet comes down.

The sixth at Kaluhyat, 554 yards from the back tees and 503 from the whites, is a great par five. A player who wants to reach the green in two can do so, provided he plays his tee shot over a pond and then carries his second over two hundred yards of marsh. There’s a safer route for the conservative. But unlike many par fives where the safe route is dull and requires no strategy, the three-shot path at No. 6 offers its own options and perils. There’s a marsh carry to bite off on the second shot and bunkers to avoid all the way to the green.

The course emerges from woodland into open meadowland at No. 7. Barns and silos form the backdrop, and the wind picks up. Nothing comes easily, especially after the 8th, when the player turns into the prevailing wind and heads back toward the clubhouse on this out-and-back layout. 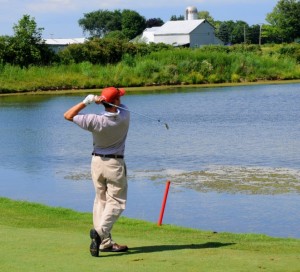 Parts of Kaluhyat once were farmland. The approach to No. 7.

On No. 7, the players contend with a large pond that can force long hitters to lay up. No. 8 is a pretty par three, 218 yards from the back tee, slightly uphill, over acres of high natural grasses that are brown and prairie-like in mid-summer. At No. 9, a long par four, Jones offers a dual fairway and a strategic option. There is a long carry over the grasslands and into the prevailing wind to a fairway segment that provides a more direct route to the green. There’s no carry at all to the safer segment of the fairway, but the route to the hole is longer.

The journey home can get penal. No 11 is a long par five which requires the player to carry two areas of marsh. At No. 12, a double row of bunkers guards the left side of the green. If a player (like me) pulls his approach, he can find himself (as I did) facing a 25-yard bunker shot that has to carry an intervening bunker. And on the 13th, a par five that fishhooks to the right around a lake, there’s no safe side to play. Seven deep bunkers flank the dry side of the fairway. At No. 16, the fairway narrows precipitously about 190 yards from the green, dropping off steeply into gunch on the right. The prudent strategy may be to hit an iron off the tee and a longer club to the green. I didn’t. I drove into the hazard and wound up making seven. I still won the hole from my playing partner.

I rated Kaluhyat an A. (To read how I rate golf courses, click here.) It’s beautifully conditioned, and it requires both thought and precision. But with its abundant hazards, it’s not for beginners. My round, on a Saturday afternoon, took almost five-and-a-half hours. A party of wedding guests was playing up ahead and evidently having a rough go of it. I could only hope the groom made it to the altar on time.

Unlike the Native American casinos in Connecticut, which sit within easy driving distance of both the New York and Boston areas, Turning Stone has no nearby metropolis from which to draw customers. The nearest city is Syracuse, twenty-odd miles to the west.  So the casino is correspondingly smaller. This provided me with a significant advantage: it was a lot easier to find my car after I lost.

The poker room is intimate and clubby. The dealers seem to know the regulars and they’re liable to tease a player after a poorly played hand and compliment him after a good one. The players, in turn, flip tip chips to the dealer on a regular basis. I’d rate the poker room an A for its friendly, laid back atmosphere. 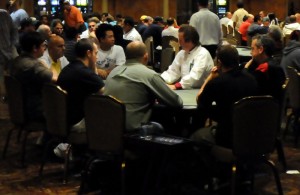 The Turning Stone poker room. All of these players are better than I am.

I decided to change strategy and play a cash game instead of a tournament. My idea was that if I won some hands early and doubled my $100 stake, as I had at Mohegan Sun, I could walk away with my winnings and consider my goal reached. It was a sound plan, assuming I won some hands. I didn’t.

I chose to play in a low stakes game of 2-4 hold ‘em, in which the most a player can bet is either $2 or $4, and the number of raises is limited. It was a mistake. The betting rules skewed the odds and percentages I’d learned in the no-limit games. If I drew a strong hand, say A-K suited, I could only bet $2 before the flop. There was no way to force the other players to pay dearly for the chance to see the first three common cards. Players hung around with seemingly weak hands and then saw them turn into two low pair, or straights or flushes. The suited A-K, a powerful hand in no-limit, was an iffy bet in the 2-4 game.

My stack of 100 chips dwindled steadily. I played my last hand an hour after I sat down, going all in with my last two dollars on a 10-4 of spades. To my surprise, a ten showed on the flop and another on the river. It was the first good luck I’d had. But it wasn’t good enough. A matronly woman across the table, wearing cat-eye glasses, filled in a flush.

I am a terrible poker player.

That doesn’t make me a terrible person. Does it?

2 Responses to “In Search of a Golf-Poker Parlay IV: Turning Stone”