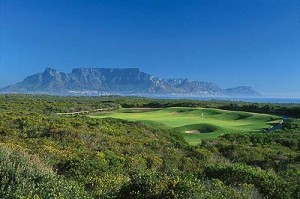 Golf in South Africa is particularly scenic with Cape Town's Table Mountain hovering in the background.

IF, AS THEY SAY, MEMORIES OF SOUTH AFRICA STAY WITH YOU ALWAYS, THE MEMORY THAT STAYS WITH ME MOST from my voyage around this glorious country is of hitting range balls on a Sunday morning in Swaziland.

My caddie, Shakespeare, is standing in the middle of the Ezulwini Valley surrounded by a horseshoe in the form of the Lubombo Mountains, retrieving the balls I hit from the corner of a soccer field and returning them to the brown bag that serves as my solitary target. Every dozen shots or so he moves the bag forward or backward, and I select a new club. There are no yardage markers; I am doing this strictly by feel. The idea is to not make Shakespeare move too much.

One day earlier, Shakespeare had caddied for me during a round of golf at the Royal Swazi Sun Hotel, Casino and Country Club. I had arrived at the resort with a group of travel writers late the night before, and as I walked out of the hotel early the next morning, squinting in the sun, Shakespeare’s wide smile and his eagerness to carry my bag had proven a welcome sight. For the second time in four days, I was in a new country. At that moment, I needed to be led by the hand.

Our group’s travel itinerary to that point had been daunting: After our 12-hour South African Airways flight from Kennedy International touched down in the capital city of Johannesburg, we had been immediately shuttled on a commuter flight to Cape Town for a two-night stay at the exquisite Table Bay Hotel — the first day of which remains obscured in memory by a haze of jet lag. Two days later we flew to Durban. Now we were in Swaziland, which — despite being surrounded by South Africa on the north and southwest, and on the east by Mozambique — is its own sovereign nation, albeit the smallest in the Southern Hemisphere. It is a country about the size of New Jersey.

Shakespeare, a gregarious 14-year-old with a resolute stride befitting his status as the family breadwinner, shouldered my bag as we led off the morning’s play. My fellow journalists, none of whom were golfers, had scheduled a sightseeing safari through a wildlife reserve later that morning, so I would need to finish my round in three hours in order to join them. Not a problem, Shakespeare had assured me.

The golf course at Royal Swazi Sun would rank as a very nice resort layout in the United States. Most of the better courses in South Africa would stack up well in the States. But make no mistake: Despite the fact that Gary Player and Ernie Els hail from these parts, one does not visit South Africa solely for the golf. There are far too many other things to do.

After we finished, I informed Shakespeare that I probably would not be able to play a full 18 holes the next day, but that at some point I would like to hit some balls on the range. Because our entourage would be visiting the resort’s casino that evening and would probably make a full evening of it, I hadn’t wanted to commit to a time. With a knowing smile, Shakespeare agreed to meet me at whatever time I could arise, have a cup of coffee and crawl over to the pro shop.

The following morning, the telephone in the room rattled my groggy head at 7 a.m. It was Shakespeare on the line. Where was I, he wondered? It was a beautiful day, he said.

So, there we were less than an hour later, hitting balls on a driving range that doubles as a soccer field. Shakespeare had been right. It was a beautiful day.

Enjoying the moment so much, I lost track of time, and afterward, I hurried to make it in time for a massage at the resort’s renowned spa before my group hit the road again. Shakespeare, for the first time in two days, seemed in no hurry. As we walked, he told me how he would like to one day come to the United States, and wondered if he could get a job caddying at a club.

I gave him my business card and asked him to please call me. I told him I would do whatever I could to help him.

Shakespeare, like many less fortunate locals, has used golf as a window to other worlds. I wouldn’t be surprised in the least to hear the phone ring some weekend morning around 7 a.m., and find that it’s Shakespeare on the line.

CAPE TOWN IS A CITY OF HAVES AND HAVE-NOTS. There are museums, symphonies, art galleries and high-end golf courses. Then there are shantytowns on the outskirts designed to house 300,000 people that bulge with more than two million, many without electricity. All in all, Cape Town is simply the most alluring city I’ve ever visited. The commanding presence of Table Mountain, rising 3,000 feet above the city and rugged coastline, is impossible to forget. It was this impressive landform that guided Portuguese explorers to this area in 1488, although it wasn’t until two centuries later that the Dutch came and, in their wisdom, stayed.

The blend of mountains and ocean form a stunning setting. The vineyards, golf courses, beaches, gardens and forests in and around Cape Town make a lengthy stay a must. James Michener came to neighboring Stellenbosch, a popular way station for wine-crazy backpackers, and stayed at the Meerlust Vineyard there, where he wrote ‘The Covenant.’ Given its diversity, it’s little wonder that Cape Town attracts an eclectic group of tourists: From wine buffs to surfers, rock climbers to club-hoppers; this is a city that has something for everyone.

If your time in Cape Town is spent at the Table Bay Hotel, it will be the vacation of a lifetime, guaranteed. Set in one of the premier tourism locations in the country, the Victoria & Alfred Waterfront, the Table Bay Hotel is a contemporary architectural treasure. Half of its 329 rooms face Cape Town’s working harbor and Table Mountain, while the other half overlook the bay toward Robben Island, where Nelson Mandela spent most of his 27 years of political incarceration.

Mandela, later South Africa’s first post-apartheid president and possibly the most admired man living in the world today, now resides much of the year in Cape Town. He helped open the Table Bay Hotel to great fanfare in 1997. Three years later, the hotel is a favorite among international celebrities such as Madonna, Michael Jackson and Europe’s best-known entrepreneur, Richard Branson.

The Table Bay Hotel mirrors the image of Cape Town — that of a haven built to serve the rich. Yet if Cape Town is more international and cosmopolitan, and Johannesburg is the moneymaking city, then Durban, the country’s third largest city, is its most ethnically diverse. With its blend of Indian, Zulu and European influences, this East Coast city exudes exotic flair.

OUR STAY IN DURBAN WAS BRIEF but memorable. The experiences I’ll remember most include dipping my foot into the Indian Ocean for the first time and haggling with street vendors along Durban’s colorful downtown marketplace. But the memory I’ll keep most was of a one-night stay at the amazing new Zimbali Lodge.

Zimbali (Zulu for ‘valley of flowers’) is situated on a magnificent estate in a protected, natural environment. The 76-room lodge epitomizes elegance.

Surrounding Sun International’s first boutique luxury hotel is an outstanding new Tom Weiskopf-designed golf course that should mature into one of South Africa’s finest courses. Weiskopf, one of the more successful player-turned-architects, has performed some of his best work at Zimbali — with an assist from Mother Nature: Panoramic views of the undulating coastline and choppy sea greet the golfer throughout his round.

Too soon, however, our traveling party departed Zimbali for Swaziland. After three days there, we then spent our last two nights at Sun City, home of golf’s Million-Dollar Challenge. My memory from Sun City? Quite simply, the most amazing, over-the-top place I’ve ever visited. Think Las Vegas mixed with Disney — then inject steroids.

The brainchild of South African hotelier and entrepreneur Sol Kerzner, this lavish development sprang out of the desert two hours northwest of Johannesburg like an oasis in 1979. While it may not fit everyone’s taste, you will never, ever visit a more opulent destination than Sun City.

The two golf courses, both designed by Gary Player, are as good as golf gets in South Africa, but even they pale when taken in the context of their surroundings. Anything would.

When it’s time to plan the most exotic golf getaway imaginable, think South Africa. The quintet of Sun City, Cape Town, Johannesburg, Durban and Swaziland will provide the trip of a lifetime and memories for a lifetime, as well.

One Response to “The Soul of South Africa”