GREENSBORO, N.C. — When PGA TOUR rookie William McGirt stood on Sedgefield Country Club’s fifth tee box Friday with five holes remaining in his second round of the 2011 Wyndham Championship, he figured he was likely positioned somewhere around the tournament cut line.

McGirt also knew there was a whole lot more riding on his final five holes than just making the cut. The ruddy, 32-year-old Wofford College grad entered the week as one of the Wyndham’s “Bubble Boys” at No. 127 in the FedEx Cup point standings, with only the top 125 in points advancing to the year-end FedEx Cup playoffs.

McGirt trailed the coveted 125th spot — currently occupied by a tie between Ernie Els and Camilo Villegas — by just two points, so he knew that missing the cut this week would do him no favors.

In addition, a berth in at least the first playoff event would allow McGirt a chance to pad his current earnings for the year — $329,479, which ranks 155th — as he also needs at Top-125 finish in year-end earnings to regain full PGA Tour status. If McGirt misses the playoffs, his next PGA start would come Sept. 29 at the onset of the season-ending four-event fall series.

Finally, the recent past didn’t necessarily enhance McGirt’s thought process, considering he had missed the cut at his last two events after making four straight.

So standing on Sedgefield’s fifth tee box Friday, with all that swirling around in his head, what did McGirt proceed to do? Only make birdies on four of his final five holes for a 6-under 64, propelling himself to 7-under for the championship and a tie for 10th place going into today’s third round.

“I went from biting my nails to playing my way back into the tournament real quick,” said McGirt. “You can’t win the FedEx Cup sitting at home next week.”

Of course, there are plenty of better-known names than William McGirt positioned just ahead and behind him on the playoff bubble. McGirt is tied with a guy named Tiger Woods at 318 points, and likely needs to finish at least in the top-50 this week to sneak into one of the final places. Also lurking not far off the playoff cutoff are former major champions Padraig Harrington (130th), Ben Curtis (131st) and Justin Leonard (147th), while world No. 17 Paul Casey is still alive at 147th.

While Woods elected to take the week off, all are the others were in this week’s field, and only Curtis failed to make Friday’s cut. “I figure if I finish in the Top 25 this week I should make it in the playoffs for sure,” said McGirt, “but there are so many scenarios.”

It’s been an otherwise frustrating rookie season for McGirt, who estimates that he has only spent 13 nights at his Spartanburg, S.C., home this week, and has missed six cuts this year by a single shot. “It’s been one of those crazy years where I played a lot better than I scored every week,” he said. “Just seems like every round has been the highest it could possibly have been.”

When he is at home, McGirt practices at his home club, Musgrove Mill, which like Sedgefield CC is owned by McConnell Golf. He thinks Sedgefield’s new owners have contributed considerably to the enthusiastic tournament vibe among his fellow contestants.

“I’ve always loved this golf course,” McGirt said of Sedgefield. “I’m a huge fan of Donald Ross courses and I think [architect] Kris Spence did a great job maintaining the integrity of what Ross did here.

“I think what McConnell Golf has done for all of the clubs that they’ve bought is phenomenal. They’ve improved the clubs and improved the golf courses, yet kept it affordable for the members. I think they really turned all the clubs around, and I think all the members are really happy. And these clubs are the best in the Carolinas.”

Despite the high praise for Sedgefield, when McGirt visits Greensboro he typically plays at another McConnell Golf property, cross-town Cardinal Golf and Country Club — a highly regarded Pete Dye design, on which McGirt won the prestigious Cardinal Amateur in 2003.

“Every time I come back to Greensboro I go play The Cardinal,” he said. “I love that place. I think it is one of Pete Dye’s best. I think when he renovated it [in 2007], he made it even better — and it was already really, really good.”

But Sedgefield CC and the Wyndham Championship are McGirt’s focus this week.

That, and what might come along with a good finish.

“Making the FedEx Cup would be huge,” McGirt said, “in more ways than one.” 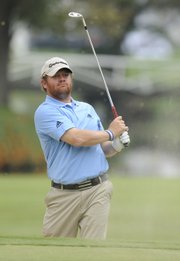